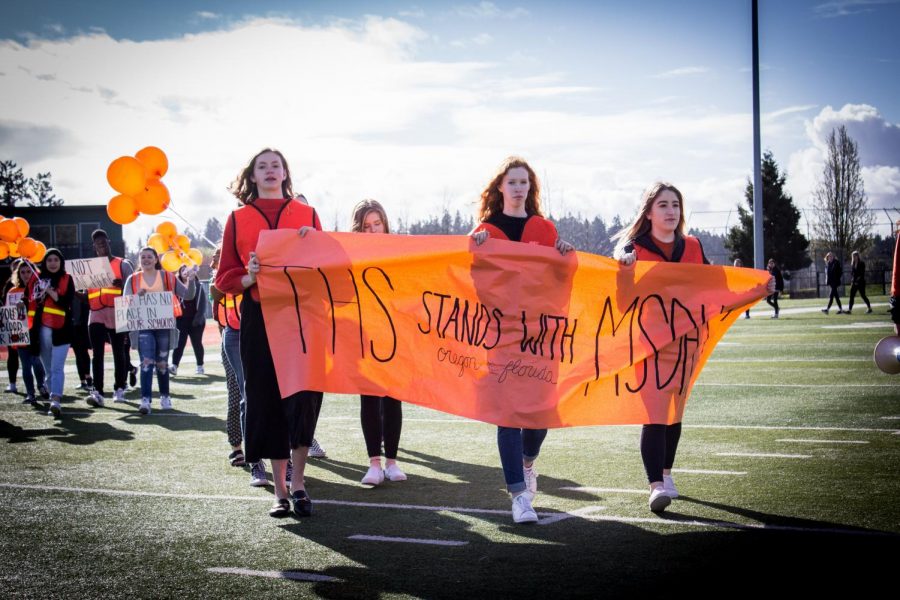 The student-led walkout as part of the March for Our Lives Movement was one event that defined 2018. Jessica Woolfolk, Meghan Turley and Baylee Berquist organized the walkout and held the banner.

I was inspired by the Parkland students, and spent my last year working intensely with the movement.

I remember where I was when I found out about what had happened at MSD. I was in my 3rd block publications class, and I remember not thinking much of it at first. As a nation, we have seemingly become so desensitized to these acts of mass casualty, that I didn’t blink an eye initially. But in the days that followed, the response nationwide to what had happened was unlike anything I had ever seen before. These kids weren’t silenced by what had happened at their school. They were motivated and angry, and they wanted to make sure that it didn’t happen again. I was motivated too. For seemingly, the first time in my life, I was seeing kids call out the systems that allow these shootings to continue to happen. The organizations like the NRA, which admitted earlier this year over $10 million dollars as a result of the movement, and the politicians who took money from it. I was inspired and drawn by their actions, and helped lead the walkouts and met with countless politicians to demand change. I joined March for Our Lives, and turned my anger into action. I met loads of people I wouldn’t have met otherwise, who I am now lucky enough to call my friends. But I can’t help but think that I shouldn’t have met them at all, because this shouldn’t have happened in the first place.

One year later, it seems like not very much has changed as far as gun laws in this country. But yesterday, HR8 which would create universal background checks on all gun purchases, passed in the house, and the “Keep America Safe Act,” which would ban high capacity magazines, was introduced. In Oregon, lawmakers have introduced measure like the controversial SB 501, a student written and student introduced bill; Governor Kate Brown has introduced HB 2251, which among other things would raise the purchase age on firearms; and HB 2505 would require safe storage of all firearms.

The last year has provided me with great insight into the legislative and democratic process, in a way I never imagined. I’ve learned a lot about other people’s view on the issue of guns in America and have been able to deepen and strengthen my own. I stand firm in the belief that gun violence is preventable, and not inevitable. This issue doesn’t just include mass shootings either. Gun violence includes police brutality and gang violence, as well as suicides and domestic violence incidents involving firearms.  Last year, over 40,000 people were killed died due to injuries sustained by firearms. Moving forward, I am a strong supporter of bills like HB2251 and HB 2505, and would love to see them passed. The experience I’ve gained with politics over the past year has sparked a deeper level interest in many issues for me. I want to major in political science or government in the future, and hopefully pursue a path in politics. But for now, I’m focusing on the present with this issue. And that means fighting for change to the best of my ability,  remembering those that were taken to soon by gun violence and fighting for them too.