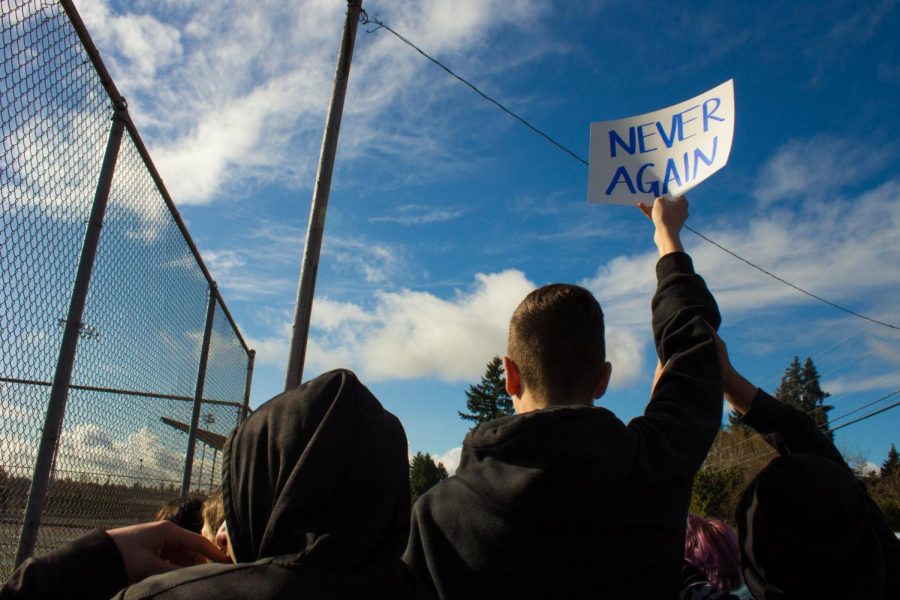 Students walk out on March 14. Student organizers explained that the walkout is to stand in solidarity with Parkland and also show lawmakers that students are calling for change in legislation on the issue of gun reform.

Students at Tigard High reflected upon the one year anniversary of the shooting, which affected millions of high schools across the nation. Senior Diana Angeles has not noticed that much of a difference in policy since the shooting.

“I guess it’s kind of still the same. I don’t think it’s changed a lot,” Angeles said. “Students have become more aware of the danger guns hold, and there’s been a lot of movement in the high schools.”

Angeles feels that schools and the government should take more action and responsibility when it comes to the safety of students in school.

“It is frustrating, because we’re going to be students for a long time. Most of us are going to have kids, or siblings at school and it’s frustrating that we aren’t able to feel safe in this environment that we spend 5 days a week at,” she said.

Junior Derek Nguyen remembers his initial reaction to the news about the Parkland shooting.

“The first thought that initially came to my head when I heard about the shooting was ‘oh, another one,” Nguyen said. “I also had empathy for the victims, especially since I could relate to this a lot as a high schooler. And the worst part, is that not much has changed.”

Nguyen recognizes that many schools, including Tigard, have made attempts to increase security precautions since the shooting.

“After the shooting happened the school took all these ‘security measures’, like they literally locked all of the doors except a few, but that was the only real thing I saw in response to the shooting,” he said. “Realistically, I don’t feel like that works or does anything to stop someone.”

Many students are honoring  the lost victims in the shooting at Parkland. Senior Alex Hyunh believes that gun control is a realistic step towards preventing more shootings, especially in school buildings.

“I feel so bad for the people who had to face that, and no high school student should ever experience what they went through,” he said. “I think we should implement more rules about who can own a gun to prevent more events like this from happening.”

Senior Medhawi Munankarmi also has a difficult time reflecting on the shooting at Parkland, recognizing how similar the victims were to many students in Tigard.

“I can’t imagine being in a situation, especially at school, where my life would be in danger, not knowing if my friends or I would survive,” Munankarmi said “Many of the Parkland victims were around my age and never had the opportunity to say goodbye or experience the many things we take for granted.”

She believes gun control is the best solution to ensure that something like this will never happen again.

“I am very pro-gun control and I believe that strict gun laws are critical if we want to reduce the ongoing gun violence,” Munankarmi said. “I don’t think guns should be entirely banned, but there should be a higher legal age, mandatory classes, and stricter background checks.”