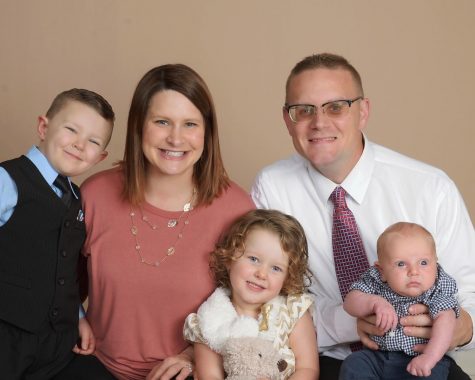 In the small city of Tigard, there is a man with dorky glasses, sitting in the activities room of Tigard High School patiently waiting for a call that could determine new life and a new adventure. Many students of Tigard High only know Tim Hummel as their Health 2 teacher; however, what they don’t know is that he and his wife had a little boy named Silas Elijah on Nov. 3 2017. The Hummels kept the gender of their child a secret until the day of the birth since with their other two children, they knew ahead of time.

“I have been preparing for this kid by buying things for it that we had gotten rid of initially such as clothes, diapers, food,” Hummel stated. “There is some mental preparation as well. And reminding ourselves like sleep schedules and stuff like that.”

Duffy Hummel (Mr. Hummels wife),being eight months pregnant, elaborated on the excitement of having that third child but also the nerves that it can cause being outnumbered by little ones.

“For this baby I’m more excited than nervous, as I feel like with each kid, anticipating the birth and meeting a new addition to the family is more and more precious,“ Duffy explained. “Since they grow so fast, I’ve learned to savor when they are so new, sweet, and teeny.”

For Hummel, values and morals are really important in someone’s life because it can define who you are as a person and how you strive to be. “We are Jesus followers in our family, so we want our children to know who Jesus is and we want them to really be able to help other people so they can see the need and help the need.” Hummel elaborated. “Hopefully, they get that example from us and being friendly and kind and giving back to the community. I want to teach them how to be successful in the world.” He further explained that he wants nothing but the best lives that he can give to his children because of how important of a role that they play in his own life. Most parents have that mindset because their children are the future, and they want their kids to have a bright one.

In order to make their futures brighter, they as parents must adjust to the new life of having three children.

“Sleep. Sleep is going to be a huge deal. I think also spreading ourselves around equally to each one of the kids,” Hummel explained. “You know when you’re outnumbered by more than two kids you really have to manage your time well, and it’s going to be a big challenge and I’m a little nervous about it because I want to make sure that I’m present for all of my kids.”

Over the years, the Hummels have learned a couple things. “Mainly asking other parents that we respect about certain situations that we know about education, how to raise our kids morally, ethically, and also doing research on sleep cycles and how brains develop,” Hummel said.

Preparing for a child is hard enough as it is, but having to raise two other little ones also makes the task a bit more difficult. However, Mrs. Hummel elaborated on how having Mr. Hummel around to help has been beneficial.

“Mr. Hummel is the best dad, friend, and husband. I think he’s doing it well, as he still manages to find the time to connect with our two kids, do the dishes daily, and rake the yard and clean the gutters.” Duffy elaborated. “I’m really blessed to have him to do life with. It’s not all cupcakes and rainbows, so it’s nice to have someone who sees past your faults and does life alongside of you, including raising little people.”

Not only does the birth of the child affect the parents, but it affects the siblings that he might have. Judah (the oldest at four years old) explained in a brief statement that he really just wants a buddy. Eleanor (now middle child at two years old) on the other hand said that she really wants to be a big sister.

The Hummels has been doing this “parenting” thing for a while now, and are finally willing to give out advice for future parents. “It’s all about timing. Get the school out of the way and travelling out of the way because it’s a big responsibility. Be there for your kids,” Hummel stated. “…don’t want to have kids? Don’t have them then. Kids are a blessing, they are a gift. So they should be seen as that. Do your research. Be prepared for a big, big change in your life.”

As the date approached day by day, the more exciting this wait became. Each day for the Hummels is a new adventure. The Tigard High community gives the whole Hummel family best of wishes for their new arrival!