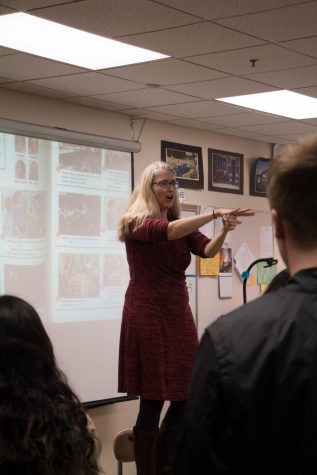 For most people, languages are the most annoying thing to learn, but for others learning a language is a fun way to connect with people. Julie Carlsen falls into the later group. Carlsen graduated from Willamette University in Salem, Oregon and has been able to travel and study in several places around the world. Although she learned Spanish first, she taught Norwegian for a summer, and English for several years. “I love languages and I love traveling and once you learn one, they all get easier as you go,” Carlsen said.

As a kid, Carlsen had been inspired by her parents (who were both teachers), her grandparents, and women who did amazing things. Although being a teacher was what excited her most, Carlsen also wanted to be an astronaut, an artist for Disney, and an oceanographer.

You’d think teaching two different languages all day, every day would get confusing at times, but not for Carlsen. “Ms. Carlsen teaching two different languages doesn’t affect the classes very much,” freshman Rietta Thomson said. “We may learn a word or two of French [during class] but otherwise, nothing is changed by it.” Thomson is a freshman, but after she took two years of Spanish in middle school, she was able to skip Spanish 1 and go directly into Spanish 2. “Being a freshman in Spanish 2 is challenging and slightly intimidating due to the majority of other students being older in the class,” Thomson said. “It also comes with a good feeling though, because you’re younger but you’re given the same work as others.”

Sophomore Ian Harrington is a French 2 student. He hopes to learn enough to be able to go to France for college and be able to talk to locals. “The culture is very different,” Harrington said. Harrington likes Carlsen’s class because she allows review before each and every test or quiz.

Carlsen is a very upbeat and positive person, and she puts all her energy into teaching her students.  Even though she just teaches Spanish and French, she tries her best to teach her students about how to view the world in a practical and optimistic way. “I want them [my students] to leave high school excited for the next adventure, caring more about the world than before, not afraid to try different languages and to think about things bigger than themselves,” Carlsen said.

Carlsen has a one-year-old daughter, Sophie, who spends the day at the Little Tigers Daycare while Carlsen teaches. Carlsen loves having her daughter so close to her during the school day, “She’s the greatest adventure of my life.” Parents and children always have a close bond, but this mother-daughter duo may have taken the cake on this one.

“Ms. Carlsen reminds me of my sixth grade science teacher, Ms. Scheller. They are both very funny, kind people who help a lot and make sure we know what we are doing in class at all times,” Thomson said. Not only does she remind students of amazing people, but Ms. Carlsen is an overall amazing teacher, mother and person.