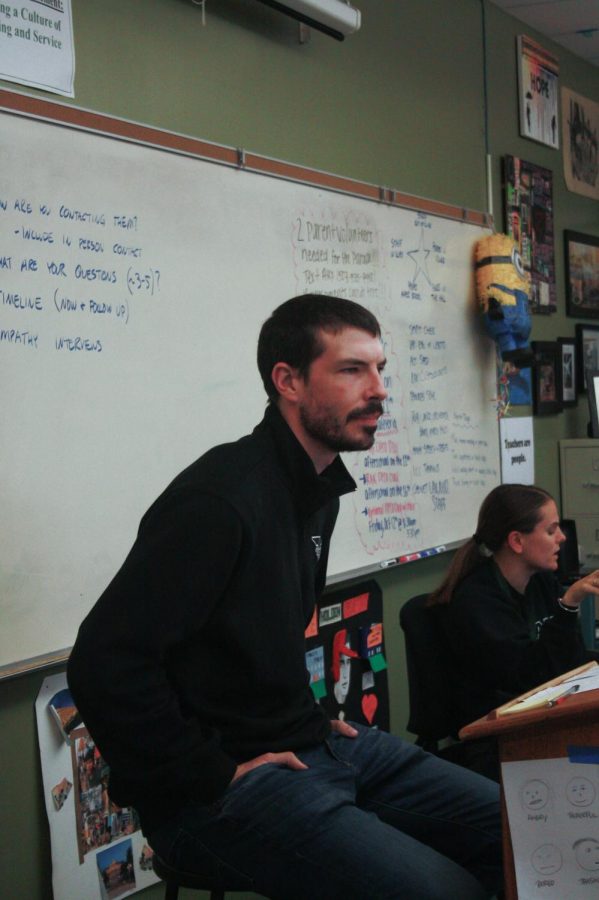 Jesse Abell advises leadership, and coaches volleyball. He may be sad when he looks at his paycheck, but he is still happy with his choice!

Jesse Abell might get sad when he looks at his bank account, but he still loves what he does.

Q: What is your favorite sport to play/coach?

A: “My favorite sport to play is volleyball. And people always ask me do you like coaching volleyball or basketball better, they’re so different I cant put one above the other one. I like them both but they are completely different.”

Q: When did you start getting into sports? Specifically, which ones?

A: “I guess when i was in middle school is when I really started playing sports. By the end of highschool I had lettered in XC and football and golf and track and wrestling. So I did 5 different sports in highschool.”

Q: Who was your biggest role model/somone you aspired to be as good as?

A: “I didn’t have a famous athlete role model growing up but I had a couple of coaches who I really looked up to and learned a lot from. The person who I aspired to be as good as was Kevin Naugunst. He was just the biggest, strongest, fastest kid in our grade and he was the quarterback on the football team. He played basketball at clark after we graduated from high school. Did the same events as me in track. We overlapped in everything he was just slightly better than me at everything.”

Q: Where did you learn to coach so well?

A: “Because I went to school to be a PE teacher I learned a lot about motor learning and development. Some coaches just have to do what they were coached and since I actually know some of the science about it and the way I was coached. Now I’m a little bit more open to learning new things because I know that theres a scientific way of learning things that is more effective.”

Q: How are you going to keep up coaching/playing sports in the future?

Q: What were some goals you had as a kid?

A: “[The] Football team was really bad, so my goal as a junior was to win a game, we won one and then we were like 500  my senior year so we turned it around with a new coach. I think I’ve always wanted to be able to go on to be a coach. Even when I was younger a a junior or senior I liked to work and help the freshman.”

Q: When you couldn’t perform well in a sport how did you handle it?

A: “By getting really mad. Thats why I cant do sports like golf. I like sports like basketball because when you get mad you can just play harder and in volleyball when I get frusturated I try to funnel it into playing harder but that doesnt really make your passes better or your shots better but you can set better screens and get more rebounds.”

Q: Why did you choose the sports you coach, what about them do you like?

Q: Are you looking forward to this volleyball season? Why?

A: “I’m very excited, I think if we can finally get over the hump were gonna do pretty well. I also really like our players this year. And last year our combined GPA was something like 3.9 so its a bunch of really smart really nice athletes I like to be around.”

Q: Do you ever regret taking the coaching/teaching carrier

A: “Whenever I look at my bank account I regret it. But for the most part I’m pretty happy doing what I do.”