Persevering with Packed with Pride

The program aims to unite community volunteers to collect food, books, and other supplies for families in need during the Coronavirus outbreak 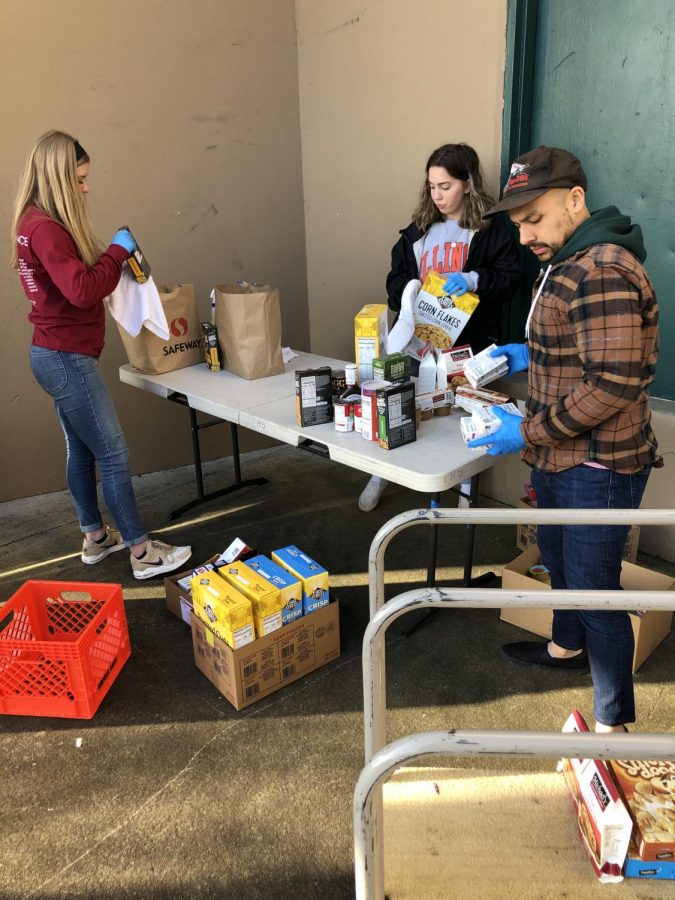 Student and community volunteers work to sanitize food before sorting it. So far, Packed with Pride has collected commitments from over 500 volunteers.

As the Tigard Tualatin School District (TTSD)  enters an unprecedented time with school being cancelled through April 29, one group of community members is working to help those in need.

Packed with Pride aims to unite community volunteers to collect food, books, and other supplies for families in need during the Coronavirus outbreak and period of school closures. On March 14, a volunteer Google Form went out on organizers’ Facebook pages, and in less than a week, they had gotten commitments from over 500 volunteers.

Student leader and Tualatin High School Student Matt Brown says the outpouring of support from the community has been cool to watch.

Lucy Feuerherdt  is a Senior at Tualatin High School who volunteered for Packed with Pride Wednesday morning. Feuerherdt was like many other students, disappointed with the cancellations of events she was looking forward to senior year, like her final year of state competition for dance. Nonetheless, she found herself motivated to volunteer.

“Even though this is a tough time for everyone, it’s really hard on a lot of families in our community,” Feuerherdt said. “I really wanted to help those families that needed food and supplies, and after three days of laying on my couch it was nice to get outside and have a purpose.”

Feuerherdt got involved with volunteering after hearing about the project from Matt Brown. About a day later she received a text asking when she was able to help, and the next day she showed up at 7:45 a.m. for her first shift.

Courtesy of Ben Bowman Organizers have been shocked with the outpour of community support. Earlier Wednesday morning, an entire truck of Oatmeal was donated to relief efforts.

Volunteers were given strict parameters as sanctioned by the Oregon Health Authority. No groups more than ten volunteered at a time, and volunteers are actively practicing social distancing, in addition to frequent hand washing. All supplies were cleaned and sanitized before distribution, and the program implemented a curbside drop program to ensure those donating could avoid contact with volunteers.

After completing the rigorous preparation process, supplies were expected to begin being delivered next week, during spring break.

“We need to focus our priorities on things we can control.” Shresta said. “Getting food to people in need is something we can do, and that’s kind of why we put it together. A lot of volunteers with nothing else to do can come together and do something to help our community in this time of need.”

Those interested in volunteering with Packed with Pride can signup via this link: https://docs.google.com/forms/d/e/1FAIpQLScPFX6VSF6uRkqhZyltBE5XS8AVtbKOBUgeUnW2xjXRq__1oA/viewform?fbclid=IwAR3WLIMFPgDiqqUxHHqHY0LwFgX2O1l4prJ_iH7QkDiMK-H1vlxYySElVjE

They are currently accepting donations and are particularly looking for rice, beans, soups, canned tuna and/or canned chicken, potatoes, apples, and onions.