Life as a student: canceled until further notice

The school district and Governor's office agree: school out until the end of March to slow coronavirus 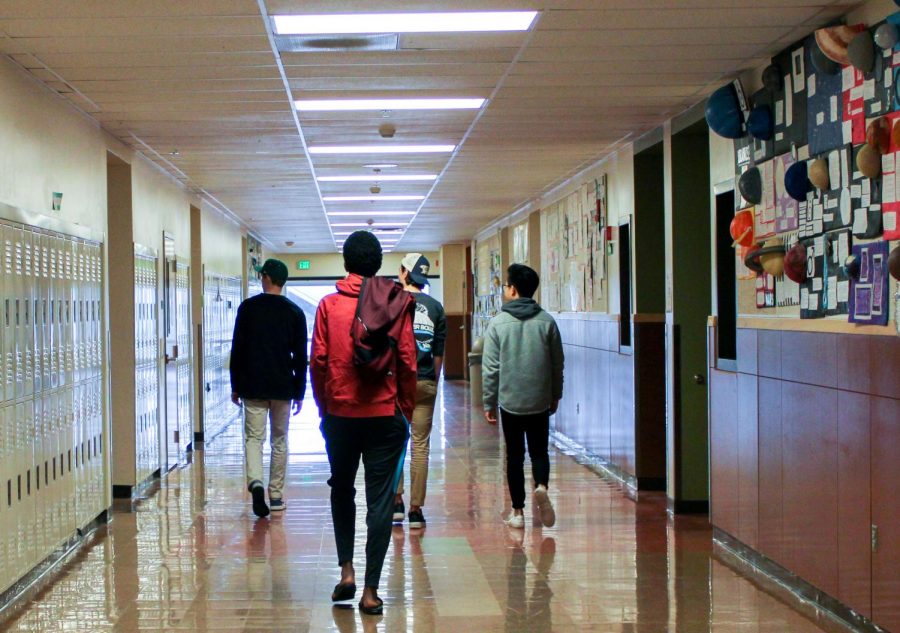 Although TTSD cancels school on March 13, students could come in and pick up books and computers. A group of junior boys wandered through the empty science hall.

By Katelyn Wilhoit and Olivia Niemi

COVID-19 caused by the novel coronavirus has become the word of the day after the country, state, and this school district have come out with closures, rules and regulations on how people are meant to prepare and keep safe.

With multiple emails, press conferences, school board meetings and news going out to the public, it doesn’t matter anymore if the coronavirus has infected a Tigard student or someone they know, it has affected everyone’s day-to-day life. Governor Kate Brown issued a mandatory statewide school closure lasting from March 16 through March 31 hours after the Tigard-Tualatin and Lake Oswego school districts had already shut down school starting on March 13. Brown also presented many restrictions that will last the next four weeks including a ban on all organized events exceeding 250 people.

Juniors Caitlyn Cannon and Rachel Denham were wandering the halls Friday morning trying to find someone who could let them into a classroom to get their ceramics projects after the abrupt news of school being canceled the night before.

“The teachers haven’t really contacted me about any work, but mostly it’s affected my volunteering and sports activities,” Cannon said.

COVID-19 first surfaced in a Chinese seafood market in Wuhan, China. The first identified case was declared on Dec. 31, and the first known death was on Jan. 11 in China.

The first case to present itself in the United States was a Washington resident from Snohomish County who had recently returned from Wuhan. Currently, there are over 1,700 known cases and 41 deaths in the US. On March 8, Gov. Kate Brown declared a state of emergency. On March 10 the World Health Organization declared it a pandemic. In Oregon there have been 30 confirmed cases (as of press time) with no deaths and no recoveries.

The Tigard community has been trying to prepare for the virus if it comes here taking any and all precautions needed to keep everyone safe. During this confusing time, the students are looking towards administration and the district for answers, but even they are unsure of what the outcome of this event will be.

“I feel like things are uncertain right now; we have no idea what’s going to happen next,” Associate Principal Tyler Davila said.

The Tigard-Tualatin school board held an emergency meeting creating the outcome of shutting all schools down for six school days. This news came as a shock to the community; ultimately the district is taking the steps necessary to stay safe for the students as that is the most important priority for the district.

Prior to the closure, the district office sent out a mass email on information on what the schools will be doing to try and keep Tigard safe. They announced the suspension of all non-essential, school-based activities in order to follow the new state guidelines. This includes all field trips, assemblies, music, drama, stem events, all competitions along with meetings that include parents and all volunteers.

Initially, spring sports were allowed to continue with the exception of no spectators at games or practices. Now, with the closure of all schools, OSAA’s new guidelines announced all spring sports are suspended until schools resumes on March 31.

“The biggest thing is that it has impacted our ability to play sports,” Denham said.

Cannon also expressed how her spring break like many others has been affected. While she is still planning on going to California her trip has been widely altered.

“A bunch of my college tours got canceled and Disneyland got shut down,” Cannon said.

“We partnered with the Oregon Health Authority, the CDC, Washington County Department of Health, with our district and other districts to increase the frequency and amount that we sanitize hard surfaces in the building,” principal Brian Bailey said.

Along with keeping the school building clean, the district has also been spreading awareness to the staff and students on ways to keep everyone safe.

“You should always continue to wash your hands on a regular basis for 20 seconds or more” Nurse Jenifer Tyree said. “That is the best way to prevent the spread of infection”.

The district’s main concern and top priority is the wellbeing of its staff, students, and families. To follow the new regulations surrounding school activities, Tigard High School unfortunately had to postpone Unity Day. It had been a long planned event to help unite the student body, but it involved students gathering together in large groups, and at 10 p.m. the previous evening Gov. Kate Brown had ordered schools to cancel any assemblies or large gatherings. However, the administration still sees it as a very important event and plans on rescheduling the event for later in the year.

To learn more and stay updated about the district and state’s regulations, go to the Tigard-Tualatin school district website.