Remembering the 17 victims on the first anniversary of the shooting. 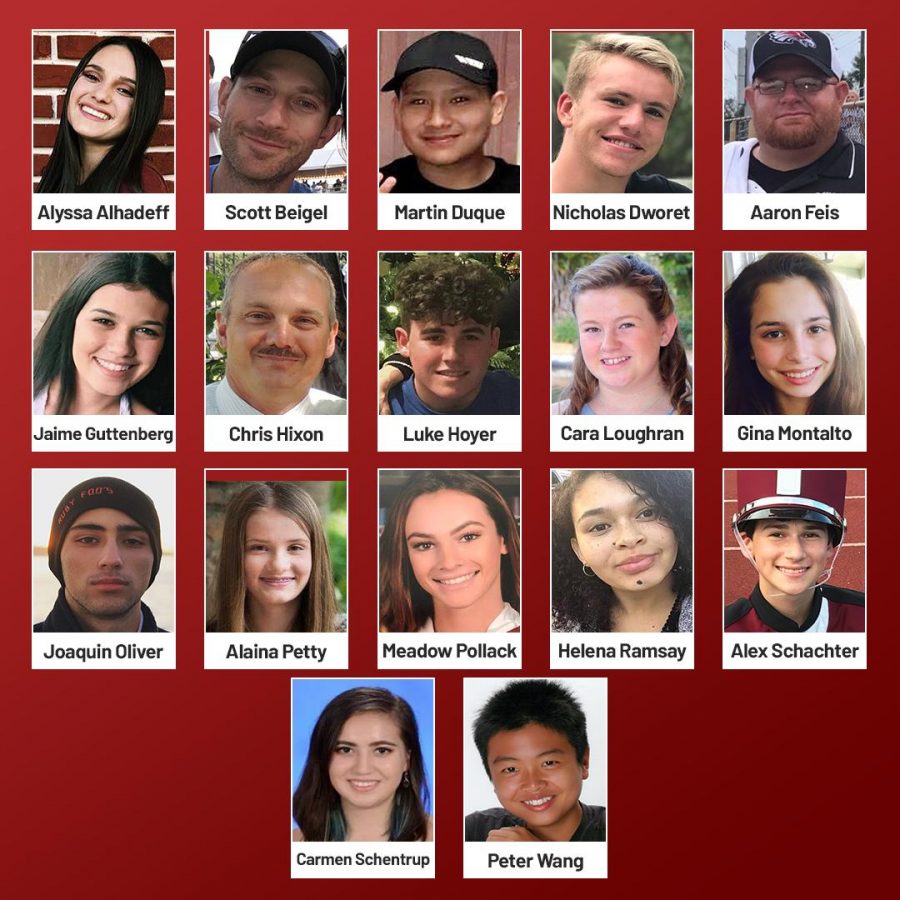 Courtesy of March For Our Lives

Feis was an assistant football coach and a campus monitor at Douglas. He was killed after jumping in front of students to protect them. Feis left behind a wife and daughter.

Alyssa played soccer for the Parkland travel soccer team, and eventually wanted to play for the US National team. She was described by friends and family as passionate, intelligent, and kind to everyone. Her mother, Lori Alhadeff won a seat on the Broward school board this year with a platform of school safety.

Scott Beigel was shot unlocking the door to a classroom while the shooter was in the hallway, and is credited with saving the lives of many students. Beigel coached cross country and also taught geography. Over the summer, he worked as a counselor at Camp Starlight in Pennsylvania and had recently gotten engaged to a fellow counselor

Martin Duque Anguiano was one of three cadets honored by the U.S Army Cadet Command after the shooting. He was the son of Mexican immigrants and a freshman at MSD. Anguiano’s friends described him as funny and outgoing kid, who was loved by all of his family.

Chris Hixon’s wife described him as an awesome husband, father and American. Hixon was the school’s athletic director and is remembered for giving back to the community. He was a naval reservist and was deployed to Iraq in 2007. Chris Hixon also coached wrestling at MSD.

Gina Montalto served on Douglas’ winter guard team. Her friends and family remember her fondly, describing her as kind, caring and always smiling. According to the Miami Herald, she also was a Girl Scout, a church volunteer, a soccer player, and a great student.

Nick Dworet had committed to swim for the University of Indianapolis and had earned an academic scholarship. His family said that Dworet dreamed of swimming for the U.S team by the 2020 Olympics. The University issued a statement following his death saying that “Nick’s death is a reminder that we are connected to the larger world, and when tragedy hits in places around the world, it oftentimes affects us at home.”

Jamie Guttenberg loved dance and gymnastics. She was a freshman at MSD and spent much of her time volunteering with a program that helps people with disabilities. Following her death, her father Fred Guttenberg became an outspoken advocate for gun reform and founded Orange Ribbons for Jamie, to help raise awareness for gun violence.

Luke Hoyer loved basketball, and is remembered by his family for being an amazing individual who was always smiling. He was described as a quiet and good natured friend, and he looked forward to trying out for the football team at Douglas.

Carmen Schentrup was named one of the 53 National Merit Scholarship Program semifinalists a day after she was killed. Schentrup played three instruments including piano, and was excited to start college. Carmen wanted to be a scientist and find a cure for diseases such as ALS.

Peter Wang participated in the JROTC at Douglas and was passionate about helping others. He was one of the three students honored with the U.S Army’s Medal of Heroism. Peter was last seen holding the door open for other classmates to escape. Wang aspired to attend West Point, and was wearing his uniform when he died.

Cara Lougham was a passionate Irish dancer at the Coral Springs Drake School, who loved going to the beach and watching the Baltimore Ravens. Her death was confirmed by a family friend who saw her last during the shooting.

Meadow Pollack was described as a sassy and confident girl who had a “smile like sunshine,” according to Rabbi Brad Boxman, who knew Pollack. She planned on attending Lynn University in Boca Raton, and was known to have a close relationships with her family and friends.

Helena Ramsay was gunned down when she put the life of her friend before hers. As the shooter approached the classroom, she instructed her friend Samantha Grady to shield herself with books as he entered. Ramsay was described as a joyful, selfless, and giving person. She loved cats, and even had up to 13 in her care at one point. She planned on going back to England with her college plans. Her friends and family made a hashtag-#HTMBGITW- Helena the most beautiful girl in the world, to honor and remember her.

Alex played baritone and trombone in the school marching band and orchestra. In the wake of his death, his family set up a scholarship fund in his honor.

Joaquin “Guac” Oliver was from Venezuela and had received his U.S citizenship the year before. After receiving the news about his death, many friends and family posted their remorse and memories of him on social media. He loved his family, friends and soccer. He had many Instagram posts with his family and proudly represented the national Venezuelan soccer selection.

A loving, non-judgmental, and kind person is how many friends and family describe Alaina. She was a member of the Latter-day Saints, and had joined the JROTC to follow the legacy and footsteps of her brother, Patrick. She wanted to be a cadet to honor her country and help in her community.

If you want a picture to show with your comment, go get a gravatar.