Feathers and Flames: How the September wildfires affected the community 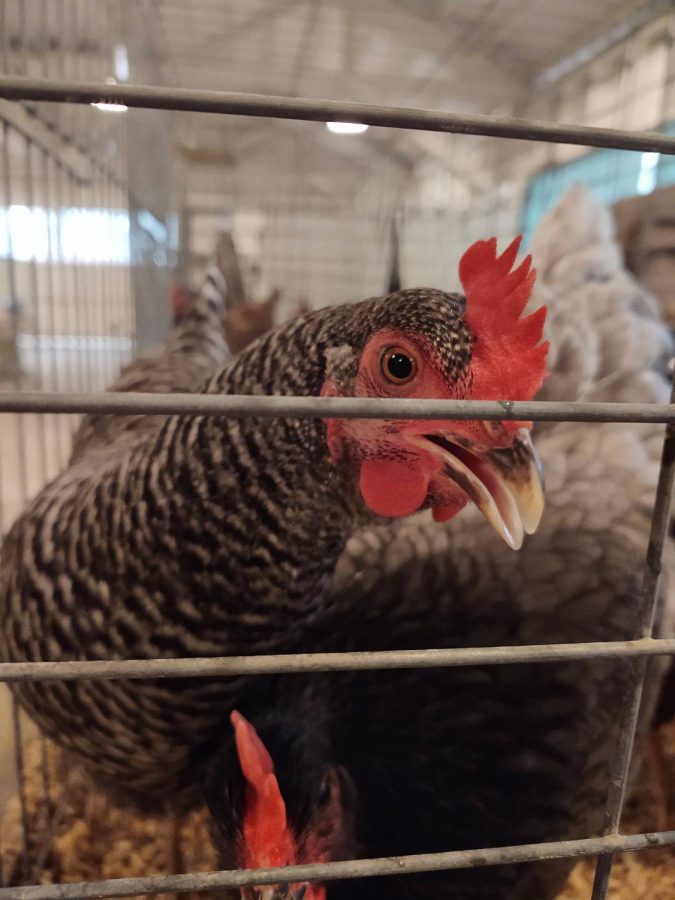 Wildfires displace animals. The Clackamas County Fairgrounds became a place where families and animals could evacuate.

When I woke up on Sept. 16, 2020, the sky was a hazy orange and the sun shined an apocalyptic red. By the time I had finished my breakfast, which consisted of two aspirin, one banana, and one glass of almond milk, I was ready to begin my day before I had to begin my duty as a 4-Her at the Clackamas County Fairgrounds Emergency Animal Evacuation site.

I made sure my new kitten was well taken care of as she snoozed with her body half off the side of my bed, and then made my way downstairs to take care of my rabbit. A small bunny that was moved inside due to the overwhelming smoke from the wildfires just a few miles away from my house.

Personally I didn’t have to evacuate, but my friend who housed my sheep and goats on their property did. By 6:15 a.m. I was writing what had become my daily texts to make sure everyone was safe. After the confirmation of their safety was sent my way, I was able to relax as my mother drove me to the Clackamas County Fairgrounds where most people were not able to breathe as easily; literally.

Making sure my boots were on snugly and my mask was on my face, I greeted the two women who had volunteered to welcome the displaced families with animals who escaped to the fairgrounds.

I looked to my right and saw over a hundred tents, RVs and trailers full of people who had nowhere else to go. To my left were piles of donations that varied from foods, to clothing, to water, to toiletries: all the items these families couldn’t bring with them.

Walking over to the white barn doors, the air nipped my neck as I slid them open. I yelled good morning to all of the animals, talking to them in a sweet voice and turning on the overhead  lights.

First I filled all of their dishes with water, that day being the highest number of over 200 animals I had to take care of alone. Of course the ducks would quickly empty their bowls by splashing the water out, making my job harder. I also remember the geese bit my ears that morning as I fed them, and the turkeys pecked my arms more than usual.

After feeding, I checked on the chicks and made sure they were warm enough.  As I did this, a boy around my age came into the barn and said that we had a family that was moving out to Idaho with their animals and they were coming to pick up some chickens. Quickly we loaded the animals in a covered truck bed filled with straw, and repeated this process with two other families.

When the third family came in, I was asked to help them load 36 sheep into two trailers because the owners were over 80 years old and couldn’t do it alone. The sheep were stressed and the haziness of the smoke around us scared them, making it difficult to load them out.

After about 45 minutes, I was back in the small animal barns where a few animals caught my attention. Two rabbits had runny noses, but what really made me pause was a young rooster that was droopy and sneezing constantly.

I took him out, and after further inspection I realised that this animal had Mycoplasma Gallisepticum, also known as Chronic Respiratory Disease. I called the owners and within 20 minutes, I was putting the poor bird down.

I had never killed a fowl by wringing its neck before, and it weighed heavily on me as I cleaned out the cages of animals that had left.

Before I knew it, my mother was picking me up and I sat in the car pulling out my phone and opening my ‘Canvas’ app. I looked out the window and could see part of the wildfire flames on a hill in the distance.

It was a Wednesday, meaning at 10 a.m. I would have to have my Social Emotional Learning check in with my history class. They didn’t see the tears running down my face as we watched a video on cyberbullying. None of them said anything about why I am in a car. They just minded their own business, and I sat in the front seat knowing that the effects of these fires won’t just be done once they are put out.

The fires that burnt down homes, farms, and animals. No, they will make an impact on our communities for a length of time that is still unknown.