Stokeley Goulbourne, also known as Ski Mash the Slump God, stopped by Portland during The Stokeley Tour to perform for excited fans. 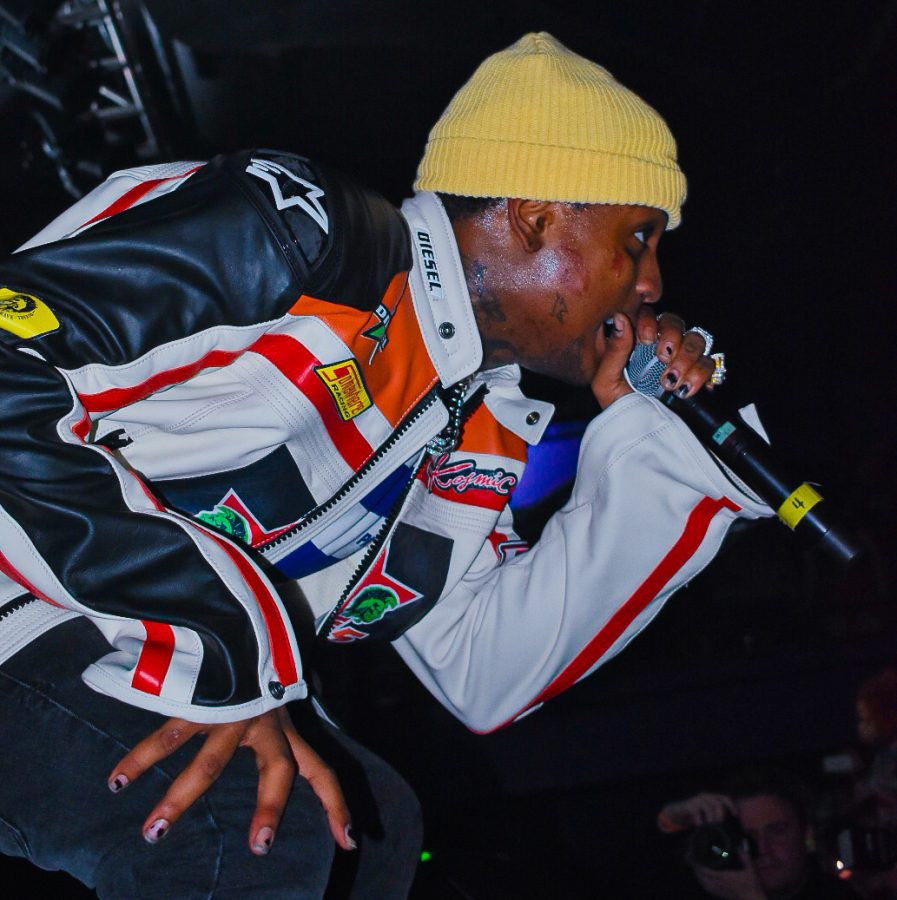 Stokely stuns the crowd at the Roseland Theater in downtown Portland. He preformed such hits as BabyWipe, Take A Step Back, and SAD!, originally preformed by his fallen friend XXXTentacion.

It was 5 p.m. on Thur. Nov. 14, and already excited fans were huddled around the Roseland Theater. Anticipation was high as they waited for the doors to open at 7 p.m. for Ski Mask the Slump God and his crew.

On tour for his latest album, Stokeley, released in 2018, well known rapper Stokeley Clevon Goulbourne, aka Ski Mask the Slump God, along with lesser known rapper Pouya, DJ scheme, and Danny Towers took on an energetic crowd of around 1,000 for The Stokeley Tour.

The Roseland Theater, located in the heart of Downtown Portland, gives off a retro-punk vibe upon entering the front doors. The walls are coated in vintage concert posters and framed headshots of famous performers, offering a warm and welcoming atmosphere when entering the foyer. Once upstairs, the actual location of the concert, I could feel the excitement through the floorboards. As the speakers blasted oldies such as “Hypnotize” by The Notorious B.I.G. and “Can I Kick It?” by a Tribe Called Quest, friends and strangers alike gathered together expressing their excitement for the night to come. Some pushed their way to the front of the barricades, while others rushed to the merch table to snag whatever sweatshirts and shirts that were left from the tour. A very icy DJ scheme hoodie featuring a devil, I might add.

The first to grace the stage was rapper Danny Towers. He had a deep voice that was full of animation, demanding the crowd to brace themselves for what they were about the experience. He was right, for what was to come was a night like no other. Following Towers, the crowd sang along and jumped to fellow rapper Pouya’s hour-long performance. Before attending Ski Mask’s concert, I had never heard of Pouya, but upon leaving I had a new and great appreciation for another artist. Although not many knew of Pouya, he still had the incredible ability to engage the audience in his performance, getting everyone hyped up and anxious for the artist we were there for, Ski Mask the Slump God.

Finally, it was time for the headliner to approach the stage. Ski Mask started off his set in full force with the performance of “BabyWipe,” one of his most famous songs. This song is often considered his “rise to fame”, released in 2017 to his mixtape “YouWillRegret” on SoundCloud, where he first started launching music in 2015. I was lucky enough to be allowed access to The Pit, the space between the artist and the crowd, separated by barricades and a number of security guards. While in the pit, I was quickly starstruck to be in such close proximity to an artist I have loved for years. The audience felt a similar entrancement. Right off the bat, the venue was filled by the screams of Ski Mask and the demanding tone of “I better see the whole [email protected]&ing floor”, thus establishing a massive mosh pit. The audience was comprised mostly of teenagers and young adults, charged up and ready for some craziness. Within the first 10 minutes of the performance, a groups of girls could be seen pushing their way out of the mosh pit, as one of them had passed out and was in need of some water revival.

Some may consider this whole ordeal chaos, however I found it to be exhilarating! All throughout the show, the audience, the performers, and even the security guards were shaken to the core by the bass and energy received and emitted by everyone.

During the middle of Ski Mask’s performance, he wound down the vibe with a heartwarming tribute to the late rapper Jahseh Dwayne Ricardo Onfroy, known professionally as XXXTentacion or X. Ski Mask and X often referred to each other as best friends and family. Upon X’s death in 2018, Ski Mask took it upon himself to make sure his image and spirit never died. DJ scheme set the tone, stating “This tribute isn’t only for X, it’s for everyone in the audience who’s lost someone they love.” Ski Mask insisted that the audience sang along to X’s most popular songs, “SAD!”, “Jocelyn Flores”, and “Look at Me!”. He even paid tribute to X by jumping off the second floor balcony of the Roseland into the crowd, something X had done two years prior while on The Revenge Tour. Long live X was the ultimate message given by Ski Mask that night.

Ski Mask ended his spectacular, animated concert with my personal favorite song by him, “Take A Step Back.” All of the energy and anticipation built up was released with the bass drop in this lively and explicit song.

Jason Marchand of Double Tee Concerts/Roseland Theater gave me the multimedia press pass to cover the event for my school newspaper. It was the first concert I have ever covered. Ultimately, I was impressed and thrilled by the insane, live performances of Danny Towers, Pouya, DJ scheme, and Ski Mask the Slump God; it was definitely a night to remember!