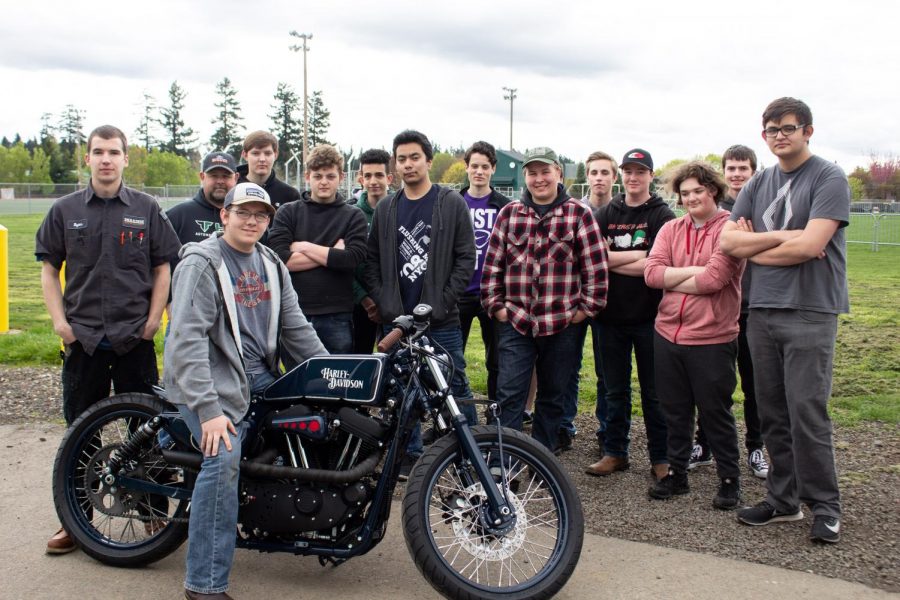 Junior Sterling McKinnon poses with Portland Flyer the bike he helped modify for a world-wide custom motorcycle competition. The Auto Electrical class gathered around to see the results.

Junior Sterling McKinnon needs Tigard’s vote in the Battle of the Kings 2019.

The bike is called Portland Flyer and voting is now open in this international event.

McKinnon plans to pursue a career working with cars. He thoroughly enjoys the Auto Tech classes here, and has recently put about 20 hours of labor into an internship at Paradise Harley-Davidson. He worked with several professionals modifying and replacing parts on a Sportster model for a world-wide custom motorcycle competition.

Every year since 2015, the motorcycle company Harley-Davidson has held the Battle of the Kings Event, a competition for custom-built motorcycles. Contestants around the world submit motorcycles, and a winner is determined for each country by a combination of online voting and professional judging. The winners are then sent to Milan, Italy, where a world champion will be selected.

Paradise Harley-Davidson, a dealership here in Tigard, has entered two past competitions, and has a third being voted on right now. For this year’s entry, the dealership decided to partner with Tigard High.

“Everybody has somebody from a high school or vocational program helping them,” said Jon Alen, the Crew Chief of Paradise Harley-Davidson. Alen contacted Auto Tech teacher James MacDonald to offer a spot on the team, who told his Engine Repair class about the opportunity.

McKinnon was the only student to take up the internship.

The experience turned out to be quite educational for McKinnon.

“I learned a lot about bike motors, I learned how to lace a wheel….I was watching [mechanics] as they were fixing customers’ bikes too,” McKinnon said.

Modifications to the motorcycle included a custom gas tank, replacement of the rear fender, removal of the front fender, custom handlebars, a custom muffler, a custom front leaf spring, and replaced turn signals, most of which McKinnon worked on.

Also working on the project was Ryan Vitkoczy, who graduated from Tigard High in 2014. He took all available Auto Tech classes, then attended vocational school to become a technician. Vitkoczy was the reason Tigard High was chosen to select a student intern. He is now a Class A technician at Paradise Harley-Davidson.

“It’s been a blast,” Vitkoczy said about his job with Paradise Harley-Davidson. “This is the first job that I can say that I look forward to going to every day.”

Vitkoczy found that he very much enjoyed working with automotives in his high school days and decided to make it a career. He recommends that students “do whatever [they’re] interested in” instead of getting a job solely for money.

“If you have something that you want to do,do that,” Vitkoczy said.

McKinnon is quite glad to have the internship under his belt, and hopes that it will increase the likelihood to be accepted to a trade school or college. Whether or not it does, the learning and experience alone will have McKinnon more prepared than most for an automotive career.