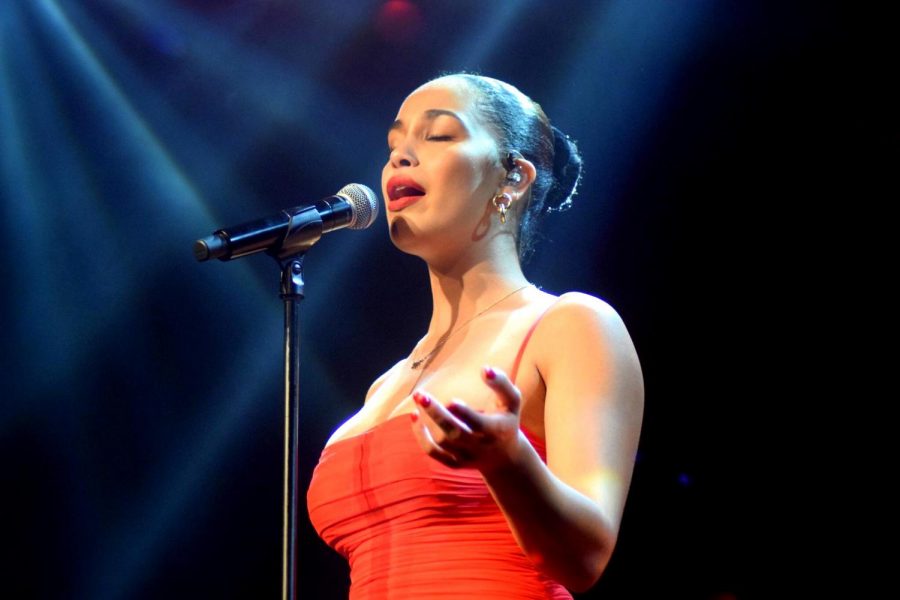 Styling a red dress and white Nike Air's, Jorja Smith is awed for her natural and effortless beauty. At only 21 years, this extremely accomplished artist left her previous job as a barista to pursue her passion in music and singing.

Lines of eager fans wrapped around the Roseland Theater on Wed. Nov. 21 as they welcomed the well-known artists, Jorja Smith and Ravyn Lenae, to Portland.

On tour for her latest release, Lost & Found, Smith has been one of the most influential and eye-catching artists for the 2018 year. Following the hype and talent of Smith is Lenae, who has been travelling with Smith for her tour and also had an EP released this year, Crush.

The Roseland Theater venue was smaller than most concerts I have attended, but the closed-in space between the artists and audience made for an intimate and personal performance. The backdrop for the artists was a simple patterned drape, and the relaxing vibe came together as the lights were somber and iridescent on stage. There wasn’t any moshing or people bumping into each other since it was a chill concert, and socializing was a popular down-time activity during the transitions between performances. Overall, the relaxed demeanor of the audience made the concert feel more welcoming and inviting to all fans and new listeners.

The opening act came from Lenae, and her bubbly personality paired with her unique vocals shined throughout her act. Before attending the concert, I knew a few songs and bits of information about Lenae. After seeing her perform live, I became so humbled to finally know this artist. Lenae has this ability to grasp the attention of any listener and make them love her; from her personal anecdotes to relatable comments about teenage love, the crowd thoroughly enjoyed her presence and charismatic qualities.

Not only was Lenae a loveable performer, but her music composition kept people moving and dancing. Some of my favorite songs performed by Lenae were Sticky and The Night Song; both from her latest EP. The electrifying guitar from the band combined with Lenae’s effortless vocals felt groovy and upbeat.

After a strong opening performance from Lenae, I started to become anxious to finally see Smith. Not only have I followed her music since she debuted on Soundcloud with Blue Lights, but I have been a huge fan of her style and projects outside of her music career. From appearing on shows as a guest speaker to modelling, Smith is talented in a variety of ways that contributes to her fame.

And when Smith entered the stage, fans screamed and lifted their phones in the air. Despite how confident Smith appears on social media, her demeanor felt somewhat timid and modest. The first few songs she performed were the only words Smith spoke to the crowd, but as she became comfortable and more in-tune with the crowd, she started to become more outgoing and social with the audience.

Not only does Smith have an adorable British accent, but she too has a unique vocal range and charisma when she performs. Smith performed a rendition of On My Mind and Where Did I Go? which added a nice surprise to her track performance. Contrasting those songs, was the deep and emotional Let Me Down that made the room fall silent with only echoes of her voice. Her song ordering was strategic and worked well from beginning to end.

Overall, my concert experience was a unique night, which was filled with heartfelt tunes and running around in a photo pit for the show.As a student journalist, this made the concert meaningful to me since I was able to take photos of influential music artists in my generation and share this special experience with other students.  I received multimedia pass for the show which allowed me to take photos throughout the concert and document the evening. This was all thanks to Sean Healy Presents, a company who booked Smith’s tour show. I was impressed with the live performances from Smith and Lenae; it was a concert to remember.