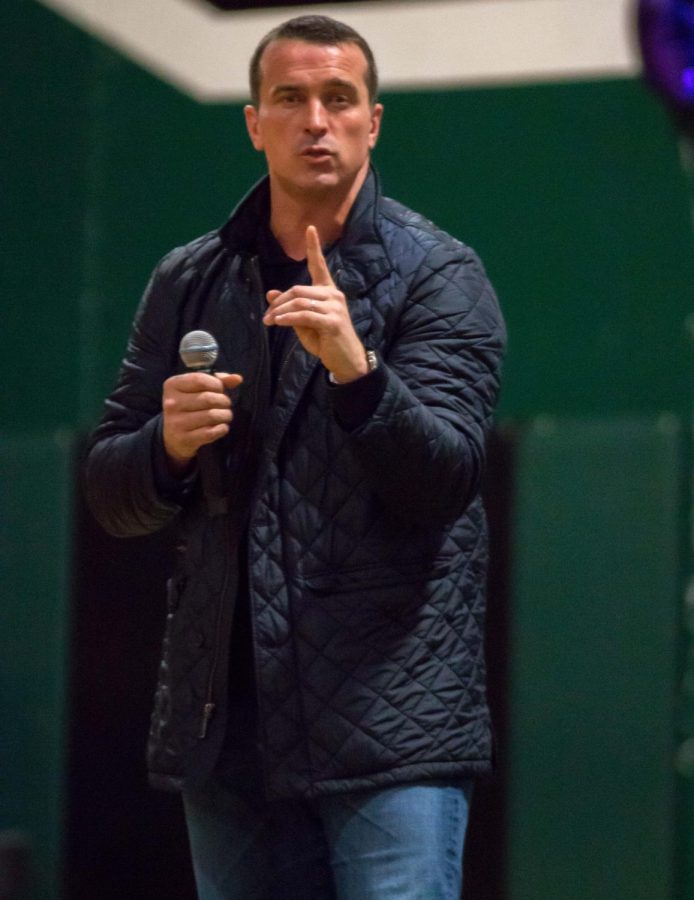 On March 5, the THS community had an unusual change of schedule to host a special end of the day assembly to create awareness about the dangers of drug addiction. Former NBA player Chris Herren was the guest speaker.

Many of Tigard High’s students were moved by Chris Herren’s powerful words during his assembly. His stories of students he helped over the years brought many to tears as they realized how intensely drugs and alcohol can destroy lives and tear families apart.

“It shows real life examples of someone whose life was turned upside down by drugs but he still got it back under control. Kids in high school who are still dealing with drugs can see someone who went through that and turned their life around,” sophomore Anika Voth said.

Herren explained how he was just like many others with the mentality of, “That will never happen to me,” or, “I’m not going to turn out like that.” He warned that once addiction sets in, you become trapped. Even though the hour and a half long assembly seemed to last forever, those who actually attended got something out of it.

“Overall the assembly did accomplish what we wanted to, which was bringing awareness about addiction and drug use. I am sad our assembly was at the end of the day because we had, as usual, a bunch of students leave and some of them would have benefitted from hearing the message,” Head of S.T.U.D.D. club Connie Jolley said.

Herren’s words made students think about their own lives and how drugs have impacted them.

“It provided me with the viewpoint from someone else’s life and how it affected their life. An example of the bad things that can happen if you do those things. Just how detrimental it can affect your life,” junior Chad Swanson said.

But to some, this was just another “don’t do drugs” assembly and the message didn’t impact them at all.

“Well, I am not someone who does drugs but I know a lot of people who do and when  [Herren] said to just talk to them, I was thinking, ‘It’s harder than that.’ What do you tell someone who is gaining popularity from doing it? You really can’t because it consumes people. It’s really hard. And it takes more than talking,” freshman Abdi Mohamoud said.

S.T.U.D.D. club hopes, those who were touched in some way by the assembly will be the ones who put an end to this epidemic instead of just pushing it under the rug.