Student freedom of speech: who decides? 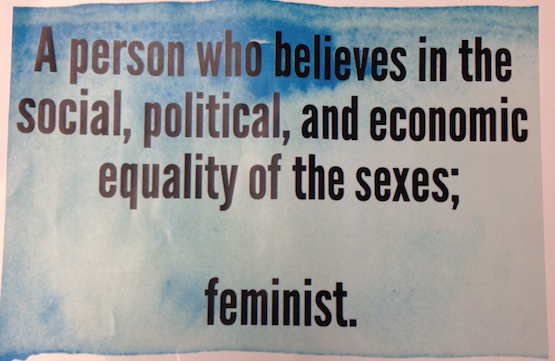 The advertisements through Tigard High’s hallways catch eyes with fundraisers, club meetings, even art. Last week, however, a battle of censorship caused one I.B. art project to be taken down by principal Mark Neffendorf. Posters reading “A person who believes in the social, political, and economic equality of the sexes; feminist” banned from the school arose controversy and questions throughout the student body.

“I thought, ‘that’s a pretty neutral standpoint, it doesn’t label you as anything’,” said the artist, senior Paris Courtney.

Courtney describes herself not only as a feminist but as an advocate. Courtney’s prohibited art project, an accurate definition according to Merriam-Webster dictionary, captured her voice in an attempt to inform her peers of the word constantly dropped among social media and modern conversation. The idea began as a way to identify the label and explain it, but Neffendorf’s authority claimed the end result of taking them down, while Courtney’s other posters (reading “Want gender equality? Fight for it!) remained hung around the school in colorful paint design to capture attention. Courtney admits that her principal told her they couldn’t be put up, but she displayed them against his decision.

“He didn’t want that label, although he did say he believes in gender equality, so he didn’t want me to put them up, which I think is a very good reason to,” Courtney said.

Neffendorf, on the other hand, found the posters to be too controversial to keep in a school hallway. He spoke about the matter saying, “I think later on once we kind of get out there what we’re trying to accomplish, and the student body knows what we’re doing, it could go up. But to throw that up with ‘here’s what this means’, I knew what I would be dealing with.”

J.J. Caufield, senior at Tigard, finds flaws in both parties. “The law says that he’s in charge of the school and it’s his responsibility to make sure education happens right within the school. If he thinks that these posters up on the wall are going to hinder that then he has grounds to prevent that,” he said. “That being said, I think that, to a certain extent, there isn’t a lot of proof of feminism obstructing education.”

The posters did not break any Oregon student expression laws, however everything that goes up in hallways must be seen and approved by an administrator such as Principal Neffendorf.

“Students have the right to express their opinion as long as it’s not disruptive to the school,” Neffendorf said. “We [administrators] do have the right, and I would say that it’s probably the law, to make those judgements.”

Controversial clubs and organizations in a school environment can publicize what they’re about, whether it be gender equality or racial issues, as long as they follow school policy. Other advertisements in hallways create a gray area for what is allowed and what would be considered too troublesome for students.

“It is subjective. I might say no, another principal might say ‘yeah I don’t care’. But that’s the right that’s been given to us, to try to do the best we can,” said Neffendorf.

Tigard teacher Amber Manning felt the situation could be a learning experience. “ We need to find a way to have productive conversations about the best way to educate people and move forward without having people overreact or directly disobeying people’s decisions,” said Manning.

Courtney continues to look for ways to education people and communicate the issues feminists face. After researching why “feminist” has a negative connotation to some people, she came to the conclusion that the label of the word ruins what is supposed to be an act for women equality. “I think it says more about the school that they got taken down than the fact that somebody made them in the first place,” she said.

The art class, Courtney’s car, and even various teachers around the school house her posters where the student body will not see them. Neffendorf commented on the art teacher’s project by saying, “There was nothing illegal, there was nothing that was profane, so if she wanted to allow the poster to be made, I didn’t have an issue with it.”

Manning, just one of Courtney’s many supporters, explains why involvement in a movement as disputable as feminism can be difficult for a student. “Especially when you’re a young person, you have to think about the way you can reform the system without pushing yourself so far out of the system that you can longer have a voice that is heard anymore.”

As for senior artist Paris Courtney, her fight to have her voice heard will continue to spread through the school by peers, social media, and her encouraged art. “I almost am glad they got taken down because that gives more fuel for people to fight for this,” she said. 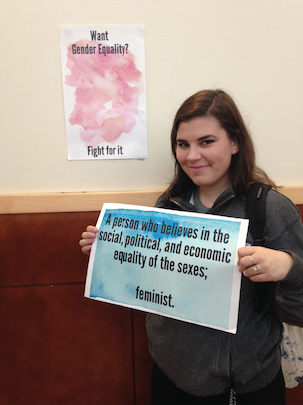