They may not be able to go to nationals, but Tigerettes keep dancing 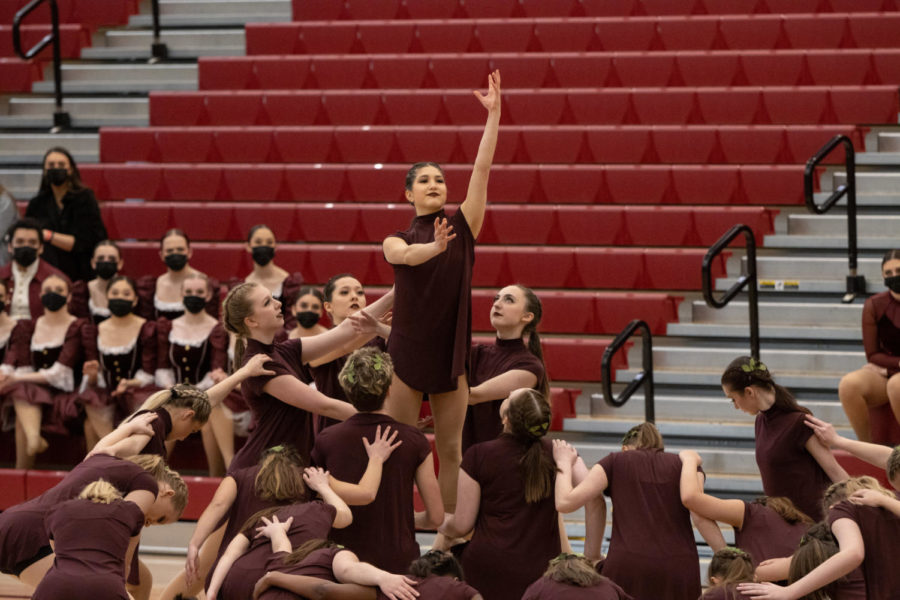 Senior captain Jamie Toda, competes in the Sherwood dance competition on Feb. 19. The Tigerettes finished in 1st place against five other teams in the 6A group. “We were definitely nervous with our competition, as the teams we were going against are very talented! We just went out there and did what we love to do and it was successful,” Toda said.

They danced their way to win at a competition held at Sherwood on Saturday, but they haven’t figured out a way to dance to nationals this year.

The Tigard Tigerettes are a national and state championship high school dance team, who have been struggling to keep up the momentum during the pandemic. When the pandemic hit in March of 2020, all practices and competitions were put on pause. 610 days later, a small bit of normality came back when the Tigerettes attended their first competition since March 8, 2020.

Things weren’t exactly back to normal. From Jan. 11 until Jan. 24, extracurricular activities were put on pause again, a feeling of deja-vu for the team, and the team and coaching staff made a decision to cancel this year’s trip to nationals.

As a junior and senior class, this is feeling oddly familiar. One day before the team was supposed to board a plane for nationals in 2020, COVID canceled everything.

“I’ve been frequently reminiscing over my freshman year and maybe it’s just because COVID changed everything, but I miss everything about my freshman year on the team, all of the tigerette traditions were so important and fun; not that they aren’t fun anymore, it just feels different,” junior London Gambill said.

With the senior class being the only people on the current team who have gone to state championships before, the rest of the team has not had the opportunity. Pre-pandemic, every other year, the team went to Nationals. They were held in Anaheim, California, at the Anaheim Convention Center. In 2019, the Tigerettes won state, making them the reigning state champs, but 2019 was not a nationals year. The next trip was scheduled for 2020.

“We as a staff trust that this team will rise to the occasion of any challenge that comes their way, they’ve already shown us that they can,” Head Coach Elissa Boudreau said when asked how she felt about three-quarters of the team not having a “normal” season yet.

Alumna Laura Masters who graduated in 2021, had the experience of going to nationals as a freshman in 2018.

“Going to nationals when I was a freshman was honestly one of the best experiences in high school for me. The thrill of performing, the joy of being surrounded by your teammates that are basically your family, there’s so much that goes into it,” Masters said.

But having 29 girls packed into plane seats, four girls to a hotel room, and three to a bus seat makes it completely impossible to get there with the worldwide pandemic.

“This was an incredibly challenging decision and one we hoped we wouldn’t have to make,” Boudreau said.

Dancers of all grades were hurt and upset but realized the best they could do was be positive about the situation.

“Fortunately we were able to make the decision early enough in the process that we could shift gears and focus on the task at hand rather than it being canceled further down the line, which would’ve been even more disappointing,” she said.

For the freshmen this year, this was a big deal—nationals in their first year of dance team. Since they were new dancers to the team, this could’ve been a big bonding and collective moment as a team after a season of hard work. They had to come into this season not only new dancers but hungry ones for that national championship.

“Nothing has changed my amount of dedication towards this team. Even though I am devastated that nationals are canceled this year, all I really felt about it was that now I just have to focus on the next big thing which is state,” freshman Lisa Cannon said about her dedication to the team.

“The best memory I have with this team is category championships just because of the amount of excitement everyone had that day. Also winning 1st place in contemporary was really just the cherry on top,” Cannon said while sharing her favorite memory from the team so far.

Category championships are a ranking of teams in the state before the actual state competition.

After winning first place in Contemporary every competition and ranking superior in Pom, the Tigerettes are extremely strong.

“They are a strong and resilient team, I’m excited to see what this season has in store,” Boudreau said.

At the beginning of the season state and nationals was the goal. State is still the goal. This year’s state theme is “This Bitter Earth” featuring music from Dinah Washington. This dance is a tribute to the changing climate and the earth. The Tigerettes will be competing this routine at state competition on March 18 and 19.