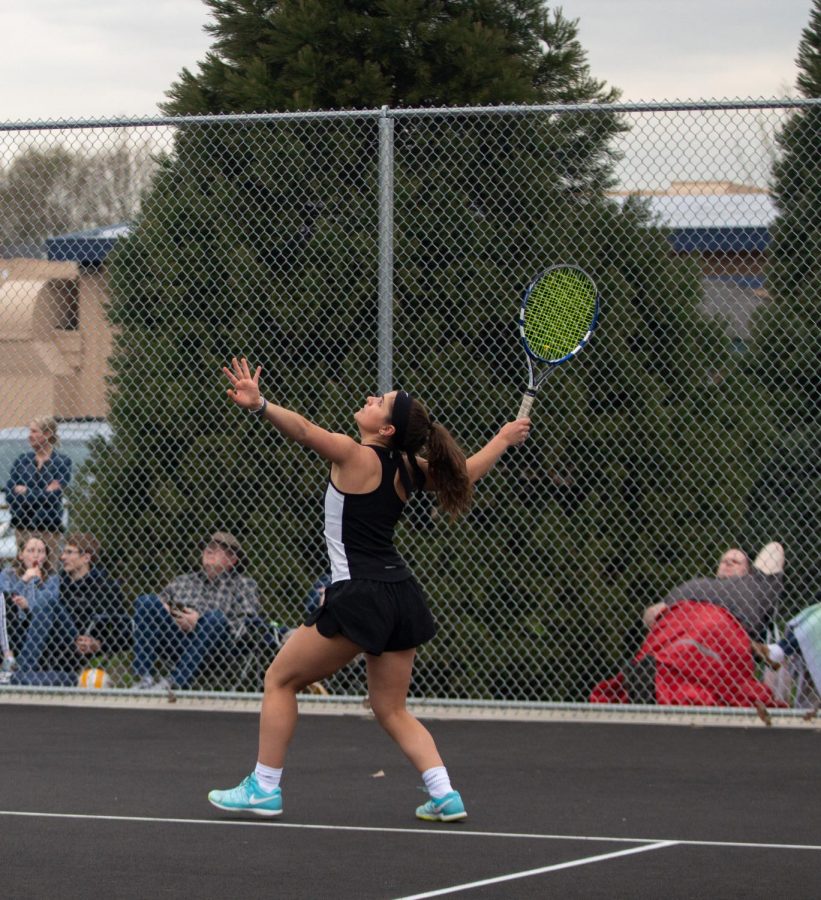 By Ashley White and Rachel Jacobson

In spite of the freezing winter winds, the girls tennis team is bracing to endure the weather these next few months. The tennis season started on March 2, with practices taking place Monday through Friday after school. The girls team has three coaches; assistant coach Gretchen Dumestre, volunteer coach Courtney Roshak, and head coach Kelsey Wahl. Wahl, one of Tigard’s chemistry teachers, graduated from Tigard in 2012 and was a member of the tennis team. She began volunteering for chemistry teacher Robert Massey after earning her degree in chemistry from the University of Oregon and her Master’s in Teaching (STEM Education) from Pacific University. At the time, Matthew Rubric was the girls tennis coach.

“I wanted to get involved with the tennis team, [but] I didn’t know the coach at the time,” Wahl said. “I asked him if I could help, became the assistant coach, and then eventually when he switched schools I took over.” Wahl officially became the head coach in the spring of 2017.

The assistant and volunteer coaches, like Wahl, have their own history with the girls tennis team. Back when Wahl was the volunteer coach herself, Roshak was on one of the teams that she coached. As for Dumestre, her daughter played on the tennis team when she went to Tigard.

In order to be a member of the tennis team, players need to bring their own racket and tennis shoes. They are also required to attend all of the practices and matches and pass five out of the eight classes. On top of that, all tennis players must maintain values of commitment to the team, integrity, and positivity.

“I started [in] my freshman year,” Elamin said. “I knew I wanted to play, and I bugged Ms. Wahl about when they were starting so much.”

Aside from the game itself, Elamin expressed that she appreciates the team’s positive attitude.

“We don’t have any drama,” Elamin said. “Everyone is always super happy.”

Senior Citlali Nieves and Ellie Dodson are two of the team captains. Dodson has been playing tennis since middle school while Nieves started in her freshman year.

“I am in charge of running warm-ups [and] I also have to make sure all our players feel welcomed and have an amazing experience while learning and playing a new sport,” Nieves said. “My job is to make sure the team is united and we have fun.”

Wahl values the Tigard team’s dedication to the sport.

“It’s a simple sport, and it doesn’t require a lot of equipment,” Wahl said. “You don’t have to have any experience to enjoy the team; our team at Tigard is a big team […] and very welcoming.”