Stepping up their game

Improvements to the softball facility are almost complete. 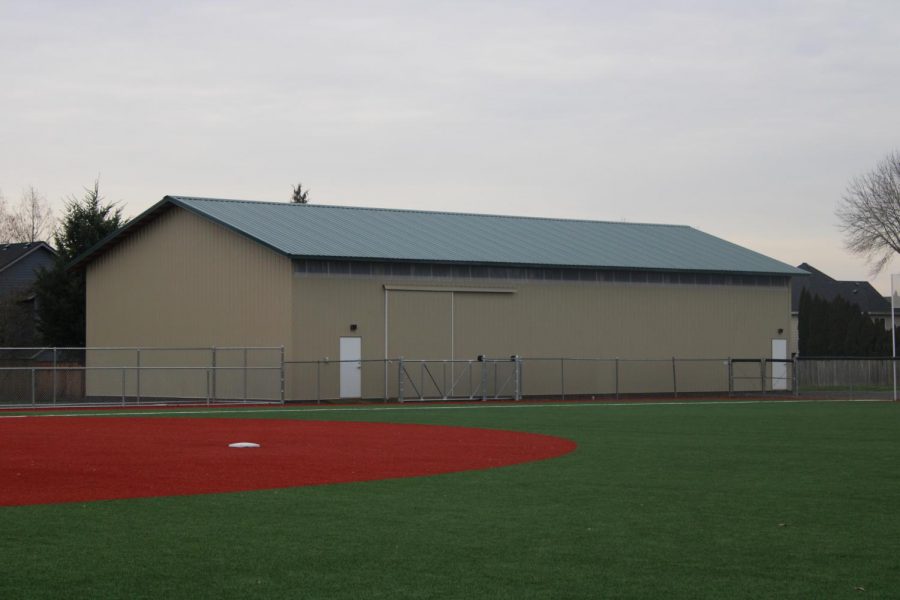 The new softball field and hitting barn, being finished now make a prominent impact on the upcoming softball season.

By the time the season starts, the softball team will have a brand new facility–turf field, batting barn and locker rooms. Superintendent Ernie Brown set aside money in the field improvements from the building bond to make sure that the girls would have facilities comparable to the boys baseball team after hearing complaints about equity from the players. Title IX is a federal civil rights law that states no person in the United States shall, on the basis of sex, be excluded from participation in, be denied the benefits of, or be subjected to discrimination under any education program or activity receiving federal financial assistance. With the addition of the new facilities, the school should be Title IX compliant.

“I believe it is very beneficial to the kids and our community,” softball coach Pete Kostel said. “It gives our kids a fair shot, just like any kid in the school.” The facility was funded as part of Measure 34-248 the $291 million bond measure from the November 2016 ballot. Kostel explained that the district looked at having opportunities for baseball and softball, and since baseball had a turf field and softball did not, they decided to use the money there.

“The way I look at it, Title IX can be tricky; it’s a good thing, but it can be tricky in the sense that you can chase it a little bit,” Kostel said. As the head coach for softball Kostel appreciates that it gives the athletes the opportunity to practice when the weather is bad.

“It gives you more of a chance all year round to use the facility, and it helps out with maintenance and cost,” Kostel said.

“Now that our new barn is up, and we have a new hitting facility and locker room I think softball and baseball are equal,” sophomore Sera Reilly said. Reilly played on the varsity softball team last year. “I think the upgrades are amazing and super nice; the only thing I wish is that the barn had heat.”

“I thought [the softball and baseball facilities] were unequal before we got our upgrade because baseball had a turf field, a hitting cage, and a club house when we didn’t really have much and had to practice in the small gym when the weather was bad,” junior Sophia vanderSommen said. “Our field was very nice before our upgrade but the turf is so much nicer because we can still practice even if it’s raining, and we don’t have to deal with the tarp; that was a pain.”

VanderSommen has played on the varsity team the past two years.

“Having the turf has given us more opportunities to get better; it is extremely hard to go from practicing in a gym for three weeks straight into game time.”

VanderSommen believes that the two facilities are equal now that softball has a batting barn.

“We now have access to the same things as baseball did in the past,” vanderSommen explains. “In the past years we have never really had the chance to have winter workouts for softball, but now we can thanks to the new barn.”

She explained how the softball team has had lots of pre-practices already and that it is much nicer than hitting under the stadium where the old softball batting cages were located. “I’m also super excited to see how the locker room will turn out.”

“I think it’s more than equal at this point,” sophomore Owen Kosmala said. Kosmala played on the JV II baseball team last year. “I think they’ve more than surpassed their equal due.” He does believe the softball players deserved the upgrade but doesn’t expect a new baseball facility due to the probability of the baseball and softball facilities going into a back and forth upgrade battle. Kosmala says if the baseball team were to get a new facility, they should receive a new batting cage.

“If you look what they did, they have a new batting cage that is actually larger than baseball’s; their facility is probably unequal now because it’s swung towards the girl’s side,” athletic director Alan Boschma said. “All of our other new facilities are done so they are equal.”

“Overall, the new facility for softball is amazing and will help us step up our game in many ways,” vanderSommen said.