From beginning to end, the swim team makes waves 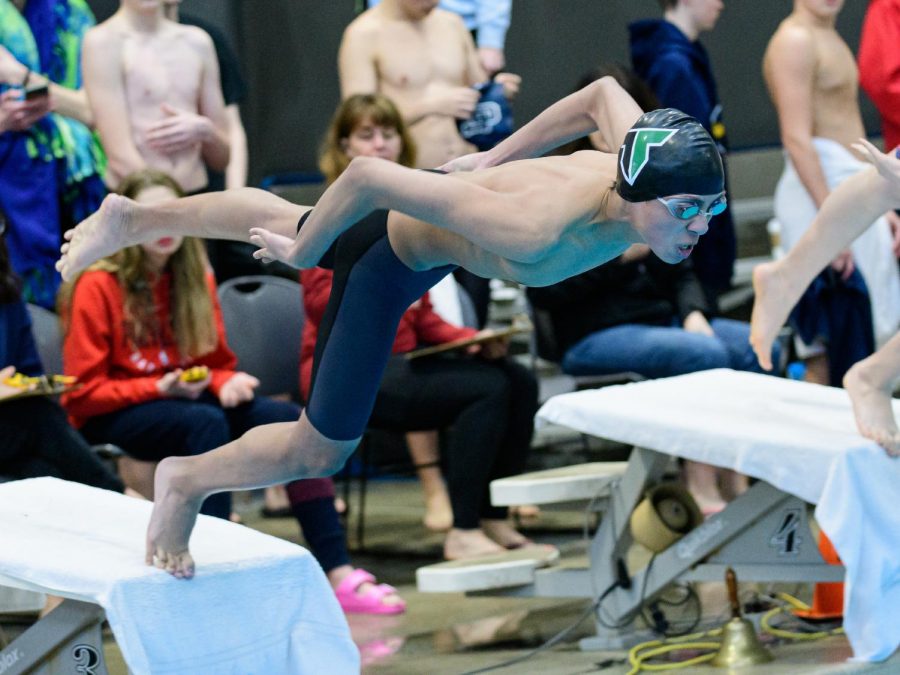 Junior Jaden Nguyen dives into his 100 breast. Nguyen qualified for the 6A state swim tournament for the 2019-2020 school year.

By Noah Vu and Abbi Elliott

Last week swimmers competed in varsity districts at the Mt. Hood Community College pool Swimmers who placed 12th or better in their event in Prelims on Friday qualified for Finals which took place the following day. In order to make it to the state meet, swimmers had to either place 1st or 2nd in finals or swim the qualifying time for the specific event.

“Overall this season I’ve seen lots of growth in our team and I’m excited to see how they keep growing and progressing to become strong competitors at districts,” coach Eli Maher said.

“It’s fun seeing these guys that have never swam before swim really good and be competitive with swimmers who swam their whole life,” coach John Ruzicka stated.

Tigard’s swim team officially kicked off the season with their first practice on Nov. 25. Practices are held after school from 3:30 to 5:00 p.m. every day. Swim meets are usually held on Thursdays.

Tigard had their first meet of the season on Dec. 12 against Lakeridge. The Tigers were unable to pull out a win at their home pool. The girls had lost with 80 points while the boys lost with 49 points.

“It was so fun,” sophomore Lola Fulkerson said about the meet. “We lost the first meet of the year, but I think we all learned so much; and I kept my goggles on for the first time.”

Over the next week of training, the team prepared themselves for the next meet which took place at the Canby Aquatic Center against Canby. The Tigers lost again with the girls losing with 64 points and the boys losing with 66 points.

“The Canby meet was super fun and because of the smaller team numbers for both teams we worked efficiently and we all performed well in a non-stressful environment,” senior Noah Reitmeier said. “It wasn’t hectic like some meets.”

However, the Tigers did not let the loss get to them. Over winter break they began winter training which included two practices every day. John Ruzicka, Eli Maher, and Tristan Larson, Tigard’s swim coaches, pushed their swimmers to improve with intricate practices.

“During winter training the team had two practices a day which allows us coaches to incorporate a lot of different types of training that we don’t normally have time to do,” Maher explained.

With the conclusion of winter break and winter training, the team prepared for their first meet back, against Oregon City. Unlike other pools which are usually 25 yards, Oregon City’s pool was 25 meters. This would affect their times negatively because Oregon City’s pool is slightly bigger than most. Even though swimmers may have added times in their events, they were still able to work together as a team and achieve good results.

After the meet was over the swimmers headed to Mike’s Drive-In and grabbed burgers to eat on the bus for a fundraiser that helped the Oregon City team. While eating on the bus, everybody waited in anticipation for Ruzicka to announce who won the meet. He read aloud that the girls lost by 4 points and the boys won by 2 points.

“The meet was awesome,” junior Nathaniel Whitehead said. “The energy was high and we were all really excited to be there; we swam well.”

“I think the season has been going a lot better than I predicted at the start of the year,” Ruzicka said. “We have a lot of new faces and a lot of these new freshmen have pretty good talent.” Ruzicka is also proud to see how the new freshmen are stepping up and sticking with the swim team without complaining when the work gets tough.

Spectators found the meets quite exciting.

“It was my first time ever going to a swim meet,” junior Alex Hernandez said. “I thought it was exciting and different and I would attend another one in the future.”

At their last home meet, the Tigers celebrated their seniors. The team continued their tradition of getting tropical in preparation. This consisted of wearing tropical clothing to school and decorating the pool with posters for the seniors and a “T” made out of pictures.

The team swam against Lake Oswego and came out with a win by 11 for the girls and a loss by 64 for the guys.

After the conclusion of the meet, spectators were welcomed to pack the pool as a fun and memorable experience. Following this there was a belly flop competition open to all those who wanted to participate. The winner this year was senior Justin Thomas and he received a shirt as his prize.

“It was exciting and fun to watch,” sophomore Cadence Neal shared after senior night had concluded.

“I’m happy that all the seniors are leaving because that means that they are graduating and moving on to bigger and better things,” Ruzicka said.

The team continued to train and prepare themselves for the start of districts.

JV swimmers were sent to the Lake Oswego pool for their district meet on Thursday, Feb. 13.

“JV districts was a really fun way to end the season and I had a lot of fun with the gal pals.” senior Katelyn Wilhoit said. “My favorite part was playing music on the bus ride back.”