Digging the pink and burying cancer 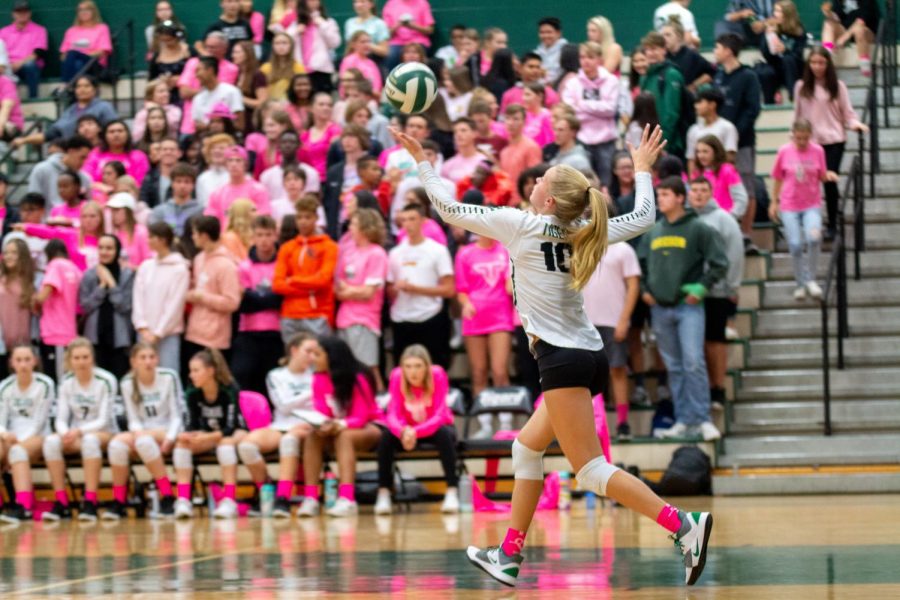 Sophomore volleyball player Kaitlynn Peterson serves the ball during the Dig Pink game against Lakeridge. The team only won one set, but they raised $859 for breast cancer.

By Ashley White and Delena Do

Although October, also known as “Breast Cancer Awareness Month,” has come and gone, the Dig Pink volleyball event provided an example of how students can come together to support a Tigard sports team and raise money for a cause at the same time.

Business teacher Sue Suttich explained that Dig Pink uses the volleyball organization started by a coach whose mom had breast cancer, and the volleyball teams raise money to send to the Side-Out Foundation which researches breast cancer. According to the Dig Pink website, “Side-Out’s Dig Pink Movement and its nearly 100,000 student-athlete participants have raised over one million dollars per year […] This provides more quality time for those living with stage IV breast cancer.”=

According to volleyball coach Jesse Abell, the volleyball players got their pink gear ahead of time and were hyped up for the game. “In terms of the actual game itself […] we didn’t end up winning that game,” Abell said. “But I think it is really helpful to the team to have a rowdy crowd there.”

Suttich and her sports marketing class were in charge of promoting the volleyball game for the third year in a row. Sophomore Cadence Neal was part of the sports marketing team this year and worked hard to spread the word of Dig Pink. “In Sports Marketing we have done all the posters around the school, in the classroom, and on the walls to promote the event,” Neal said.

Along with creating posters, the sports marketing team was also in charge of the items being sold at the game such as food and treats. Students were encouraged to support the Dig Pink movement by wearing pink at the game. To recognize those who are fighting breast cancer, a variety of items were sold at the game including treats and t-shirts. In addition, pink roses were passed out to honor those who have previously dealt with or are currently dealing with breast cancer.

Suttich’s sports marketing class worked hard in order to reach their goal of having 200 students at the game and sending $750 to the Side-Out Foundation since late September. In the end, they had a turnout of about 275 students and were able to gather $859, beating their goals by $109 and around 75 students.

“The game was a huge success since there were way more people cheering and rooting for their teams so the atmosphere was really hyped,” sophomore Letin Huynh said.

Fans said that the game was still memorable despite Tigard only winning one set out of the four against Lakeridge.