The spring season starts this week 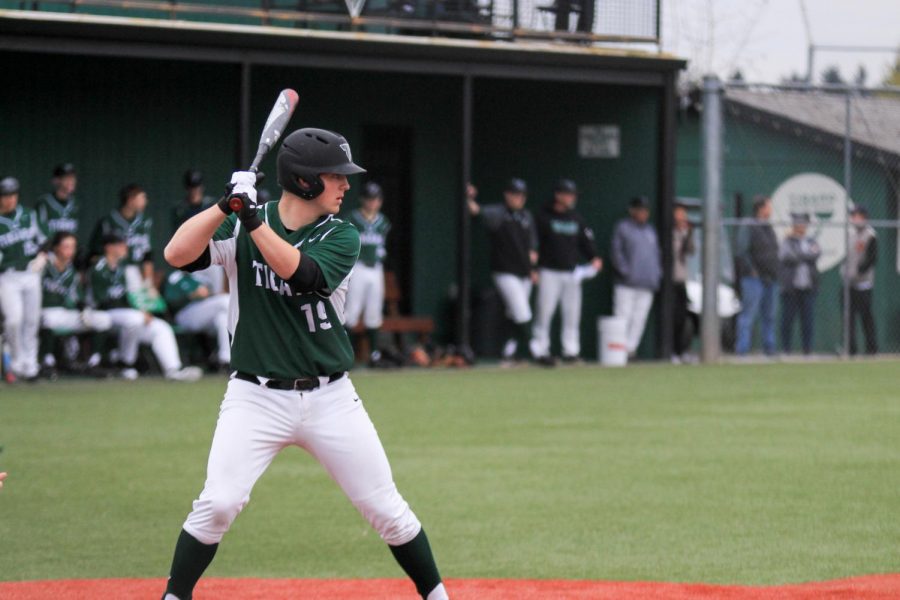 CJ Rivers is up to bat at a home game last season. Practices started Feb. 24 for this year's season.

The boys baseball team will touch bases on March 11 by starting off the season with a jamboree tournament hosted here at Tigard High. The soon-to-be-formed team looks full of potential this year according to head varsity coach Tom Campbell.

Tryouts will be held Feb. 25 through March 1. Campbell is looking for committed, hard-working, and coachable players, and so far he believes he’s seen many students capable of playing at the college level. Roughly 15 to 18 players are expected to make the cut.

Optional open field days have been held in the past couple of weeks on Saturdays, coaches have “[…]worked on fundamentals and evaluated players in competitive scrimmages,” Campbell said.

Sophomore Josh Schleichardt, who plays third base explained that the coaches have already been helpful, preparing the boys the best they can for tryouts.

“I respect my coaches and know that they want the best for me as an athlete,” he said.

Senior first base and pitcher, Clinton Burke Rivers Jr., has been preparing for the upcoming season by training and working out.

“I’ve done a lot of physical stuff like hitting in the cages, lifting, taking ground balls, but I’ve done a lot to prepare mentally…most of this game is mental and mentality.”

Schleichardt additionally, looks forward to playing for Tigard.  “I’m most excited about getting a chance to play with a good group of guys and having fun with the sport I love,” he said.

Inexperienced players are also welcome.  Rivers, who is also a three time varsity athlete, has advice for newcomers.

The team faces tough opponents every year. Campbell believes all teams are decent, whereas, Schleichardt and Rivers both agree that West Linn will be a stand out opponent. Whatever the case, Campbell hopes to, “coach well, make the decisions right, and get a little luck,” in order to get the team to the state championships.

League games start the week after spring break, and playoffs begin the third week of March. Although he is quite confident that there won’t be any new players who will be contacting him, players can still email Coach Campbell at [email protected] for any additional questions.