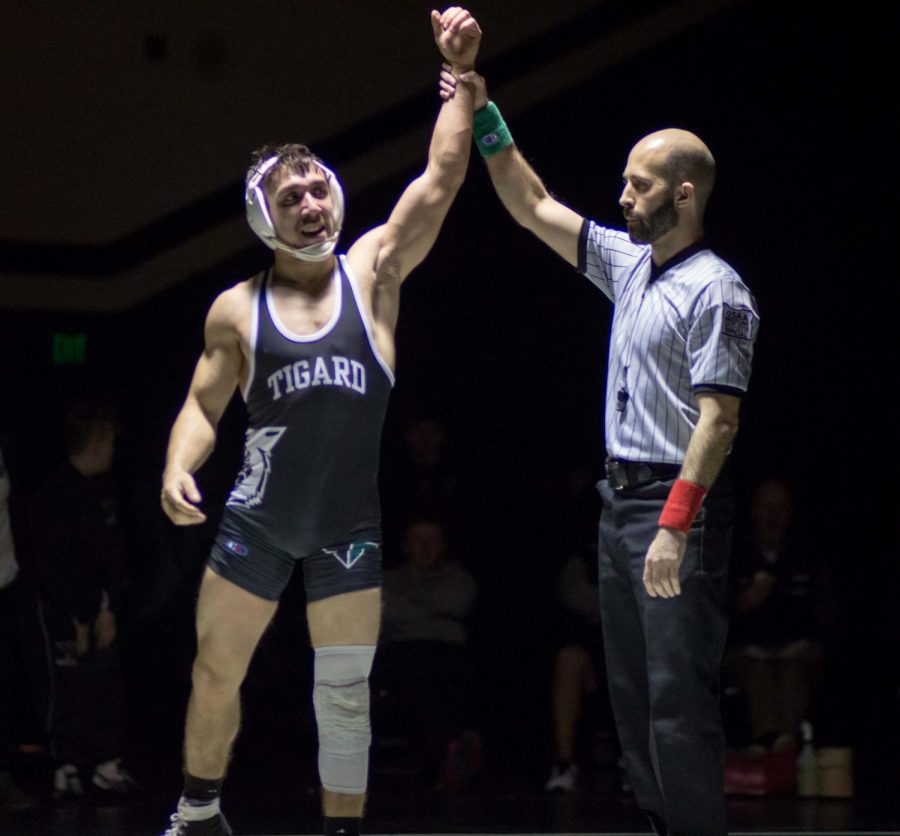 This week the wrestling team heads to Tualatin for the district meet.

This season started as a total of 54 students signed up for the sport, the most Coach Jarman has seen in a preseason. Among them two unique freshmen– Sharon Cousineau, who has already faced some controversy for being a female wrestler, and Kobe McClellan who experienced an injury during one of his matches.

Being the only girl in a house full of brothers has made her used to being the only girl in a situation, but freshman Sharon Cousineau doesn’t try any less. Cousineau has been wrestling for 9 years, but due to a back injury last year, she was unable to compete and had to go to physical therapy. She is the first female at Tigard to have previous experience in wrestling so,”her technique is really good,” Coach Jarman said.

Cousineau started wrestling because of her oldest brother, Andrew. “I remember always wanting to go watch his practices, I would beg my mom to allow me to go,” Cousineau said. “So when the next season came around, I told my mom I wanted to start the sport, she signed me up for it and ever since, I’ve loved wrestling.”

Wrestling has positively impacted Cousineau’s life both on and off the mat. Wrestling has taught her the importance of hard work, determination, good sportsmanship and how to work with a team. Cousineau has gotten the obvious support from friends, family, and her coaches, but she is mostly self-motivated. She wants to improve for herself and is determined to be the best that she can be.

Coach Jarman will push his team that’s full of potential, to their limits no matter if they are male or female. “We’re going to use heavy techniques…conditioning hard…getting them tough…the same blueprints of last year but more advanced,” Jarman said. However, the conditioning has to stop, at least for a time, when a wrestler gets injured.

He of course, won’t treat the athletes the same way as his students. “I’m less intense as a teacher, I’m a little louder than the rest of the coaches,” Jarman says. Jarman likes seeing his wrestlers winning their first titles so he really wants,”the team to be a top four team in the state so we should be able to bring a trophy home this year,” he said.

Freshman Kobe McClellan injured his collarbone, causing him to have to sit out a good part of the season. He had to try his hardest in order to get back on the mats. “It was the start of the second round of my second match and the kid took a shot on me and I tried to catch him and throw him but instead of throwing him I laid back, landed on my collarbone and he landed on me,” McClellan said.

All in all, the wrestling team as a whole, will compete and train harder than ever before, keeping in mind that injuries can very well happen. The team already has the motivation to attain the trophy, they just have to practice.