Ducks or Beavers: who will win the day? 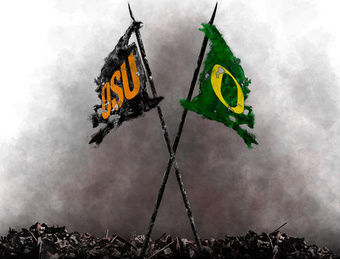 Who will win the big Civil War game, the Ducks or the Beavers? The annual rivalry game will be on Friday Nov. 29 at 4 p.m. at Autzen Stadium.

Oregon State being 6-3 and losing 31-14 vs USC on Nov.1 is currently ranked 3rd in the Northern Division. The Ducks, on the other hand, are 8 -0 and ranked 1st, with their amazing victory over UCLA on Oct. 26.

Both rival teams have key players that help lead the team. Oregon State has Sean Mannion as their quarterback, a key role on the field. And, Oregon has well-rounded players such as De’Anthony Thomas.

So who at Tigard High School are Duck fans and who are rooting for the Beavers?

Senior Mitchell Lebrun said, “I think that a majority of the Duck players are good and work well as a team. Thomas Tyner is a great addition to the team this year.”

Unlike Lebrun, some students do not have a preference. For instance, senior Melissa Keenan states, “the Beavers are doing pretty well, but the Ducks are doing amazing, but less than expected. It will sure be an interesting Civil War game.”

There are some faithful Beaver fans, though, who hope for the best of the unpredictable team. Junior Emilee Heyden says, “the Ducks are good as usual, but could lose on any night. I hope the Beavers turn it around by the time of the Civil War and bring their intensity to the field.”

Will the Ducks keep up their intensity and winning streak on Nov. 29 or will the hopeful Beavers win for the first time since 2007?