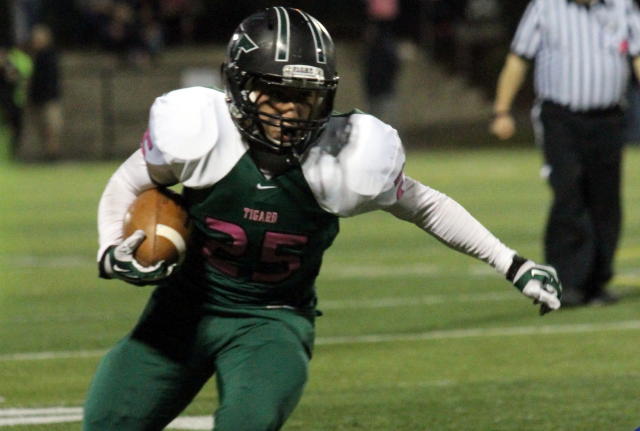 Homecoming is a sacred tradition that has been around since the 1900’s but this years homecoming game was extra special. For the first time ever, Tigard had their pink out game to spread breast cancer awareness on the night of homecoming. On top of that, the Tigard Tigers played against the Newberg Tigers in the battle of the two Tigers. And although Tigard is ranked first in the Pacific Conference, Newberg is ranked third and could easily be considered one of their stronger opponents in the division. Unfortunately for Newberg, Tigard showed all their strengths and similarly to past week outscored the other team 63-21.

“Our strengths tonight was playing fast and playing as a team like we normally do,” said senior Ryan Cleveland.

Although it was homecoming, the actual playing didn’t differ much from the last seven weeks. Tigard made touchdown after touchdown with star players such as seniors Manu Rasmussen, Daren Rodrigues, Jett Even, and Nick Duron making the best of their time on the field. During the first quarter, Duron got the honor of scoring the first touchdown of the night with a nine yard pass from Even. By halftime, Tigard led Newberg 28-7.

“We didn’t have many weakness tonight, we’re a strong team,” said Duron. “Newberg couldn’t run on us and we stopped them pretty well.”

In the third quarter Rasmussen, who has been recently been offered a full ride to Eastern Washington to play football, proved that he was worthy of being a D1 athlete. Rasmussen scored twice in the second quarter but going into the second half he showed off an impressive 38 yard run, followed by another 39 yard run. Senior Joe Lobatto and Justin Alvarizares also assisted their team in obtaining their win, and as always, junior Brady McGetrick continued to deliver consistent and accurate kicks. The Tigard Tigers scored a total of 35 points in the second half and Newberg scored twice. Tigard remains undefeated, ending the night with a  final score of 63-21.

“I think we all did good tonight”, said Rasmussen, “our line blocked good and we have the number one defense in the state. It feels good to be undefeated, it’s expected though.”