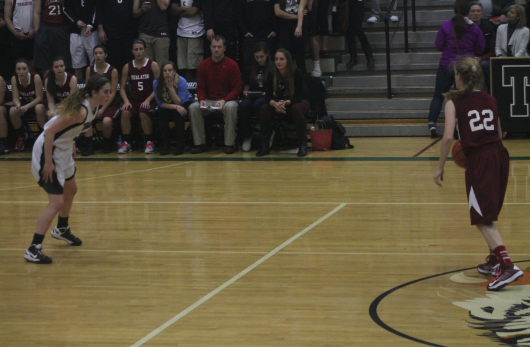 The girls varsity basketball team is now well into their playoff games, with a 21-3 game ratio, it seems like they would have most of the high school attending every game cheering them on, but there is a lack of support and it’s noticeable.

”I think THS has done very little to support girls basketball this season,” said senior Megan Risinger. “It’s hard to get pumped up for a game when there are only the few fans at the game. Most of them being friends with the players, it was disheartening to find out that most of our school didn’t know we were 6th in the state or undefeated in league,” she added.

The student body really needs more motivation to support their home team, who have worked hard to get themselves in their current position.

“It would be great if we could get some more support. We are a successful team and every game could be fun like ‘Battle of the Beasts’! If people would just come and watch!” Said Junior Lexi Carter.

Varsity girls definitely have taken note of the insufficient support from their fellow student body members. Tigard students are even being noted as not being supportive enough.

“I think the student body should come to the high school basketball games instead of rec, this includes going to the boys games too. Rec games should be changed from Friday to like Thursday or Saturday,” said senior Julia Santos.

“The sports teams should support each other [sport teams] by going to each other’s games. We all know what it is like to practice every day and give 100% to bring pride to our school. Every sport works hard and deserves to have people cheer them on,” said Risinger.