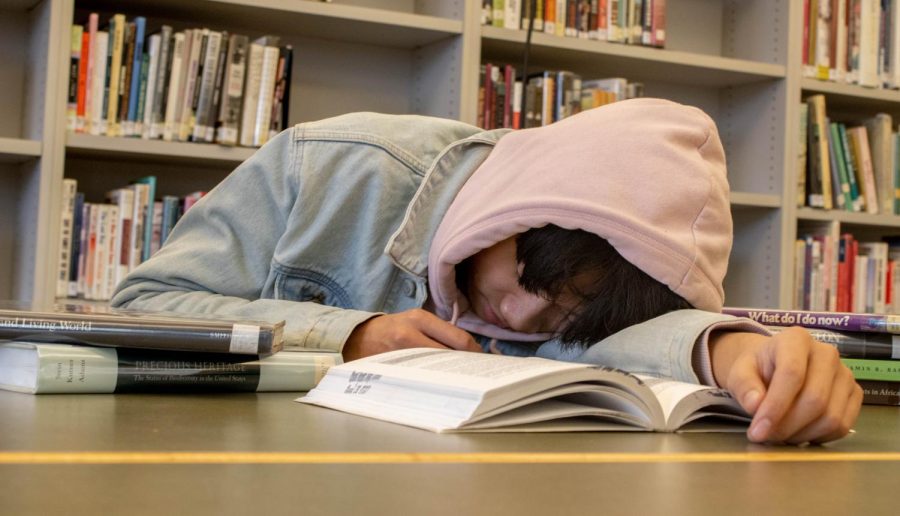 Student taking a nap in between their study sessions. Many students feel the need to catch up on sleep during the day due to late nights of studying.

Teenagers are recommended eight to 10 hours of sleep per night in order to healthily function in the day. However, many students do not reach this requirement due to various reasons. Sleep acts as food for the brain and allows the body and mind to recover from the activities done on a daily basis that take up energy. Some choose to take naps in the day to catch up on lost sleep. The big question—are naps effective or a waste of time?

The importance of getting a good night’s rest is well-known, yet many students are unable to achieve a “beauty sleep” every night. Most students are unfortunately paying the price for staying up late the next morning at school, where many find themselves with a heavy head and an unusually lethargic personality. To accommodate for their lack of sleep, students will take naps after school. Could this be the reason for their lack of nighttime sleep in the first place?

“I nap because school puts a lot of stress on me and I have four hours of homework every night,” sophomore Alyssa Moore said.

In countries like China, nap time is built into the school system in order to help reduce stress and allow students to better focus on their work. Recently, researchers from the University of Delaware conducted a series of tests on China’s school system and their students. They have concluded that teenagers who have a habit of taking naps are able to focus for a longer period, have a better memory, and even get a better night of sleep.

Workers are also given a chance to nap in China since it is built into the system. Does the U.S. give Americans the same benefits?

Unfortunately not; however, some teachers have found their own way around this obstacle.

Chemistry teacher Rob Massey has been teaching at Tigard High for over 30 years and has seen all of the building’s major changes. “Back in the old days, there used to be a teacher lounge where teachers went to smoke and teachers napped there all the time,” Massey said.

Although napping is considered a healthy habit in China, it is still a controversial topic in the United States. The problem that often arises when it comes to napping is oversleeping. It is recommended that a person should nap for only 30 to 60 minutes at a time, but in a recent survey of 17 Tigard High Students, only two said their naps usually last around the recommended range, while some nap for as long as five hours.

“I oversleep sometimes so then I don’t have enough time to complete my homework,” sophomore Briana Tran said.

This is commonly known by students as a “power nap,” in which they take an extremely long nap—which could last anywhere from three to six hours—before staying up all night in order to work on homework or study. This in turn affects their sleeping schedule, and results in a serious loss of sleep. Taking “power naps” is in fact more harmful than it is beneficial. 60 percent of the 17 surveyed claimed that napping makes them more grumpy, while the rest of the students said they feel either normal, grumpy, or energized.

Despite this, the U.S. has tried to accommodate for students’ sleep debt by pushing back the time school starts and including a longer lunch time. California’s government recently signed a law for schools to start later, effective this year.

The pros and cons of nap time are closely aligned, which is what makes the benefits of napping so controversial. However, napping can be an effective tool as long as it is not abused.