From Lofi to Drake- Music tastes around Tigard are widespread

What are the students of Tigard listening throughout the school day? Noah Vu takes a look. 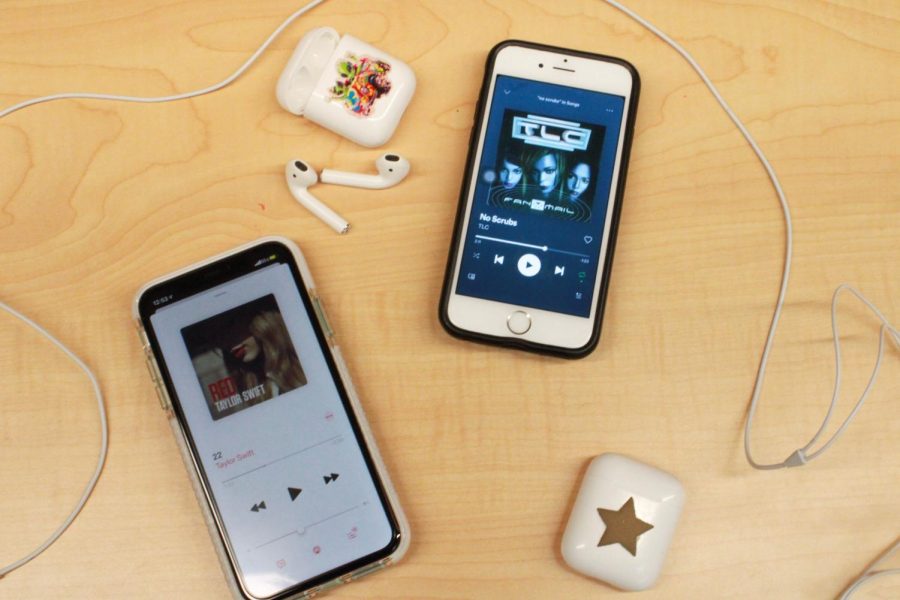 Two popular songs, as said by two Tigard students. Some favorite music genres are rap, pop, and so forth.

Music plays a big role in many people’s lives; it has the power to influence someone’s mood, create communities, and form friendships. I decided to go interview some of my peers to get an understanding of the different music tastes around the Tigard community and compare it to my own.

“Music is always there, so if you’re bored […] you can just listen to music,” sophomore Elizabeth Ciula said. “I’ve made a lot of new friends because of having similar music taste.” Ciula says that she met all of her best friends in choir and getting to sing with them keeps them close.

There are many different styles of music, from pop and rock to country, classical, and hip hop. Here at Tigard—like many other communities—the music students listen is very diverse from one student to another.

Music is everywhere and is used in many different ways. For example, many people in the gym will listen to more upbeat music to energize themselves to get through their workouts.

“When I go to the gym I listen to rap music because it mentally prepares me for lifting,” junior Brandon Kohlman explains.

I agree with Kohlman. When I listen to music while working out, I also personally listen to rap/hip-hop music. Rap music boosts my energy and spirit, which can help me lift more weights for longer periods of time.

“I like Taylor Swift all the way because she has really good lyrics and good music in general,” sophomore Leah Johnson said. Johnson enjoys Taylor Swift because she makes her feel hyped up and sometimes chill in which depends on the song.

I don’t typically listen to Taylor Swift, but a few of my favorites are more of her older songs like: “You Belong With Me”, “22”, “We Are Never Ever Getting Back Together”, and “I Knew You Were Trouble”.

“I like lofi because it’s the only type of music that’s ever made me feel something,” junior Zyrus Zaragoza said. “It’s really vibey music and really connects me to my emotions.” Zaragoza explained that “lofi” stands for “low fidelity”, which consists of slow hip hop and instrumentals.

Last year I used to listen to a lot of lofi and sometimes still do. When I listen to lofi, it’s usually during homework or whenever I’m in a more chill mood-for example, on a long car ride or even when I’m going to sleep. One of my favorites is “WALLS” by Slushii.

“I like ’90s music because they’re classics and they don’t fade with time, ” junior Nicole Salazar said. Salazer says that it’s fun to listen to ’90s music and get a glimpse of what the world was like before she was born.

Although I used to listen to it a lot last year, listening to 90’s music is a rare occasion for me as of lately. Some of my favorites from the 90s are “No Diggity”, “No Scrubs”,”California Love” and “Torn”.

Music is great in setting someone’s mood. For example, in a coffee shop where people come to do work, more chill music is often played to help them focus. It even has the potential to influence how well a night with friends went.

“Music can help put me in a better mood and help make fun memories with friends,” junior Amber Guild said. Guild described that when she listens to music while driving with her friends it’s always fun, because they all have similar music tastes.When hanging out with friends, I enjoy listening to popular music that everyone in the group can relate to so that everyone can enjoy the songs.

Without music, many would have trouble connecting to their emotions and would have a lack of entertainment. Songs have the ability to bring about people’s feelings and finds its way into people’s lives every day.