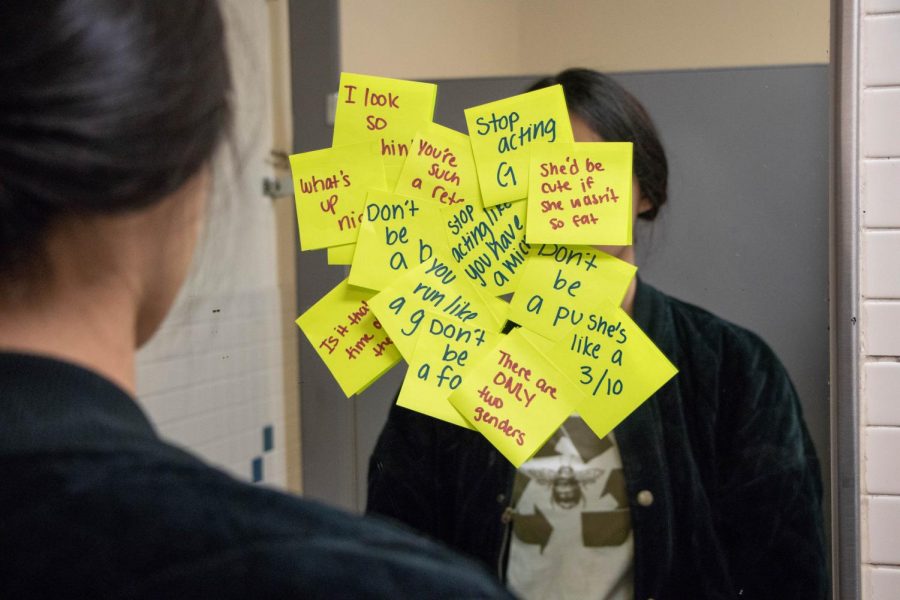 Hate speech is found and spoken all over Tigard High.

By Maddie Cooke and Jalane Hailu

Derogatory language can be commonly heard in the halls and bathrooms of Tigard High. From racial slurs to ableist commentaries, hateful language is casually spoken every day by Tigard students and is overheard by peers as they pass by on their way to class. Although this language is often spoken in jest, that doesn’t mean it’s okay.

These words can disenfranchise classmates, and sensitivity is not always present here at Tigard. Maybe it’s a lack of education about the connotations of some words. Some students challenge their offended peers and ask: Why is this a big deal? I was just joking around. Although it may not physically hurt someone to say certain words, it is dismissive at best and emotionally hurtful at worst.

Many of these words and phrases circulate in and outside of the community, all of which reinforce a cycle of oppressive behavior. The passive acceptance of these words at Tigard is the root of the problem.

Having a black friend does not give anyone the permission of saying the N-word, nor does a lyric or slang term. Saying the R-word is not appropriate to use when describing a person’s intellectual capacity.

Let’s face it, who cares if it is 2019? Why should the year describe the progress that needs to be in place? Human decency should be present at all times, regardless of the representation in Congress or the technological achievement at the time.

It is not hard to be an empathetic and respectful person.

Tigard has a diverse community, and it is completely unacceptable that people continue to say these words in our building. Expand and explore your vocabulary. It is our responsibility to be conscious and considerate, for not only our behavior but also word choice.

One example of a word that we should eliminate from our vocabulary is the N-word.

At the Hangout Festival in Alabama on May 21 2018. Kendrick Lamar, one of the most influential rappers of the 21st century, was performing M.A.A.D City and invited a white woman to rap part of his song on stage.

After repeating the N-word several times, the crowd and Lamar booed her for saying those parts of the lyrics. He then asked her to stop saying the N-word, telling her “you gotta bleep one single word.”

Even after the warning, she continued to say the N-word, ultimately getting herself kicked off stage and becoming ‘cyber-hunted’ on the internet. Despite the backlash, many media outlets and fans supported the girl and questioned Lamar’s logic. Why would you put the N-word in your song if you didn’t want people to say it? Other people questioned why she didn’t stop, while many argued that she was simply performing lyrics of a song. Although her actions became excused, the controversy lying with the permission to use and say the N-word lingered.

The N-word came into this country as a derogatory term used to dehumanize enslaved Africans. The word has been reclaimed into ‘Nigga’ by the black community in order to deconstruct and remember the oppression black people face in a historically anti-black society.

This is known as reclaiming, or the process of repurposing a word to empower a suppressed group. If the word were to be completely disappear, it would erase parts of black identity. When a non-black person uses the word, it results back to the oppressive nature of the word. When anyone who is not black uses the N-word, it deepens the oppressive nature. It is not hypocritical for black people to use it, but it is still inappropriate for a school setting. In other words, absolutely no one in the school halls should be using this word, period.

There are many consequences that follow the behavior of using these inappropriate terms and phrases. Nowadays, anyone can record and upload racist or homophobic slurs that people say. The end result however, is the continual hurt and detrimental impact on the communities these are said against.

There lies no community with people that choose to use offensive language and actions towards others. Although we pride ourselves for being a connected community, we are no more than a mere group of people pushing through a building focused on our own journeys. As individuals we need to think before we speak. Our words have an effect on our community. No place for hate.