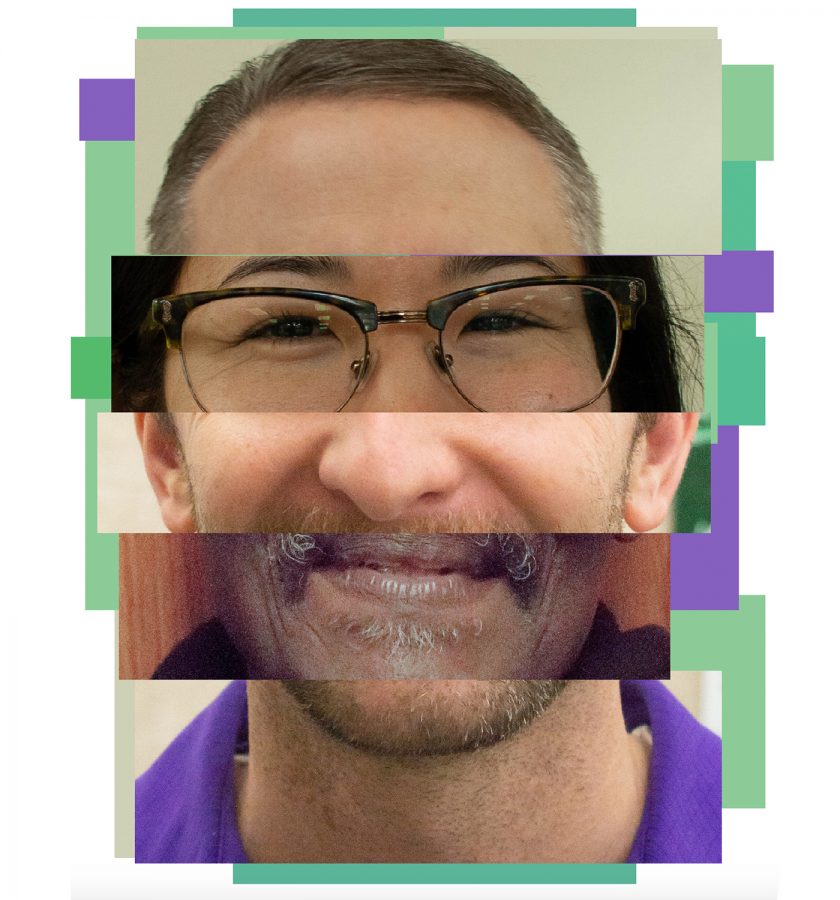 Meet the Faculty Monster. Scary, right? That's how we feel when we look at the demographic of Tigard High's staff. Yikes...

By Maddie Cooke and Jalane Hailu

Mixed cultures, beliefs and identities permeate Tigard High, primarily creating a small and safe bubble of inclusivity for many students. While the student body may have a diverse look, the predominately white staff does not. It is important for administration to push for progress on this issue.

After conducting an anonymous Paw survey involving 304 students and staff members, many defined staff diversity as “a staff with different perspectives and backgrounds (ethnic, gender, political, sexuality etc).” Following this definition, 44.6 percent reported that they disagree with diversity in the staff properly representing the diversity of the student body.

The information for these pie charts were taken from an anonymous survey that 304 staff members and students participated in.
Although the students outnumber staff by 21:1, many reported that the most significant lack of representation followed with the ethnic and LGBTQ+ visibility. According to a student who identified as white, she does not feel comfortable sharing her sexuality.

“I’m a white female, so I’ve had a lot of privilege handed to me regarding representation. However, as a part of the LGBT+ community, I do not feel always welcome and that’s why I stay private about it,” she said.

Out of the 175 staff members there are 117 licensed-classified educators. From that there are only 7 teachers that are people of color. Many have mixed opinions about the disparagement of representation for a large but mainly overlooked Latino population. According to a white student, she believes the qualifications of an applicant should rise above their race.

“There are a lot of white faculty members, but the population is also mainly white in this area. I’d say mainly the only problem is there isn’t a lot of hispanic faculty members but I don’t think that is the schools fault,” she said. “I think the school would hire anyone to expand upon its diversity but it is all a matter of who applies and what they’re qualifications are. Their race should not factor in. It should be simply about what their resume says and how their phone screen goes.”

In contrary, a Hispanic-Arabic student feels that she would feel more represented with someone who looks like her.

“I’ve never in my four years of THS have come across a staff member that even slightly represents where I come from,” she said. “I’d feel more represented and like I can relate to someone in our school if I did have one.”

According to the Learning Policy Institute, teachers of color improve the performance in reading and math test scores for students of color. The students graduation rates are also higher and they are more likely to attend college.

Some argue that the clubs and equity council are more important when it comes to making the school inclusive. Clubs like YALA (Young Asian Leaders of America), BSU (Black Student Union) and MEChA (Movimiento Estudiantil Chicano de Aztlán) are prominent examples of students connecting with other culturally diverse students in the Tigard community. A Hispanic student shares her experience with balancing the lack of representation with joining MEChA.

“I feel that there is not many Hispanic staff members here at Tigard. There are times where I find it hard to relate in situations,” she said. “MEChA represents my culture here at Tigard. I think clubs led by students give opportunities for students to be represented in a way that will make them feel comfortable.”

An Asian student shared their insight from participating in YALA, which makes them more included.

Although we should strive to make our school feel more inclusive, we need to make an effort to have people in positions of power that represent the overall people they are educating. An African-American student stated that he feels clubs are not always enough to make a school feel inclusive.

“Other than the BSU there hasn’t been anything that has evaluated the meaning or feeling of being black,” he said. “The clubs are nice but the school does nothing on their own to show that you ‘belong’.”

Some individuals question the need for having a diverse community at Tigard High. A Caucasian student feels like society strives for more diversity in an unnatural and forced way.

“I feel there’s a constant push from everyone to be heard about the problems of their community, it becomes more argumentative and aggressive of an approach than helpful,” she said. “I feel there’s plenty diversity at Tigard but I don’t think it’s that big a deal to push for.”

A Caucasian student has strong beliefs on diversity as a whole.

“I don’t care about diversity,” he said. “I feel that diversity just causes problems and division between people and will eventually get out of hand.” 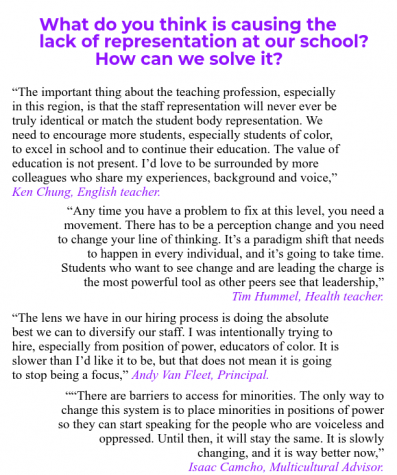 It is easy to not value diversity when you have the privilege of being represented. Although it may seem forced, it is an essential step towards progression in our community. Changing the status quo can be uncomfortable, but it helps minorities have more visibility in a culture that doesn’t support them. According to a white teacher, there are systemic issues that play a part in the problem of diversifying our staff.

“White privilege (and male privilege/cis-privilege/class privilege etc.) runs deep, and those norms run deep, and we have work to do,” she said. “I think we absolutely need to continue to push for more diversity, but we also need all teachers to be teaching anti-racism and anti-sexism. We shouldn’t put that responsibility solely on teachers of color or LGBTQ teachers (etc).”

Although progress is slow and at an uncontrollable rate, we need to recognize how important and impactful staff diversity is for us and our peers. For those staff members that represent the minorities in our community, we are grateful for their presence and commitment to education.

The perseverance to continue this journey of diversifying Tigard’s staff is strengthened through respecting our classmates and keeping an open mind to the concept of diversity. We need to continue this conversation for the people who should be heard. Only then can everyone stand together.