Advice and Opinions about 2016 Presidential Election 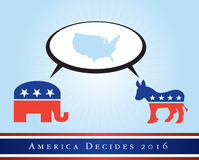 By Amanda Aman and Jaden Guerassio

We’ve all been hearing about the 2016 election, including all the candidates. Politicians, voters, and even non-voters are facing conflicts relating to this year’s election.

“Investigate and see what they stand for. Make sure to see what they’re all about before you make a decision,” Mr. Kitchen advised future voters.

Speaking of new voters, the seniors are ready to jump into the fray and exercise their democratic rights.  Right now, seniors have Donald Trump on their minds.

Senior Ashley Osburn had opinions about the candidate Donald Trump, who has all of us talking. “I think things would go downhill. I don’t agree with his statements about the immigrants. I think he is racist and very selfish,” Osburn said. It will be Osburn’s first election for which she can vote. “I’m very nervous, but excited at the same time. Although I’m not involved, I’m excited to see who gets elected,” she said.

“I don’t really pay attention to any other candidates but Donald Trump. I’m voting for Trump because he can’t be bought. He supports himself, said Cope.  Cope countered Osburn’s opinion of Trump explaining his focus was on what Trump could do for the economy from a business standpoint.

“Although he’s really selfish and a bit racist, I think our country needs someone with a “business” view at things,” said Cope.

Cope feels obligated and determined to vote for the first time.

“I’m definitely not scared to vote. I do think that it is important to contribute a vote although not everyone does,” said Cope.

The election will be something everyone will be looking in on more in the near future.