Freshmen and Sophomores fill the halls

Orientation brings students together in the building again 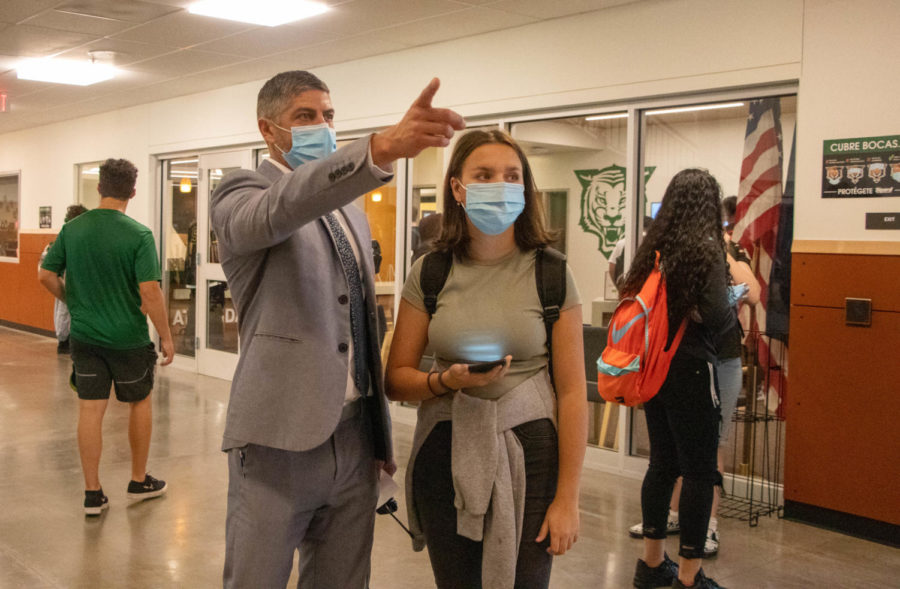 Vice Principal Tyler Davila shows students how to find their first period classroom during the freshman (and sophomore) orientation. Many students had not ever been in the building.

By Abbi Elliott, Editor in Chief

After 544 days since students experienced a “normal” day of school, freshmen and sophomores made their way through the high school doors for orientation on Sept. 8.

On Track Coordinator Cindy Pellicci was the head of the operation. Pellicci works to make sure students are on track to graduate by the end of freshman year, and as part of that push, she prepares the annual freshman orientation activities.

This year sophomores were invited, though not required, because many never stepped foot in the building during their freshman year.

Covid-19 protocols made planning orientation difficult this year. Link Crew members were unable to go through training in preparation, and large gatherings of students, like assemblies, were not allowed. Because of this, staff members had to step up.

English teachers ran building tours, math teachers took their students to the football stadium to learn cheers and the Tigard Fight Song, science teachers tackled locker practice, and history teachers helped by taking their classes to the library for Chromebook distribution. Students attended each of their eight class periods for 35 minutes.

Being in the new building for the first time, led to many students getting lost when trying to find their classes.

“It’s strange to be a sophomore who has never stepped foot in a high school before,” sophomore Molly Fast said. “I walked up and down the same staircase three times until I found my classroom.”

The completion of new construction, which happened during continuous distance learning, created an additional puzzle for students new to the building. Was room 205 in the rotunda? Or was it S205 or N205 in one of the new wings?

Meanwhile, some students had some anxieties and worries going into the long day.

“[It is] stressful because this is the most people I’ve seen since Spring 2020,” freshman Katarina Ilic explained.

What did she miss the least last year? “The crowds, especially people bumping into me,” Bynum said.

Other students were relieved when adventuring through the halls.

“It feels so good to be back in the school and to see so many people back together,” sophomore Mia Dahm said. “It feels normal again.”

Instead of the typical “welcome back” assembly, groups of students were taken to the football field to watch the Tigard cheer team perform.

“The Tigard cheer team was such an amazing addition to the day,” Pelicci said. “They were out trying to pump up their classmates in the hot sun from 9 until 3. What an inspiration.”

The day wouldn’t be complete without a few wise guys. “We were on the field and the cheerleaders asked if we could do better than the freshman and someone yelled out ‘no’,” sophomore Yaretzi Abarca shared.

Pellicci hoped orientation was not only about students finding their way around the building but also finding a new sense of community.

“Most people find solace and comfort in not being alone during stressful times and hopefully the way we ran orientation day provided that to our new students.”