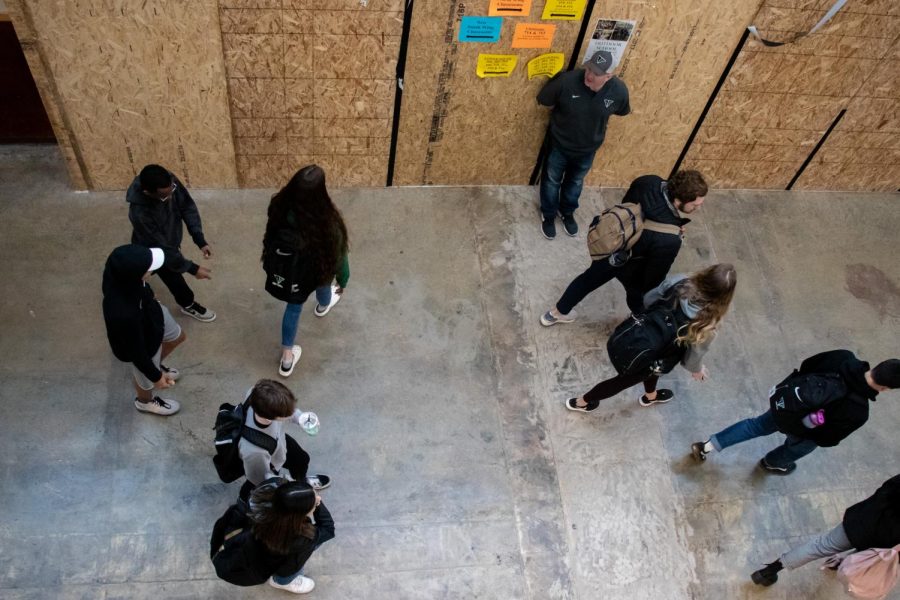 By Ashley Sample and James Favot

UPDATE: As of most recent update, Tigard High School will be closed until March 30 as part of a district-wide effort to prevent the spread of coronavirus.

Almost as soon as the first school bell of the day rang, Principal Brian Bailey announced over the intercom that Unity Day activities would have to be canceled by order of Governor Kate Brown.

Brown announced last night at 10:30 p.m. that new restrictions were placed on events held at school and that large events and assemblies would need to be minimized as much as possible. As of this article’s publication, the administration is still unclear how this new restriction will affect spring sports.

Tigard learning specialist Robert Parness says he was heartbroken by the sudden wrench that had been thrown in the works. “Unfortunately it was very last-minute,” Parness said. “We had to make the call because we can’t go against what the school district or the governor told us to do.”

“I want to give a shoutout to Mr. Bailey […] he ran to the auditorium and told the students who were going to speak at Voices personally because he didn’t want them to hear it first over the intercom,” Abell said.

“I’m heartbroken for the kids,” Parness said. “I’ve put in hundreds of hours in [Unity Day] personally so I haven’t even been able to process it yet because I’ve been so worried about our kids.” Leadership advisor Jesse Abell is equally disheartened by the cancellation of Unity Day.

“It is not an exaggeration to say that the students who have been planning this day have been up until two in the morning basically working nonstop on it,” Abell said. “It isn’t something that just came together magically, and I hope that it comes to pass that they get another opportunity to share their story.”

Senior Kavi Shrestha was one of the primary students in charge of planning Unity Day this year.

“Some of the stories they are sharing are very, very deeply personal and […] some of them were standing on stage five minutes out from giving their first speech when it was canceled,” Shrestha said. Despite the untimely deferral, he appreciates that Bailey made it clear that Unity Day will be held again in the future.

“That was very comforting,” Shrestha said. “Mr. Bailey’s been very supportive and helpful.”

The decision was met with controversy and mixed feelings over whether or not Brown’s decision to restrict school events was the best choice.

“It’s a very hard decision to make but I think it was the right decision for now,” junior Ethan Lamothe said. “We need to take every precaution and make sure that everyone is safe and […] everything will work out in the end.”

“I don’t think it was necessarily the best idea,” sophomore Andrew Boylan said. “I understand the parameter of not having many people close together but regardless, there is still a large amount of people within the school.”

“These are extreme circumstances that no one could have predicted or prepared for and we are just doing the best we can with what we’ve got,” Parness said. As hard as it is right now, I think it’s the right call to be as cautious as possible.”

In spite of these challenges, the staff and student body is dedicated to making Unity Day even better when the time comes that it can be held again. Abell acknowledges that several students had already skipped school today before the announcement, and he encourages as many students as possible to participate in the next Unity Day.

“I believe the only person that each of us can control is ourselves,” Abell said. “If people make the decision that they’re going to skip school, that’s not really anything that I [or] the students in my class can control.”

“I encourage everyone who was here today and the people who didn’t show up to come to Unity Day once we plan it again,” Shrestha said. “A lot of people have put a lot of time into this and there are a lot of misconceptions […] spread about the intent of Unity Day.”

“I know kids are just using it as a ditch day and that kids are spreading rumors about it because they don’t care to learn what it really is,” Parness said. “Some students feel uncomfortable about it but that’s okay because it needs to happen, and it will happen because it is important.”

“It’s a day to bring the community together,” Shrestha said. “Please give it a chance.”