The Freshman Wheel gets real

Tualatin gets a jump on Tigard in rolling out the program now called Career Exploration. 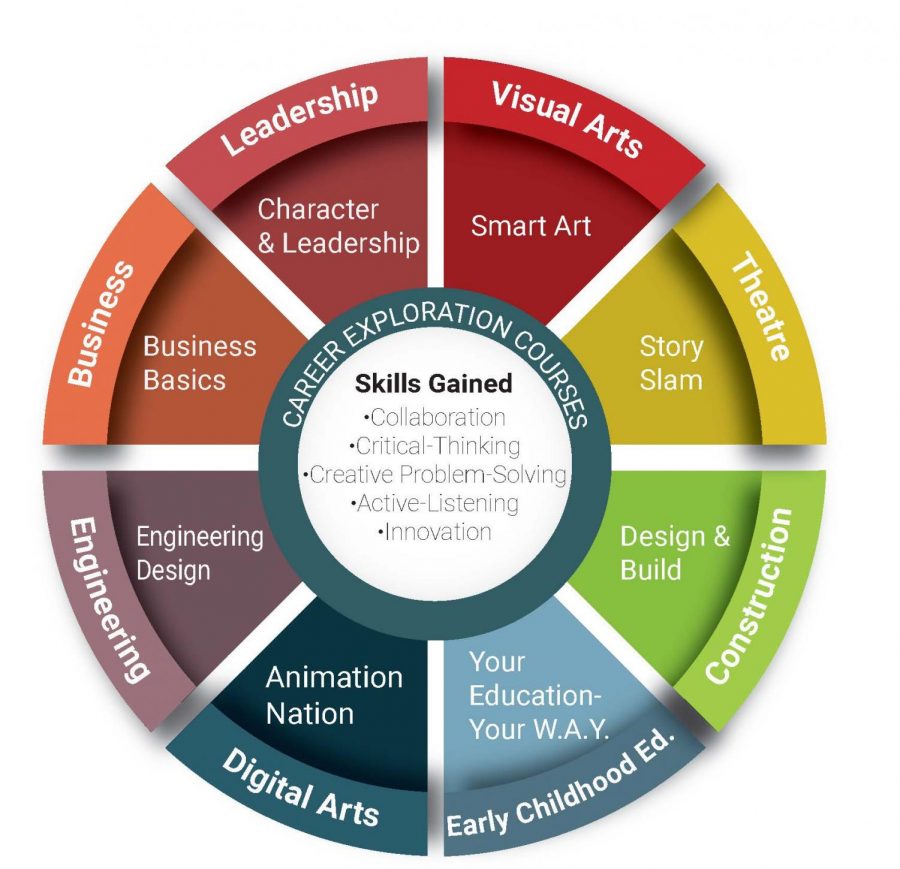 Tualatin High School rolled out The Freshman Wheel, now called Career Exploration, this fall, a year before Tigard High School. It included a change in the regular system of freshmen taking semester-long, elective courses. Instead, students were given the chance to take quarter credits, which is about 9 weeks long, through a rotation of different classes that are offered.

This change is to allow students to get a taste of many courses that they might not have considered taking on their own. The theory behind this exploration is for students to have a better sense of what subjects and careers interest them and even areas that they do not like before they get into the semester and yearlong classes later in their high school career.

As of right now, Tualatin High is running a trial run, and only half of the freshmen are enrolled in Career Exploration for each semester. However, next year both schools will include two, full, yearlong wheels to total eight classes.

Marji Ruzicka is an associate principal of Tualatin High. She has been in on the planning from the beginning.

“We know that students don’t always have a clear idea of what the classes are about, especially incoming freshmen, and this is one way we’re hoping to have students make more educated forecasting decisions, instead of potentially getting locked into a semester or even yearlong class that turns out not to be something he/she is interested in after all,” Ruzicka said.

According to the TTSD flyer on Career Exploration, the courses give students a better idea of what they are interested in the future whether it is for the rest of their remaining time in high school or beyond. In addition, this is a way for students to experience career paths without having to spend an enormous amount of money and extra time once they are in college or getting training for a career.

Along with freshman students, many teachers are also involved in Career Exploration, since it will eventually be an addition of 8 classes and 16 sections to the school schedule. Last spring teachers from both schools met up to discuss and plan courses that will benefit students. Some of freshman courses were proposed from existing programs of study, like theatre and digital arts. One was new.

Ruzicka is excited to announce that they are now offering classes in a construction pathway. After the reconstruction of both schools, there are more facilities and space for students to learn about designs and build concepts through construction classes.

College and Career Coordinator Michael Stead plans for all students to take all eight wheel courses instead of the four that current TuHS freshmen are taking.

“All of these classes are designed to be hands-on, real-world experiences, not textbook driven, and in fact, they don’t have any [textbooks] at all,” Stead said.

As the plans continue to roll out, teachers and administrators will work on addressing unforeseen issues that start to show up with the new program.

Olivia Bronson is currently a freshman at Tualatin High and is enrolled in her second wheel class of this year.

“The class I’m in is Character and Leadership, I wouldn’t have taken the class if it wasn’t for the wheel, but I’m glad I have it because I really like the class,” Bronson said.

Kent Pham, a freshman at Tualatin, agrees with this problem.

“I lose choices that I could’ve gotten credits for in other elective classes,” Pham said.

Pham feels limited to make a decision for himself at all because core classes are already enforced on him. After the limited choices of middle school, many students hoped to have greater freedom of choice in high school. Those who already know what they want to take in high school cannot get out of the wheel and are forced to take classes that they know will not suit them.

The school has taken this problem into mind and is considering ways that they can improve to make more students happy with the wheel.

“This year it’s new, we’re trying it, so I’m not going to say that every single student is absolutely in the wheel right now, but it is the main thing to plan to forecast for,” Stead said. “And then there is a tradeoff with this which is that it is in place of elective classes that you would generally have taken so we are aware of that so it’s a consideration.”

Since Tigard High is not currently enrolled in Career Exploration, the school has an extra year to to fix the bugs that might occur during the trial run at Tualatin and improve from it to ensure the best possible experiences for TTSD students.