Due to teacher cuts, veteran band teacher James Irving takes on a new role as the orchestra teacher this year 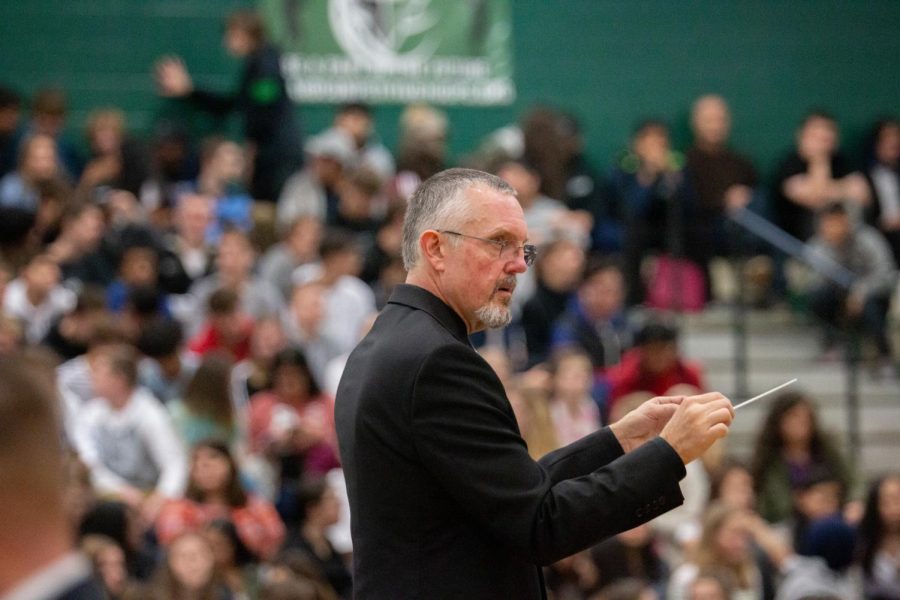 Band Director James Irving, shown here at the Nov. 7 Veterans Day Assembly, takes on a new role as orchestra teacher this year. Orchestra students and teacher have taken the change in stride this year.

At the orchestra’s final 2019 school year concert, orchestra teacher Anna Mersereau surprised her students by announcing that she would not be returning the following year. Her departure was due to district budget cuts.

“It’s a really difficult thing to do because it’s peoples’ lives that you are affecting, and so those are difficult decisions,” Associate Principal Angelita Miller said. “Last year our orchestra teacher taught only one class at our school, and because Mr. Irving is licensed to teach our music programs, that’s where we made the cut because that made sense to us that he would add another music class.”

Miller has been checking up on the students in the orchestra program and reported that they all seem happy with the change.

Irving has been teaching the band program at Tigard for 22 years. Before coming to Tigard he taught band in Washington and Idaho. While in high school and college, he played in orchestras as a percussionist and had also performed with several orchestras over the years.

“On one hand, music is music; the challenge that I had […] making this decision is that I don’t have the technical background [for teaching orchestra],” Irving said. “The biggest hegistation and the biggest challenge I’m having this year is that technical component.” He said there are a handful of students in his class who take private lessons and occasionally teach the other students certain techniques that he cannot.

“So far everybody’s been on board and I’ve got some great challenging music that we are working on,” Irving said. Many of the students in his class appreciate the more challenging music he has been having them play.

“He has really helped the orchestra improve and challenges us with harder music, which really helps benefit us,” sophomore Alyssa Moore said. “He understands music and explains it really well.” Moore explained how Irving teaches the program how to play as one by teaching them a section of the music at a time, which the past orchestra teacher hadn’t done.

“Irving knows the basics of strings and he is an experienced general music teacher and  is able to teach about the musicality of music and control the universal concepts of music,” junior Brandon Liang said. “He brings an expanded use of musicality and tempo-driven playing and he adds an acute focus to it.”

“Previously, I didn’t feel challenged in orchestra,” sophomore Brooke Taylor said. “I knew Irving would challenge us and that’s just what he has done.”

“Irving isn’t a perfect orchestra teacher, which is very understandable because he hasn’t taught it before […] but from a purely musical standpoint he is a really great and skilled instructor,” sophomore Kaia Dukart-Stating said. “Irving gives us more challenging pieces and makes sure that he takes our ideas into account for various things, something our previous teacher didn’t do quite as much.”

The orchestra program took a yearly trip to perform in Newport and were planning on performing at Carnegie Hall this year, but are now no longer able to do so due to the teacher changes and funding. “Though I knew [having Irving as the orchestra teacher] meant losing our Newport trip and a chance to go to Carnegie Hall, I believed that it would be better for the program, and my opinion hasn’t really changed,” Dukart-Stating said.

“I was hesitant to have him as a teacher in general due to views I’ve been given by students in his band classes, but now a few months in he’s been fine so far and been fine to play under,” Liang said. “He will not be able to teach above the beginner level for techniques as of right now; he is learning, but at this point and time he is not there just yet.”

“One of the biggest transitions for me is getting to know all of the kids and that just takes time,” Irving said. “They’re still getting to know me, my weird sense of humor, the pace, and the expectations within the class.”

“He’s working on understanding the whole orchestra thing so I’m thankful we have him,” junior Nguyen Dihn said.

Like Irving often tells his classes, “let’s go, let’s have some fun, let’s make some music, and share that passion that we have.”