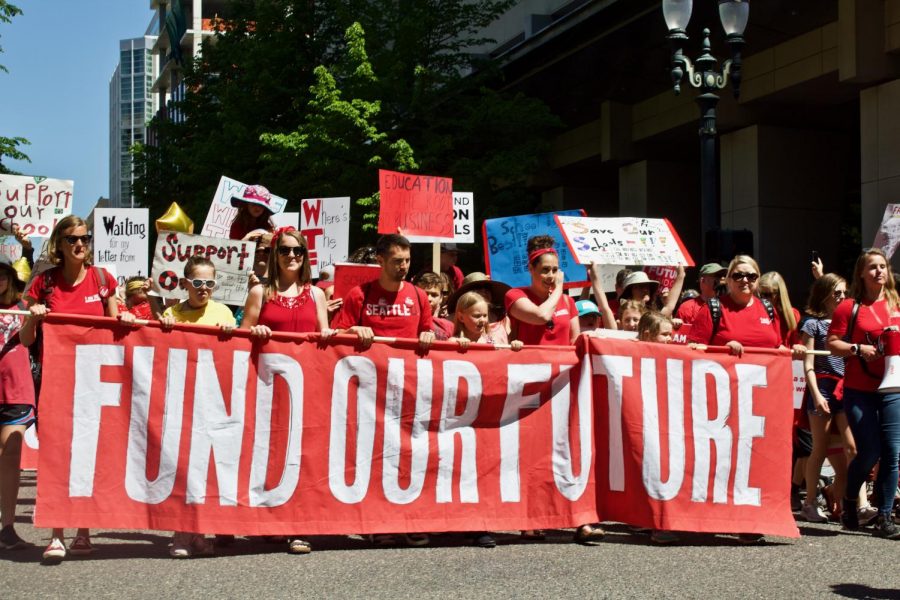 Protestors on May 8, 2018 advocated for the passing of the Student Success Act, which was signed into law July 1, 2018 by Governor Kate Brown.

The Student Success Act aims to generate an extra $1 billion annually to be distributed statewide among all Oregon schools. On top of that, the act promises a slight reduction in personal income tax rates. The money for the act will come from a raised business tax.

“For our district in [the first year] we are estimating about eight million dollars coming in through that Student Success Act,” TTSD Superintendent Sue Rieke-Smith said. From the second year onward, the district is expecting upward of $10 million coming to schools in the Tigard-Tualatin area.

This grant money comes with specific conditions for how it can be spent, namely toward the following four areas: promoting student health and safety, increasing instructional time, stabilizing class size, and rounding out elective opportunities.

All districts receiving funds from the act are obligated to put at least 50 percent into these four spending “buckets.” Up to 30 percent can be used to develop career and technical education programs in schools, with the remaining 20 percent going toward pre-kindergarten and other early learning initiatives.

“For the first time in 30 years in the state of Oregon, we are investing a significant number of dollars into our school system that can transform the work that we do with kids,” Principal Brain Bailey said. “This is a once-in-a-lifetime opportunity and TTSD is committed to doing it the right way so that all students benefit from this influx of revenue.”

“We have an amazingly talented workforce, but the challenge is that they’ve been doing some heavy lifting for a very long time without [adequate] resources,” Rieke-Smith said. “Our job is to figure out how to leverage these dollars so we can make sure that each and every student, regardless of need, is getting what they need.”

Particularly in the case of Tigard High, Bailey hopes to hire more social workers or clinical psychiatrists so that the school could directly provide these resources to students in need.

“We could provide some of those mental health components to students and to families within our four walls rather than having to coordinate with outside service providers,” Bailey said. This will help not only to cut costs but also to build a stronger internal support system within the school.

Determining where the funds would come from was one of the biggest obstacles in building support for the Student Success Act. Raising property tax was not an option thanks to Measure 5, passed in 1990, which limits the amount that property can be taxed for school funding purposes. This cap had already been reached.

Measure 97, which appeared on the ballots in 2016, was a previous attempt at attaining extra funding for schools. Unfortunately, as Rieke-Smith explains, its biggest flaw was how loosely it was written.

“[Measure 97] said at the discretion of the legislature, it could go into education but it could also go elsewhere,” Rieke-Smith said. “That was dead on arrival with major corporations.” But when a greater emphasis was put on specificity and accountability, businesses finally agreed.

“[Corporations] find it more difficult to rail against education,” Rieke-Smith said. She claims the Student Success Act’s narrowed focus was what made the difference in getting it passed into law this year. Bailey agrees that giving voters a clearer vision of what they would be paying for was essential to passing the act.

“We’ve previously struggled to gain traction with improved school funding because the window has been so wide open that nobody really knew what their taxes were going for,” Bailey said. “Now our taxpayers can say [they] know that this money is going to be spent in these four areas.” He appreciates the efforts made with this act to encourage transparency between legislators and voters.

Rieke-Smith was elated last spring to hear that the act had passed. “I was actually in tears,” she said. “I cannot thank the legislature enough[…] I’ve been in this business now for 20 years, and there hasn’t been a year when we haven’t had to fight about funding.”

“We are able to drastically think different about education,” he said. “None of us have ever experienced expanding budgets to the scope that we’re looking at with the Student Success Act.” Bailey says the schools have seen multiple cuts over the years and that the act will finally give schools the financial relief they need to target key areas that need improvement.

Associate Principal Angelita Miller was part of an Administrators of Color group that lobbied Oregon’s State Representatives and is equally excited by what the Student Success Act will mean for Tigard High.

“I was ecstatic when I heard that the Student Success Act had passed,” Miller said. She hopes the money can be used to provide equitable access to classes and to reduce academic disparities between students.

The district has already held a few community focus meetings and will hold three more this year on Oct. 29, Nov. 5, and Dec. 3. These meetings will focus on drafting the district’s continuous improvement plan and establishing which of the four “spending buckets” to prioritize with the money from the Student Success Act.

“Hopefully, families and students will be represented proportionately to student demographics at Tigard High School,” Miller said. Once an idea is in place for which areas to invest in, the district will be shifting its focus to how the money can be best used in those areas.

Administration is still looking for volunteers for the oversight committee. Students, staff, family, and anyone interested in being a part of this process are welcome to attend these community meetings and have their voices heard.