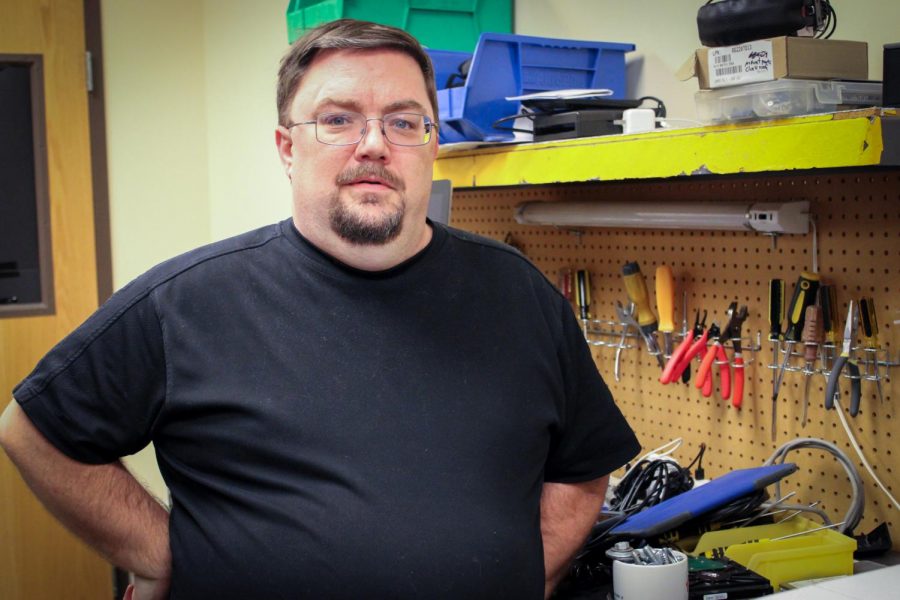 Aaron Leininger fixes school computers and doles out the Wi-Fi password. Students returned to school to find they could no longer log into the TTSD guest Wi-Fi with their phones.

Every week, a bizarre new password is created for the TTSD guest Wi-Fi only to be discovered by the student body.

Students have been upset with the change made this year to the school’s Wi-Fi network. Until June 15, everyone had been able to access the network on their phones while at school. But now, the network is protected with a new password each week in an effort to prevent students from logging on.

One student anonymously created an Instagram account, @wifi_shwifi, and started a petition asking 1000 students to sign and request that the school administration “return Tigard students’ rights and freedom with Wi-Fi.” At the time this article was published, the petition had been signed by 156 people and the Instagram page had 84 followers.

“I think that the Wi-Fi is being withheld from the students in a very forceful manner,” the profile of the account read.

Associate Principal Tyler Davila explained why the Wi-Fi was restricted from students this year. One reason was to eliminate the use of personal technology so the new one-to-one Chromebook rollout could run efficiently. “[Having it] password protected is one way to help do that,” Davila said.

“I get why they want it,” Davila said, referring to the students. “At the same time…providing access learning through the Chromebooks [is important].”

Language arts teacher Jodi Mello explained that teachers are able to access the Wi-Fi but are instructed to keep the password hidden from students.

“[They should] listen to students and problem solve,” Mello said.

Several students have noticed that the lack of Wi-Fi at school could present a safety hazard if some accident were to occur. Those who don’t have reception or data would not be able to contact home in an emergency situation.

Freshman Jacob Spencer didn’t think keeping students off of the Wi-Fi was fair.

“People with limited data have to pay extra to be on their phones while at school,” Spencer said.

Some students, however, were completely unphased and unaffected from the Wi-Fi restriction. Junior Georgia Black explained that some students, including her, don’t have to worry about finding out the password each week.

“I don’t really care; I have unlimited data,” Black said.

Senior Sara Johnson, who has experienced the ups and downs throughout the years with the school Wi-Fi, shared her point of view on the current situation.

“The Wi-Fi is bad anyways, so what’s the point of getting it back?” she asked.

The Wi-Fi lockdown caused classroom troubles for students in Megan Cooney’s IB Literature and Language class. Senior Katelyn Willhoit struggled to upload a large file from her phone onto her Chromebook for a class assignment. Cooney contacted Principal Brian Bailey during class hoping to get the Wi-Fi password, but he did not know the password. Network and Systems Administrator Aaron Leininger came to help the class and explained the students couldn’t use the password, even for classwork.

Leininger has been carrying out the new policy by locking down the network and giving faculty the password on an as-needed basis only.

“[It was] not my decision; district office did most of it,” Leininger said.

Leininger noticed what was happening before the Wi-Fi was restricted and anticipated the reactions from the students.

“[The reactions from students are] totally expected; they are used to having it. Before there was massive disruption on YouTube in classrooms” Leininger said. He had noticed students with their phones out under desks and tables secretly streaming videos during class time.

Leininger explained how he was asked to track the network usage. For example, at the time of the interview, only 15 people in the past week requested the Wi-Fi password from him but about 140 devices were using it. Those numbers were a clear indication students had the Wi-Fi password.

Leininger also described what it was like for students at Tualatin High School. Their policy is identical to Tigard’s, but their building blocks cell phone signals almost completely. At Tualatin 30 people had requested the Wi-Fi password, while 1000 devices were using it.

Tualatin High School senior Lilly Bland explained how she isn’t able to text her parents when she needs because the building blocks her cell. She also mentioned how the password couldn’t be shared.

“The IT guy is the only [person who] has the password, and even staff have to give their phones and laptops to him and he will type in the password,” Bland said.

Will taking the petition to administration change the big fuss over Wi-Fi? Or will students eventually forget about it?

Junior Kit Webster describes an alternative way to go about the policy of having phones off and away instead of just restricting the Wi-Fi completely.

“I believe the teachers would be better off just taking the phones at the start of class,” Webster said.