Frosh are the focus 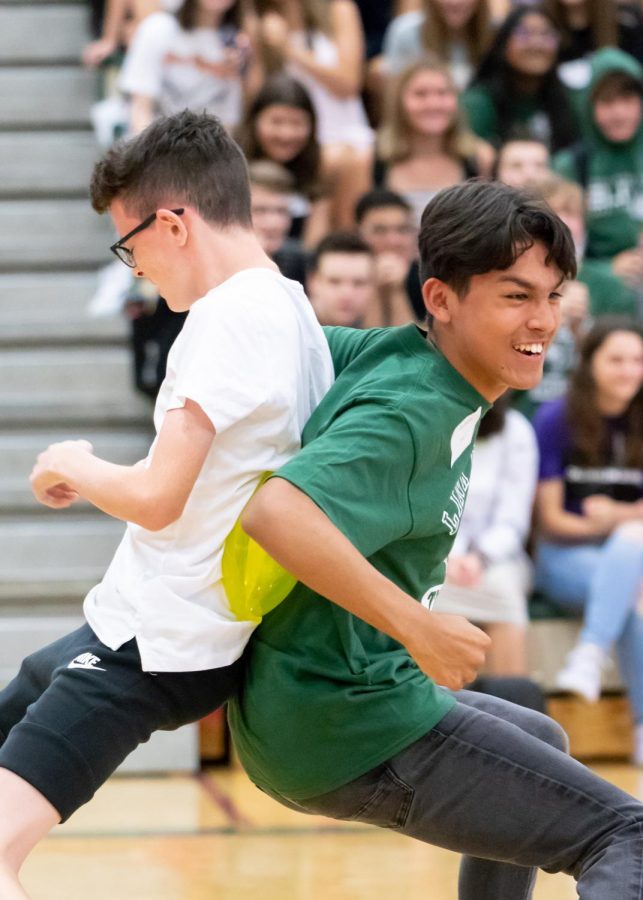 During Freshman Orientation, freshman Isaac Lafohn and junior Anthony Salazar tried to pop balloons back-to-back. It wasn't as easy as it looked.

By Students in Intro to Journalism class, staff writers

The following story was team-written on the FIRST DAY of class by Intro. To Pubs. students.

It was crazy and hectic; it smelled like sweaty hormonal teenagers with a whiff of anxiety here and there.

Freshman orientation was a day for freshmen to connect with upperclassmen and their peers and find their classrooms in the new building.

For many freshmen, it was their first time on campus.

“Entering [the building] for the first time was overwhelming and exciting,” freshman Ella James said. James has positive plans for her high school career.

“I hope to make new friends and expand my interests,” she said.

On Track Coordinator Cynthia Pellicci planned the day. It is part of her job responsibility because the data shows that if students are on track to graduate by the end of freshman year, they are much more likely to get their diploma at the end of their four years.

The freshman orientation, like always, started in the gym.

“In the gym we did icebreakers and got into our Link Crews; the gym was hot and crowded,” freshman Joey James said. Joey and Ella are twins.

Pellicci explained that connections are an important factor for student success.

“Its really important for students to feel connected to people and the community; if they feel isolated, they will withdraw from school, and my biggest fear is for freshmen to feel alone,” she said.

The James twins already have plans to make connections by joining activities. ”I want to make the baseball team,” Joey said.

After the gym, freshmen moved to the classrooms with their Link leaders to participate in some games. Then they ate lunch and went to a shortened version of their classes.

“I met new people, and we played games to get to know each other; the games were boring but they helped bring us together,” freshman Brooke Baxter said. “The Link leaders were super enthusiastic and excited to get to know us, though one of my Link leaders did lose interest halfway through the activities.”

In addition to navigating high school for the first time, freshmen also had to find their way around a brand new building.

“Construction caused a lot of roadblocks in getting to where you needed to be,” freshman Emma Helm said. “Hopefully the high school will be finished by the time we all graduate; it would make it easier to get around.”

Even the Link Crew leaders were seeing the buildings and some construction for the first time, leading some freshmen on long, loopy tours.

“The freshman orientation was very chaotic; however, it was very helpful getting to know our surroundings,” Baxter said.

Freshman orientation was just a practice run for the real thing. The school year starts in earnest today, Sept. 4.

“This semester I am excited for biology because the teacher is accepting of my egotistical self and my talking habits–meaning I never shut-up,” Baxter said.