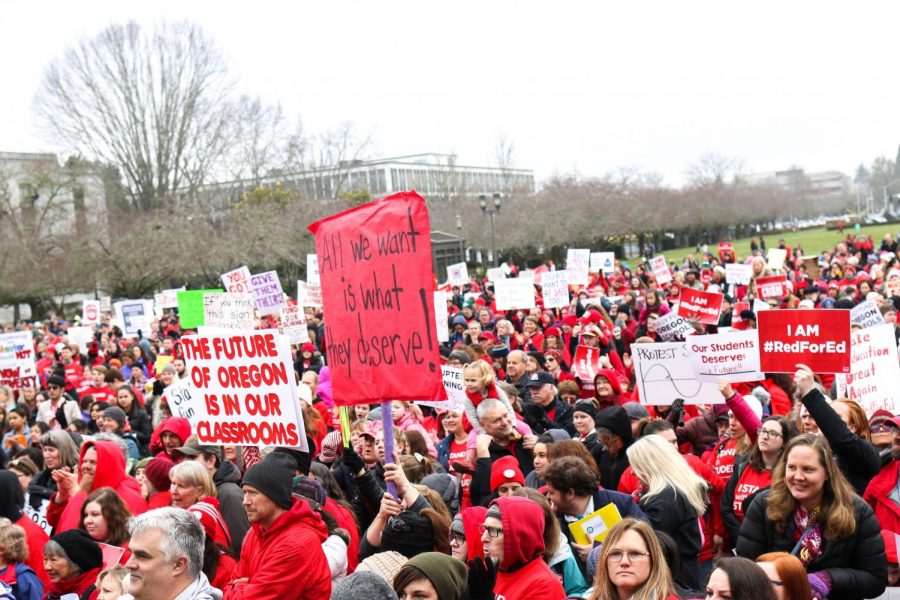 By Meghan Turley and Olivia Young

The Tigard Tualatin school district has decided to close school this Wednesday, May 8, in anticipation of the teacher walkouts planned statewide.

The District’s decision was caused by the unprecedented numbers of teachers planning to take the day off in order to attend rallies across the state. The Rallies, known as “Red for Education rallies” are planned as a collective work of civil disobedience from teachers statewide. The rallies call on legislators to better fund public schools and give higher priorities to student education. Oregon currently has one of the lowest graduation rates in the nation. Specifically, teachers are hoping to persuade legislators to pass the Student Success Act, which recently passed along party lines. The act was introduced by lawmakers and aims to add an additional $2 billion dollars of funding into Oregon education through imposing taxes on businesses.

Many TTSD educators and students are planning to attend the rallies. Representatives for the union at Tigard High School, Murray Carlisle and John Weber are both planning to show support on May 8.

For Weber, the day is about telling legislators in Salem that school funding should be a priority.

“It’s to send a message to the state that funding, not just our district but all schools in all districts across the state, should step up,” Weber said. “Come to the table and accurately fund our schools in the present and in the future.”

To compensate for the lost day, Tigard Tualatin School District has decided to add an additional school day to the end of the year. Tigard also had an 8-period day on Tuesday. After adding an additional snow makeup day earlier in the year, the decision to cancel Wednesday has pushed the end of the school year forward two days from the original date of June 12.

Some students are unhappy with the decision to cancel school. Junior Ellie Heffley feels that in the long run, the closure was not in the best interest of students.

Other students feel that the cancellation is is beneficial for those preparing to take IB exams.

“I’m actually really happy about it,” junior Ethan McClelland says. “Being an IB student with exams starting the 13th, an entire day off to study helps to take some of the stress off.”

While seniors won’t have to make up the additional day due to graduation, some feel it’s pointless to cancel school if it must be made up anyways.

“I feel like the whole point of it is to make a statement for supporting the teachers, but that point is defeated if they have to make it up anyways,” senior Catherine Frisiras says. “I’m glad they cancelled Wednesday though, so that teachers could have that day, since a lot of them don’t have floating holidays and felt pressure from the district to go to school even if they felt it was the wrong thing to do.”

The Tigard Tualatin Education Association came up with the idea of using a floating holiday to show solidarity to the cause, without actually having to break the rules of their negotiated contract. The decision the district made was reflective of the fact they knew they wouldn’t’ be able to find enough substitutes.

Weber feels that the cancellation for the rally will help prove to Oregon teachers dedication to improving graduation rates and public education funding.

“We keep hearing [from the state] ‘Education’s really important, we’re gonna provide more funding’ and then they don’t provide more funding, and there is a lot of big problems in our schools and a lot of things where students aren’t getting what they need from the state, and we want the state to realize that they have an obligation.” Weber said.“ It’s not just about Tigard and Tualatin; it’s about the entire state.”

Overall, Weber and Carlisle want to stress that this is not TTSD teachers against the district. The teachers are working together with the district, and are instead calling upon the state to accurately fund schools.

A vote on the Student Success Act is currently being delayed by Senate Republicans, but is expected to be as early as this week.