Becoming one with the Press, one with Michelle Obama

Editors Maddie Cooke and Meghan Turley recount their experience with Michelle Obama’s visit to Portland, and her influence in the community 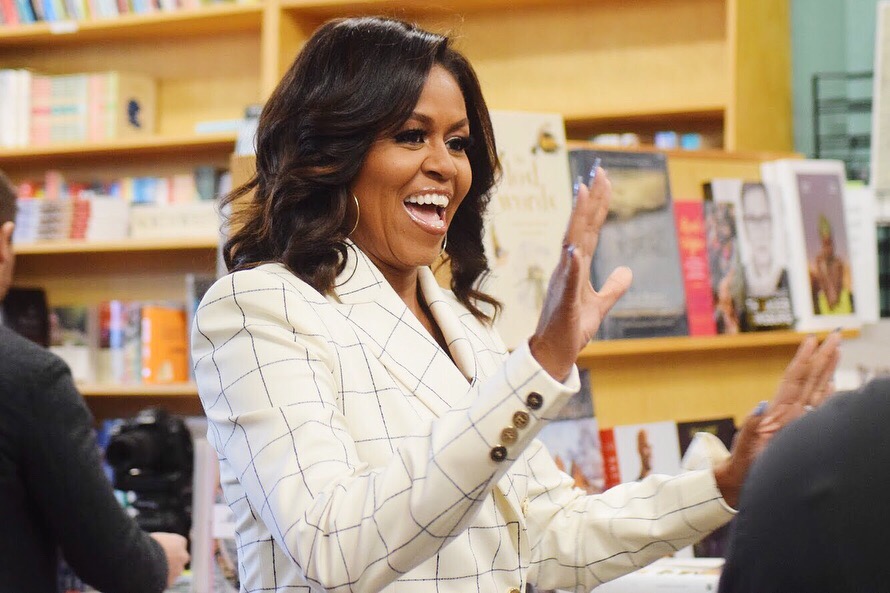 As the anxious members of the book club await Michelle Obama's arrival, they practice yoga moves and breathing techniques to calm their excitement. Mrs. Obama's enthusiasm to see the group sparked thoughtful and personal conversations. One member shared her background of raising her young daughter, who had a lot of energy and 'spunk'. In humor and response, Mrs. Obama asked, "And which side of the family do you think that came from?"

By Maddie Cooke and Meghan Turley

Broadway Books welcomes Michelle
On Tuesday, former first lady Michelle Obama came to Portland, as she is touring for her memoir, “Becoming”.

Ahead of her evening appearance at the Moda Center, Mrs. Obama met with members of a local Portland book club at Broadway Books in Downtown Portland. The club had been meeting since 2015 and “Becoming” was their January book.

As the meeting started, Mrs. Obama explained her purpose behind her memoir, and how she came to a clear goal for her story.

“I had to dig deep within to figure out why I wanted to make this book,” Mrs. Obama said.“I found that I had to explain myself. I was in corporate law with a successful career, and I needed to know, how do I explain to the world that I walked away from all of this for the life I had now?”

Many of the book club members empathized with the many parts of Mrs. Obama’s story. One member became emotional as she described her relation to a particular theme of the memoir: the importance of family.

“I felt like the theme that tied it all together was family,” the member said. “Which is clearly a number one, for me, as I was reading. It always came back to the foundation of your people-whether they’re chosen or your birth family.”

Mrs. Obama also emphasized how the memoir was more about the development of herself as an individual than her eight years spent in the White House.

“Our foundations are those stories,” Mrs. Obama said. “The little things, particularly as women, we think are nothing. We tend to write off those little moments that stick with us as not meaningful, but that’s what we miss. We miss that our stories are important.”

Student journalists in the Press Pool
Walking into the bookstore, Meghan and I were greeted by secret service, the media management and other journalists who were in our company. It was obvious that we were not the professional journalists that would normally be covering this event; at one point, Meghan and I realized we didn’t have the fancy ID badges that represented our publication. Although we were so excited to be covering this event, we were still awkward teenagers who didn’t know what we were doing.

Standing in the press pool section felt like a major success for us, as we were the youngest and possibly most inexperienced there. After a short introduction and run-through with the media procedure, we eventually mustered some confidence to interact with the other journalists.

The event was scheduled to start at 2:30 p.m., but for planning and organization purposes, we arrived at around 12:30. During this time, we had amazing conversations with journalists and producers from reputable publications, such as iHeartRadio and Fox News. From them, we learned more about the daily life of most journalists, and how influential media can be.

Time flew faster as we became more acquainted with the other journalists and reporters, which helped alleviate the anticipation to see Michelle Obama. We personally have not read her book yet, but the opportunity to report on this event has inspired us both to purchase one to read.

The moment Michelle came into the room, excitement and pure awe filled the small yet intimate bookstore. Hearing her voice and seeing how she interacted with everyday folk was refreshing. Michelle had a calm but captivating demeanor and spoke with sincerity.

A point she consistently went back to was the importance of a story, which resonated with me the most throughout her entire discussion. As a journalist, it is always important to have a clear angle and purpose with our stories, and this generally is the hardest yet most crucial part of our jobs. I hope to learn more from her memoir, and the experience with seeing Michelle in person and listening to her voice has made for one of my greatest moments as a journalist and individual.
MODA Center hosts BECOMING event
On Tuesday evening, former First Lady Michelle Obama made a stop at the Moda Center in downtown Portland for her tour on her recent memoir, “Becoming”. Throughout this event, Mrs. Obama described her roots and pathway of finding her voice, as she further examined her role as a wife, first lady and mother.

The Moda Center was entirely sold out for the event, with some attendees making the journey from Woodburn and Gresham. Governor Kate Brown was also in attendance. The audience was very engaged with Mrs. Obama’s stories, cheering loudly at mentions of her husband and personal triumphs. At one point, Michelle joked about her husband wanting a third child during his presidency.

The conversation was moderated by Sam Kass, who served as President Barack Obama’s senior nutrition policy advisor and Executive Director of Michelle Obama’s “Let’s Move!” Campaign. Mrs. Obama talked extensively about the role family and good meals have served in her life.

“I had parents who valued my voice from an early age,” Mrs. Obama said. “I had a father who was a strong role model for me, and a figure that I and the rest of my siblings could look up to.”

She went on to describe her experience through beginning levels of education, all the way to her graduate schooling. Although Mrs. Obama received her education from Princeton and Harvard, she initially faced a negative response from her counselor, who didn’t believe in her ability to reach a higher education.

“My high school counselor told me I could never make it into an Ivy League school,” Mrs. Obama said. “Comments like that, they stick in your head. That still sticks in my head, because that is what happens to kids.”

Even dating back to her youth, Mrs. Obama proclaimed herself to be a ‘box checker’, where she would set goals for herself that she determined would make her achieve success if completed.

“For me, the box checking was a way to prove to people out there, who thought I wasn’t good enough, that they were wrong,” Mrs. Obama said. “I told myself that I had to go to the absolute best law school in the world, because I don’t want anyone to ever tell me that I don’t belong. That I am not qualified. That I am not worthy.”

Overtime, Mrs. Obama self-reflected on her ways of box checking. She realized shortly after a relationship with Barack that this way of life wasn’t the one that proved anything about her.

“I was always checking the boxes that I thought would prove something. And as we found out, it is not always proof of anything,” Mrs. Obama said.

After Mrs. Obama went into more details about her education and family, she started to discuss more about her life and the time she spent in the White House. The eight years she spent was described as an emotional challenge, since it was a big adjustment for her and the family.

“It wasn’t easy, any of it. When people are going through something rough, I don’t want them to think they’re broken,” Mrs. Obama said. “When in reality, they’re just doing something that is really hard.”

She noted how even her relationship with Barack wasn’t perfect, and the reality of this is more present than most people think.

“I think it’s kind of funny when I see a picture of me and Barack with ‘hashtag relationship goals,’” Mrs. Obama said. “This image of what seems to be perfect isn’t always the reality. We have been through a lot to get this far.”

Overall, Mrs. Obama tried to go in detail about a variety of themes and ideas in her memoir. From the small details about how her beginning with Barack, to the moments her husband was announced the President of the United States and even when she experienced the changes from a wife to a new mother. Towards the end of the event, Mrs. Obama’s last words to the audience were founded on her main goal of uniting the community with her memoir.

“There are so many ways to be human, and there are so many valid ways to live this life,” Mrs. Obama said. “We own who we are with pride. Every bump and bruise makes us who we are, and that is our story. People get afraid when they are told to be afraid, but we are all worthy of sharing who we are.”

A special thanks to Live Nation concerts and the Media Administration for Michelle Obama, who gave our journalists the opportunity to cover the Broadway Book and Moda Center events.