Happily ever after, all week long 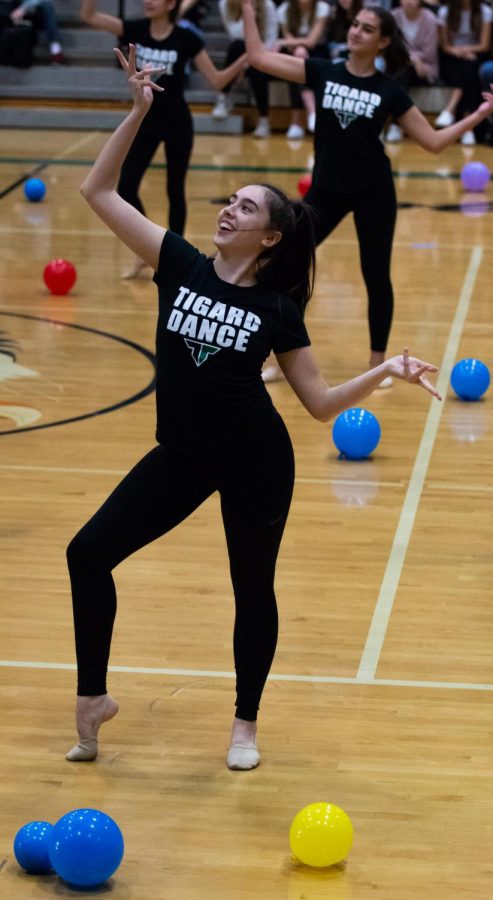 During homecoming week, students dressed up for a different theme each day. On Monday, people dressed in green or included memes into their outfits. Tuesday was both superhero day and neon day. Wednesday was wacky shirt and sock day, while on Thursday people wore blue or something Disney themed.

Senior Ellen Hajduk loved participating, and coordinated her outfits depending on the day.

“I participated in the super hero Tuesday and the wacky sock Wednesday. For superhero day I had a marvel shirt that had superheros on it. For wacky Wednesday I wore wacky socks with dinosaurs on them,” Hajduk said.

Senior Tyler Walker dressed up with french fry covered socks for Wacky Shirt/Wacky Sock Day. Walker enjoyed wearing the wacky socks, especially since they were french fries, which she feels that anybody can relate to.

“I feel like Spirit Week is only fun when everybody can relate to it and it’s not forced,” Walker said. “Tigard spirit comes from the heart of the Tigard Tigers.”

“I’ve worked in schools for the past six years, so it’s not new to me, but to actually be a teacher, I get to see it more than what I saw before,” he said. “I think it’s cool. It’s a good way to bring students together and have fun and enjoy our time at school that’s outside of academics.”

McIsaac also said he enjoys the dressing up for spirit days quite a bit. He remarked that some of his favorite costumes on meme day included students wearing a Boy Scout uniform and a Spider-Girl onesie.

“I think the dress-up days are kind of fun,” he said. “I like seeing students who really get after it and… do it every day.”

Powderpuff has become a tradition that the student body looks forward to when homecoming week comes around. Even though not everyone signs up to play, the tournament games bring many of the students together to cheer on and encourage the ladies of Tigard High School.

“It’s a good way to get people to come and support,” junior Abby Goodell said. Goodell is playing on the junior powderpuff team and believes that this is a great way for students to get pumped about homecoming and come together during a week of fun and celebration.

“It’s definitely a big event and a lot of people go to it; it’s going to be fun,” Goodell said. Along with the players there will be guy cheerleaders and a large group of people coming to watch the event creating a good time for all.

Many students looked forward to the Oct. 11 homecoming court assembly because of the school unity between all of the classes. Despite the sound system troubles, students seemed to be engaged and entertained with this year’s skit. There were some changes to the assembly compared to past years. For example, when the MC’s called the winners for the homecoming court, instead of calling them down individually, they called them all down at once. For the people watching, this was a little confusing to see who was going where.

“My favorite part is seeing who got nominated and seeing their parents give them the sashes. I think that is really cute,” junior Emma Vu said.

Despite all of the difference of opinions on the assembly, it really achieved getting people excited for the rest of homecoming week.

As the parade makes its way down Durham, members of the community line the streets to collect candy and cheer on those partaking in the parade. To get the parade up and running however is no easy task. Leadership has to create the lineup for the parade and get the word out to the community and clubs so they have enough groups to march.

“Getting the word out to clubs and community to enter a float or group into the parade was the hardest part,” ASB Activites Alex Bledsoe said.

The parade kicks off the homecoming weekend, bringing the community together before the football game later that night.

“The best part of the parade is seeing all of the planning and work come together and run well,” Bledsoe said.

The parade start location is 113th. The first float leaves the Rite Aid parking lot at 5 and makes its way down Durham to the high school. Following the parade is the homecoming football game which starts at 7 against Lakeridge.

All groups and clubs can enter a float in the parade.

Four thespians, including junior Xander Dean, have been overseeing the design of their float since Oct. 1.

“As an elected officer of the Thespian Troupe, it is part of my responsibility to orchestrate multiple events throughout the year,” Dean said. “I’ve chosen to design and produce the Thespian float as one of my events.”

The thespians are planning to add their own theatrical twist to their fairytale-themed float. “Since we are a theatrical group, we wanted to incorporate an aspect of theatre by having actors play characters for kids to interact with,” Dean said. Attendees of the parade will meet Little Red Riding Hood, the Big Bad Wolf, Peter Pan, and Wendy, among other classic fairytale characters, walking alongside the thespian troupe’s float.

Tigerettes aren’t just in the parade, they are also performing in the assembly and at the football game. They have a busy week ahead of them. Junior Tigerettes Kayla Lam and Olivia Watson gave a preview of these upcoming events.

“We don’t know what we’ll be doing for the assembly yet, but it will definitely be interesting,”  Lam said. During the parade, “we’re going to be doing our fight song routine alongside the band playing “Celebration,’” Lam said. As for the homecoming game, they will perform a slightly changed version of the camp dance that the Tigerettes learned over the summer. According to Watson, one can expect the performances to be super good and super fun.

“It’s a football game no different for us, we go and do what we always do and treat it like a normal game and play tigard football” Junior Kamryn Hosley said.

The team is there to perform well and try their hardest.

“Just another game that we have to be prepare to play for and go out and do our thing,” junior Jackson Clever said.

Every year, the choir class works in tandem with Leadership to plan the homecoming dance. Robert Hawthorne, the school’s choir teacher, looks forward to choir’s involvement every year. There are multiple aspects of that night that choir’s involved with, including hiring the DJ, doing the posters/ tickets, preparing the decorations, etc. He thinks it’s very fun, and is always excited to get back into the groove of planning this highly anticipated event.

“[I’m] looking forward to lots of people coming, having a good time, enjoying themselves, and staying safe,” Hawthorne said.

Along with the other choir students, Hawthorne will be hard at work Saturday, making sure that the dance is perfect for all attendants. Select choir students will be working coat check, while others will be putting the finishing touches on the night.

Hoco spirit for all?

Although homecoming activities are meant to be an opportunity for everyone in the community to get involved, some students aren’t convinced.

Senior Jacob Alik hasn’t been impressed with the dance during his high school years.

“I think [the homecoming dance] is overrated, and the music in some years wasn’t as good or popular as it should’ve been,” he said.

On the other hand, he enjoyed the parade.

“The parade is a good thing for the community; it brings people together and the students can present their floats and stuff,” Alik said.

“At Tigard it’s nothing special; I wish it was more inclusive.”

Other just don’t really have an opinion one way or another.

“I don’t really have an opinion on it,” senior Aarie Good said.