It’s going to be ugly before it gets pretty

Waaaaaaa, that's the sound of students complaining about parking for next year 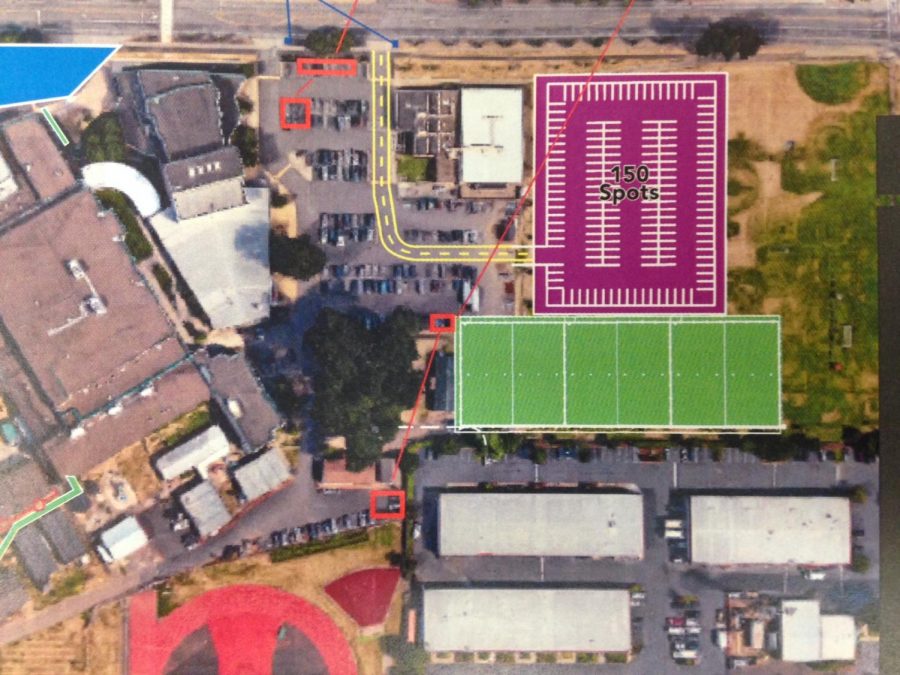 For next year there will be 150 parking spots for students behind the swim center.

By Olivia Young and Megan Le

The parking situation at THS has been a heated topic recently.

Because of construction, the number of parking spaces will be drastically cut, and students who are able to drive themselves to school are left to wonder what the parking lot situation is going to be like for the next two years.

While many rumors fly around about different scenarios, here is the official word. Students may not like it, but they will have to deal with it.

According to Principal Andy Van Fleet, the school plans on turning over the first two northernmost tennis courts to the construction crew. The current student lot will be going away as of the last day of school and will be used by the crew for staging. Additionally, many of the spots along the tennis courts and 92nd Street will be taken over by construction. Altogether approximately 225 parking spots will be going away when the main lot and the additional spots along the first couple of tennis courts are handed over to the construction crew.

However, a new, temporary lot will be created for students. Gravel will be poured onto the fabric laid down on the soccer field behind the swim lot to create a makeshift parking lot of about 150 parking spots for seniors during time of construction. Once the temporary lot is complete, there will still be a loss of parking for students but only by about 60-75 parking spots.

“It will be primarily first come for seniors next year, and juniors will most likely be placed in a lottery and we don’t know what that number is yet,” Van Fleet said. “With the volume of construction workers, where the build is occurring and the materials that need to be housed on site, I think it is the most efficient way.”

There are economic reasons behind Van Fleet’s assessment. “If we have to store building materials, and contractors have to park off site, then we’ll get charged for their transportation to and from location and to rent out other spaces to put all the building materials which will make the build cost more money,” Van Fleet said. “Unfortunately, we’ve thrown everything on the table and this is the most efficient way.”

Current junior Hailey Bigej is concerned about the parking situation next year. “I’m stressed, and the gravel is so bad for our cars,” Bigej said. “I have meetings and stuff before school so I will get there early enough to get a spot. But it’s the people with first release that I’m worried about.” Students who have had to park far down on the side lot or in the neighborhoods have waited until lunch time or a free period to re-park their cars in the main lot. And she worries that students will be unable to leave for lunch because of fear of losing their spot with even more limited parking spaces.

Bigej is also unsure about how strictly the senior parking only rule will be reinforced with it being reinstated for the following years. “That doesn’t mean the juniors and sophomores won’t park illegally,” she said. “Pete better buy a ton of stickers.”

Sophomore Abby Goodell doesn’t feel that the new parking situation is fair to incoming sophomores and juniors who will no longer be able to drive themselves to school. Goodell, who has her license, frequently drives herself to school, and enjoys doing so. “I don’t think [the parking situation] is entirely fair; I think it should be first come first serve,” Goodell said. She feels that it’s unfair for students who have been driving themselves to school this year, to be stripped of their driving privileges next year. Goodell believes that instead of being placed in a lottery and being picked at random, the juniors should have the same first come, first served rule that will be applied to the seniors who will be purchasing parking passes.

Van Fleet is sympathetic with next year’s juniors and sophomores who will more than likely be disappointed due to lack of parking, but he is hopeful that students will understand the school literally no longer has the space.

“We’re kind of reverting back to the policy we had two years ago which was seniors only and juniors in the lottery,” he said.

There were initial talks of shuttling students from other parking areas back to the school, but concern was expressed for those who are involved in extracurriculars and might have to walk back to their cars in the dark.

“There are just so many safety concerns that students who show up who are in athletics or are at other events who can’t find a parking spot here, and then they park at the church or wherever,” Van Fleet said. “They don’t get back until 10 o’clock or midnight. Now they’re walking in the dark to an area that is not on our campus and that safety risk is not something we’re willing to tolerate.”

Head of Security Stace Shillitto wants students to know that this process will be completely fair, and that all juniors will have the same opportunity to get a parking pass. He has been monitoring the school’s parking lots with Pete Kostel and Jason Stanley for 28 years.

“Even though we will be losing some parking spaces, it will be a fair process. All juniors, once the seniors have had an opportunity to buy a parking pass, will be entered into a fair, possibly public, raffle,” Shillitto said.

Hopefully now many of the rumors have been dispelled about next year. Sophomores and Juniors may have to readjust how they get to school, but it will be a small price to pay for a brand new school. It may be ugly for awhile, but it’ll be beautiful again.