Tigard joins the students of America in a national walkout 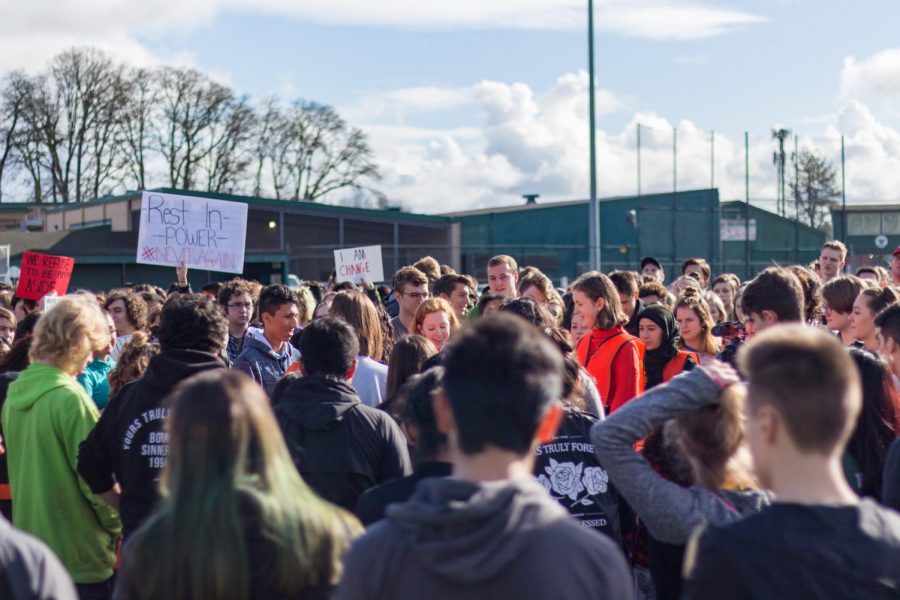 As part of the March 14 student walkout, organizers share a message of solidarity and change.

To stand in solidarity with Parkland and be a part of the national movement that the Parkland students have created, over 300 Tigard High School students walked out of their classes to participate in the national school walkout on March 14.

Students first went out of their classes at 9:55 a.m., then met up in the commons and walked out at 10:00 a.m. Students walked through the parking lot, around the tennis court, and then gathered on the football field. Alongside of the perimeter of the walkout, there were a few teachers who supervised if they had a prep period or all their students in their class were walking out. A few Tigard policemen also dotted the perimeter, intended to keep the walkout safe by preventing any outside members from participating.

A few students made and brought signs with the national hashtag “#neveragain” and other messages like “rest in power”, “NRA there is blood on your hands”, and “Fear has no place in schools.”  Some also wore orange, the color for gun violence prevention. The three hundred students gathered together in the center, while the 12 organizers of the walkout stood the middle, wearing bright orange safety vests.

In giant bold letters the message “THS stands with MSDS” was displayed on a big orange banner and proudly displayed by a couple of the organizers. It will be in the commons all week, where students will have the opportunity to sign it and show they stand in solidarity with the students of Marjory Stoneman Douglas High School. The banner will eventually be sent to their high school.

Organizer Senior Mayra Favela read off the names of the seventeen people who were killed in the Parkland shooting, while the other students stood in respectful silence. Then seventeen orange balloons were then released into the sky to represent the victims, and the walkout was also seventeen minutes long for the same reason.

Freshman Elijah Webster participated in the walkout, and he believes that the walkout brings attention an important problem.

“This is a school environment, and I don’t think I should be scared to come to school,” Webster said.

Junior Kate Garcia was also another one of the many others that participated in the walkout, and she advocates for having students’ voices heard.

“I think if we could do something with an impact and have our voice heard, we should. This walkout is also important in paying tribute to those who passed away,” Garcia said.

The organizers also made it clear that this march was just a part of the beginning. If students wanted to take further action, they were encouraged to participate in the March for our Lives on March 24.

There was some confusion about the message of the protest. When interviewed on Tigard Today, the spokespeople stated a couple times over that it wasn’t political. Yet, there was an obvious political message during the actual walkout, notably sophomore Meghan Turley advocating for calling and writing legislators and other organizers encouraging students to make change happen.

When asked if the walkout was intended to be political or not, Turley said, “We have been dodging [that question] a lot since if students thought it was a political walkout they would be hesitant to walkout or wouldn’t walkout at all. But it is a political problem, so when you are walking out it, it does become political.”

“I do think that Tigard High’s main goal was to stand in solidarity with Parkland and the families of the victims. I also hope that students know that they have the ability to enact change on the issue if it’s something they care about, but what that looks like depends ultimately on them,” Turley said.

During the walkout, there were a group of students dressed in black who held their own version of protest, gathered by the steps underneath the flagpole outside of the football field. They didn’t agree with the format of the walkout, as it focused too much on “publicity.” Their intent instead was to respect and pray for the families of the victims in Parkland. They also believed that the message of the walkout was wrong, as they didn’t believe in gun reform. One wore an NRA hat and another wore a “Make America Great Again” hat.

Sophomore Owen Wolf was one who stood with them. “We did not protest because we want to respect the families and pray for them,” Wolf said.

This march was sponsored by Women’s March Youth, who wants to see a change in gun control legislation. The national message and Parland student’s message is a plea for regulations that will prevent future shootings.

The punishments for students varied, although teachers or other staff could not punish more harshly than they would have otherwise for missing class. Administration could also not encourage or discourage students from participating in the walkout.

Associate Principal Angelita Miller has a clear understanding of the policy and offers the administration’s perspective on the walkout.

“We as administrators or teachers weren’t allowed to encourage the students to go to a walkout but neither were we allowed to discourage students from walking out. This was going to be a student choice,” Miller said.

All staff members did have knowledge of the walkout beforehand. The policy was to give a student a tardy if they returned by 10:30 a.m. and an unexcused absence if they returned later. But what teachers actually did varied, with some giving tardies and others not. Students were confused about the punishment as they believed there wouldn’t be any punishments from what the spokespeople on Tigard Today had said.

Senior Trevor Rabosky was under the impression that he wasn’t going to obtain a tardy when he walked out and believes that there was too much confusion over what the policy was going to be.

Going forward, the school is working on improving the safety and security so that all everyone can feel safer. A change that has already been implemented is locking side doors to reduce the points of entry in the school. To further prepare students, there is also going to be a lockdown drill during passing time, giving students a better idea of what such a situation might really look like. Administration and the school board also plans to take a look at the Standard Response Protocol, which is the response that the school is trained for emergencies, and see if it needs to be updated.

Some students complained that since the administration knew and was allowing it to happen, then it wasn’t a “real” walkout. Nonetheless, student who walked out were still a part of a movement that was much greater than themselves.

“Maybe some kids feel like it wasn’t extreme enough, but it definitely was something that we don’t do every day. And they really did pause on their education; they left their classrooms.

They were definitely visible to the community and had a gigantic presence in the middle of the football field,” Miller said.