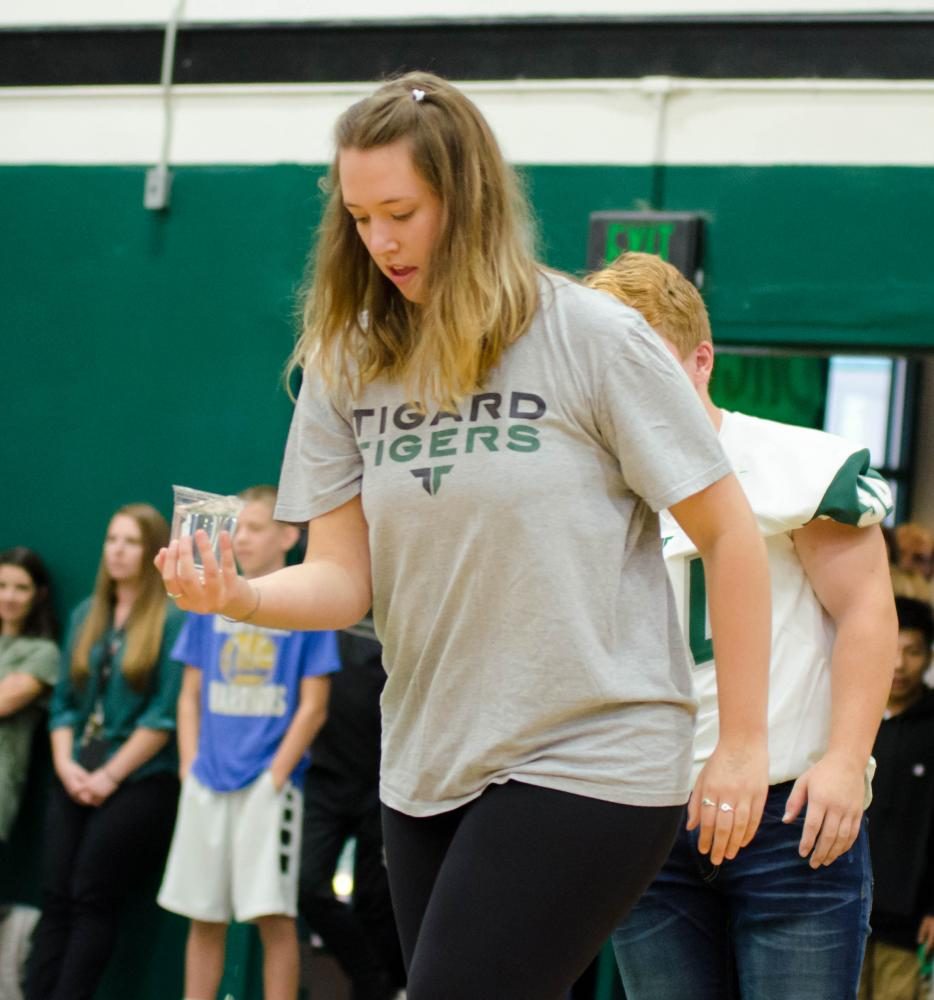 Annie Nihill competes in the cup of water walk for her senior team at the back-to-school assembly.

The band roared and the crowd cheered; the cheerleaders danced and the choir students sang their hearts out. The back-to-school assembly, as per usual, was filled with positive energy to welcome the student body back to Tigard High.

The assembly began when the choir sang “The Star-Spangled Banner.” The Tigerettes broke into a dance routine near the end. In between there was competition and spirit. “I really liked when the cheerleaders went through the cheers and all the freshmen seemed really confused. It was funny,” senior Miranda Stocker said.

The assembly was motivating for many students. “I feel inspired because it made me feel enthusiastic for the new school year,” sophomore Nyleen Krieske said. For freshmen it was their first spirit assembly in high school. “It inspired me to do great this year because school spirit and positivity seems to be a big importance to Tigard, I love that.” freshman Grace O’Neil said.

The jokes, which were filler at the end to make the assembly last a little longer, were another highlight for many students. Students agreed that they were terrible jokes, but they still enjoyed the puns. “I really liked the jokes. They definitely made me laugh,” freshman Kate Cook said.

The assembly also served to introduce Andrew Kearl, the school’s new associate principal, to the tiger spirit. “I didn’t know what to expect. I think for the most part, kids were really attentive,” Kearl said. “The concert choir blew me away. The kids knew all the cheers, and the band was really strong.”

Kearl has worked at four other high schools, but he particularly enjoyed the unity of this one. In the past, he had experienced lots of competition between the classes. “It’s nice that there wasn’t that interrupting rivalry [here],” Kearl said. “Kids have an option to feel connected in many ways. There’s a place for every kid here.”

ASB assembly officer Lauren Denham gave insight into the process of planning an assembly. First it took her about a month to write it, but she didn’t do it alone.  “A lot of collaboration went into making this assembly as smooth and interesting as possible. I wanted to show the students that being energetic and having good spirit can be fun. It’s important to showcase all the different parts of our school,” Denham said.

Denham’s work for the year has just begun. She wants to add more substance, such as more performances or games, to future assemblies to make them even more interesting for the Tigard family. In the future Denham plans on pulling more people from the crowd to further engage the student body in performances and on having more assemblies.

Denham’s planning and the packed gym made for a strong feeling of togetherness. ”It seems like we are one big community,” said freshman Gillian Coplin.