Tech team’s mission is out of this world 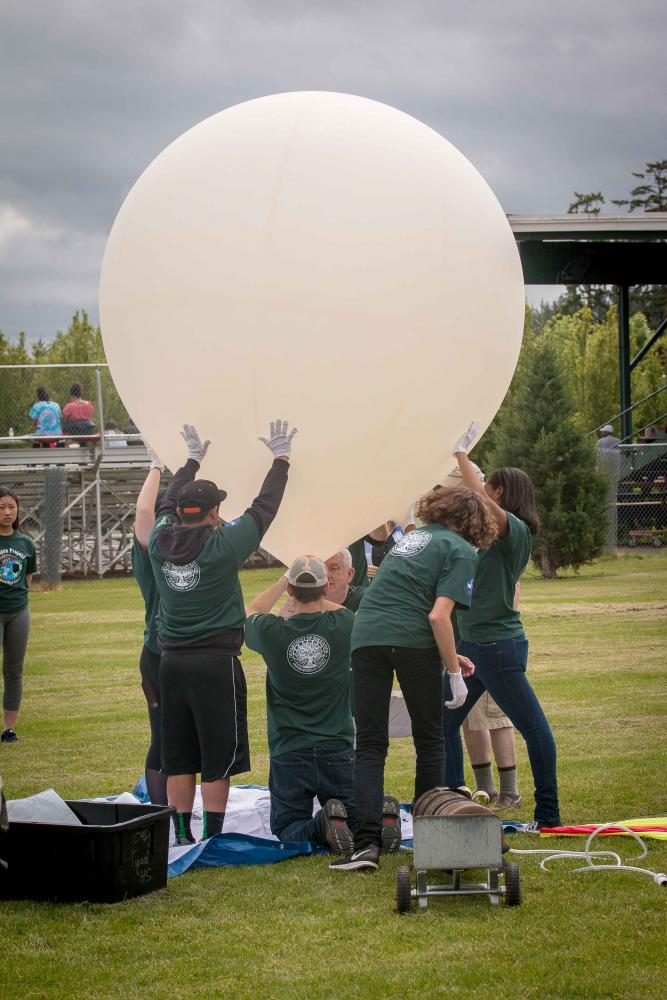 The tech team practices a tethered launch in preparation for the Aug. 21 balloon launch.

As Tech Team Coach Steve Fulton navigates through the remote grassy hills in a four-wheel drive truck, a group of students bouncing alongside him, everyone is starting to get weary. The Flying Tigers had launched their test balloon days ago, but the recovery team is still having trouble getting it back. The ground station tracked the balloon to these hills outside of Madras, but it’s nowhere to be found.

Fulton and the recovery team push onward through the heat and flies, surrounded by trees in poorly mapped territory. The wind picks up, driving away the flies and cooling the air, a temporary reprieve as it also brings dark clouds. It’s starting to rain. Lightning strikes nearby hills. The rain becomes marble-sized hail. Time to retreat and return later to find the lost payload. This may not sound at all like what a technology team would be doing, but it’s just one of the journeys that Tigard’s ballooning team has been on so far.

School may have been out for a while now, but that hasn’t stopped Tigard High’s Tech Team from occupying themselves through the summer. As the Aug. 21 date of the total solar eclipse inches closer, THS’s High Altitude Ballooning (HAB) Team, The Flying Tigers, is preparing to capture footage of the cosmic event and send it back down to Earth.

In March 2015, NASA selected over 55 teams from schools nationwide to participate in a monumental activity. Fittingly named the Eclipse Ballooning Project, the end goal is to film this year’s total solar eclipse from a near-space perspective and stream it live online.

In order to achieve this, each team will be sending a high-altitude balloon 100,000 feet in the air. The balloons are fitted with small computers capable of taking and sending images and video to ground station computers, which will be connected to the NASA livestream website for everyone to see.

Tigard had the immense honor of being selected by NASA as a participant, but getting in was a very difficult task. Steve Fulton, head coach of THS Tech Team, explained that nearly all the other teams in the Eclipse Project come from institutions of higher learning. “There were only six high school teams selected to participate. We were selected because of the reputation of our Tech Team,” Fulton said. “Based on what we have done in programming, robotics and ROV’s, NASA and the Montana Space Grant (lead grant authority) administrators decided Tigard High was worth taking a chance on.”

Fulton chose Jeremy Stephens, Gracie Harestad, Derek Williams, and Tyler Walker to be sent to Montana State University with two coaches, where they learned how to build all the necessary equipment for the project. Jeremy Stephens is a new graduate of Tigard and a captain of the HAB team. “We built it there, and had it shipped and reassembled here,” Stephens said. The Flying Tigers were split into four subunits — a launch team, a chase team to recover balloons after launches, a tracking team, and a media team.

To put it simply, everyone has been doing a lot since they first started this project. The Flying Tigers participated in STEM Fairs at Durham, Templeton, and Metzger Elementaries and Twality Middle School to show off the Eclipse Project to the community and inform students about the coming eclipse.

They were present at two NASA-sponsored bench tests to simulate how their equipment would fare on launch day. The team also conducted a tethered launch of their payload to practice procedures and test the ground station tracking system, and they were at the nationwide NASA Eclipse Ballooning Project dress rehearsal, launching a balloon with a full payload, then tracking and recovering it from its landing position.

The team has also had some unorthodox adventures from time to time, such as the recent journey the chase team underwent to recover the payload after a launch test.

Senior Ethan Gazin is the chase team lead. “The original goal was for them to launch and wait for us to find it and come back. That obviously didn’t work,” Gazin said. After launch, the chase team drove down to the balloon’s tracked location, only to find a locked gate in the way of where they were supposed to go.

They turned back and tried again a few days later, this time taking a different route. Eventually, the team was hiking through a hilly area, looking for the payload amid the trees. “Three hours later, there was still no sign of the stupid thing,” Gazin said. The team ended up dealing with marble-sized hail storms and many, many gates. Two weeks later, after a total of four attempts, they finally recovered the payload and brought it back safely.

The HAB team has been hard at work for thirteen months now. Even with the launch a month away, there are still bits and pieces being inspected or further enhanced; after all, there is never a minute of inactivity in Tigernet. “The ground station has had trouble following the payload as it lands,” Stephens said. “Now we’re troubleshooting after our complete dry run of everything.” Stephens is making sure all is working as it’s supposed to for launch.

Nonetheless, The Flying Tigers are confident and on track for the big day. “I’m excited about seeing it through to the end,” Stephens said. “I can’t wait to watch the balloon go up and stream live on NASA’s website. That’s just amazing.”

Derek Williams is a ground station programmer and tracking team lead. Currently, he is debugging some of the code in the tracking systems. “This project has been very stressful… there’s been a lot of pressure,” Williams said. All the same, he has enjoyed his work and is enthusiastic about the end result. Like Stephens and Williams, everyone on the HAB team is excited to finally see the vision of their hard work become a reality. Now, it is only a matter of time.

As it is such a rare occurrence, a total solar eclipse is an exciting and wondrous event for anyone to observe. NASA’s live footage of the eclipse will be available on http://eclipse.stream.live.

Tigard High School gives a special thanks to these sponsors’ aid in the Eclipse Ballooning Project: