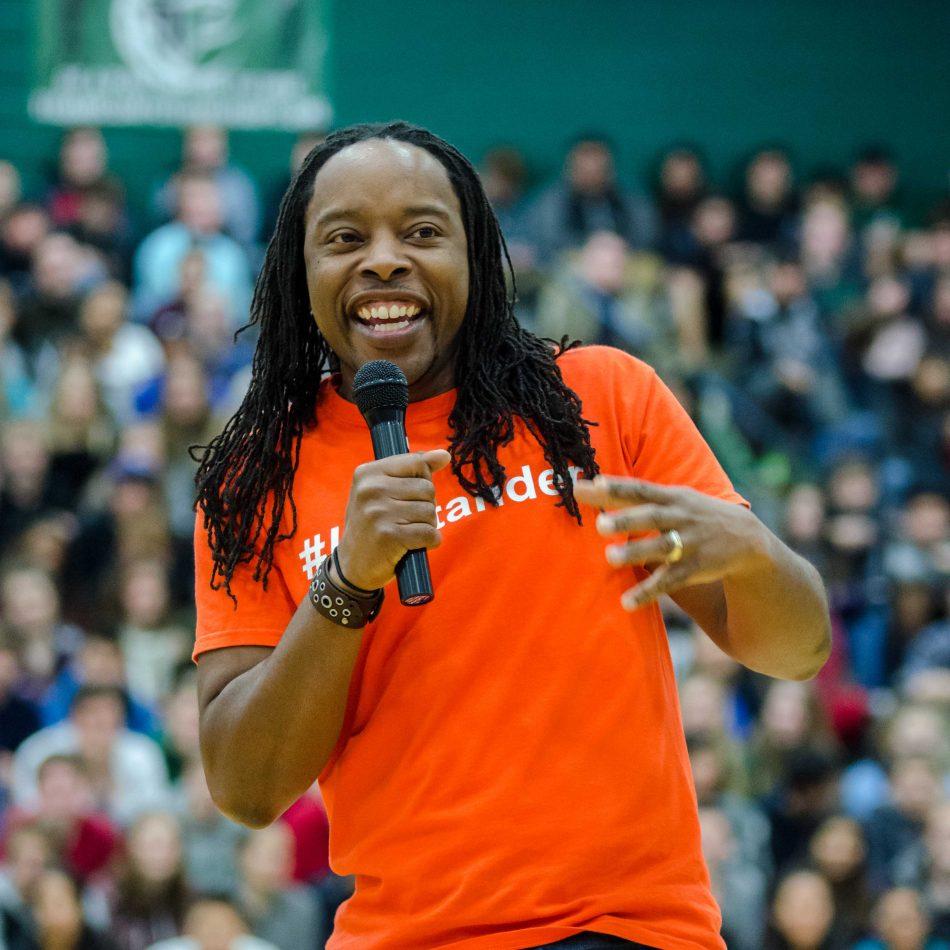 Dr. Dibinga brings his message to the student body of Jan. 5.

The student body assembled in the gym to meet a motivating, optimistic, humorous and inspirational personality — Omékongo Dibinga, PhD: rapper, musician, and motivational speaker. Dibinga had met with leadership students before and gone to many other schools and events as well, even speaking at the illustrious Ted Talks. On Jan. 5 he introduced himself to the audience of Tigard High, who stayed attentive as he told them his life story.

Dibinga talked about his school years and how he struggled with the public discrimination of his name and nationality. He grew up in poverty in Boston, Massachusetts experiencing racism, drug use, and gang fights on the streets. Even though he dealt with these circumstances, Dibinga would not let the society define him, and he strove to become the greatest he could be. “I define my circumstances. My circumstances don’t define me,” he explained. He started writing poetry which evolved into a rapping career, and he eventually evolved to become a speaker whose primary goal is to spread his message all around the world, teaching everyone about diversity, perseverance, and success.

To carry his largest message, Dibinga used two special acronyms — “GROW” for “Give, Release, Overcome, Win” and “FEAR” for “False Evidence Appearing Real”. Dibinga explained that in order to GROW one must give back to the community and society, let go of the problems of the past and focus on the triumphs instead.  He described FEAR as false assumptions or judgments that we sometimes let grow in the back our minds until they prohibit us from doing nearly anything with our lives. Dibinga asserted that in order to GROW, you have to overtake your FEARs.

Dibinga ended with some advice for students. “Never accept the term ‘no’ from someone who doesn’t have the power to say ‘yes’,” said Dibinga. “Your career is what you’re paid for, but your calling is what you’re made for.” In other words, he taught students that  the most important thing in life is to take care of themselves, so they can take care of others. If they strive for what truly makes them happy, they will become the best that they can be.