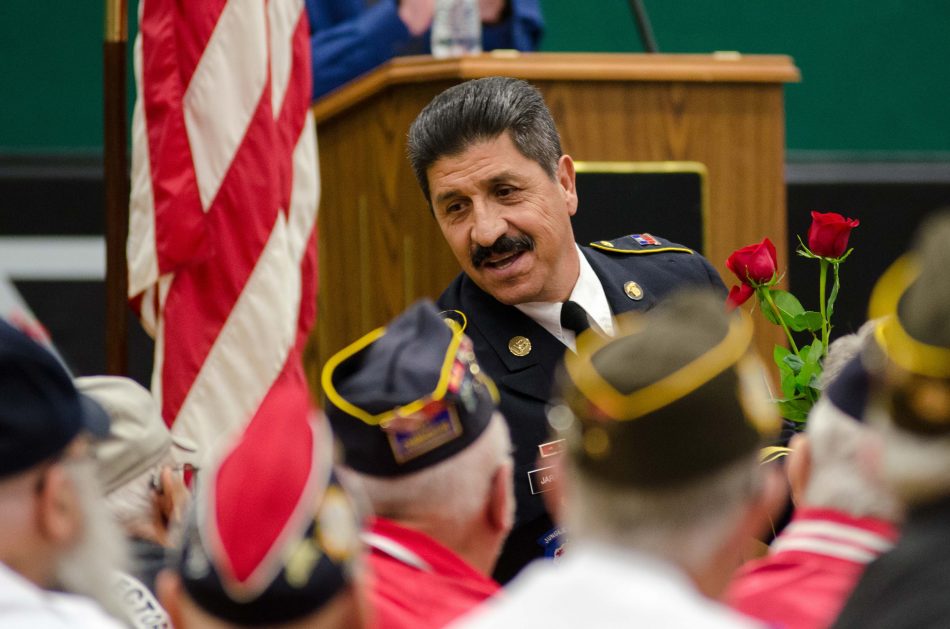 Gus Jaramillo shakes hands with some of the veterans in the audience of the annual Veterans Day Assembly. There were around 75 veterans in attendance.

On Friday, Nov. 4, Tigard High School maintained its over 20 year tradition of recognizing the veterans that live in our community. The assembly took place a week before Veterans Day, but both the students and veterans were there to keep the tradition.

During the assembly about 75 veterans, including four of Tigard High School’s staff members, received recognition for their service from the school. The assembly also featured a detailed speech by Navy veteran Lonn Aldridge. He talked about the impact his service in the military played in his life.

All the veterans were given roses and praised when the school band played the song for every branch of the military. For the first time the assembly also included personal letters by the veteran staff members in the school. These letters were read aloud to the audience.

Gus Jaramillo, an employee and veteran here at Tigard High, was recognized at the assembly and wrote one of the letters. Gus served 28 years in the Army and had a lot to say about his service and Veterans Day. “Black, white, yellow, or green it’s the same,” Gus said when talking about how the military taught him about equality. “Don’t do it just for the education,” Gus advised students thinking of entering the armed forces. “We want someone to fight for us.” When speaking about the assembly, Gus felt honored and believed every veteran felt honored to be recognized for their service.

“I think they did a good job,” Gus said about the student body’s involvement and participation in the assembly. Although the assembly took over 90 minutes to complete, the student body mostly stayed attentive and gave the veterans the respect they deserved. However, Gus noticed a few students in the audience who brought in their backpacks and checked their cell phones and even a few students who had stepped outside to the commons. “You should be interested because you’re in this country,” he said.  For next year he encouraged students to put away their belongings and pay ultimate respect towards the veterans.

On Veterans Day Gus hopes students take their time to pay their respects towards veterans and fly the American flag.

For over 20 years, the Veterans Day Assembly has played a special role in both honoring the veterans and bettering the bond between our high school and the community.