MEChA bonds with other area chapters 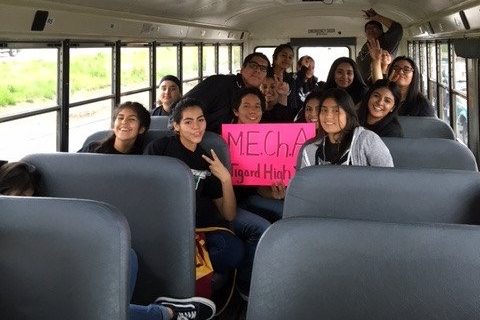 MEChA is a Chicano student movement on a mission to spread cultural awareness; however, the club welcomes anyone and everyone working towards that same goal. On April 31 the MEChA club headed to their annual statewide conference at Gresham High School. At this conference all the MEChA chapters of the state get together to talk about what it means to be a MEChista, what changes they want in their communities and also to hear speeches from people who’ve gone through a lot of the same struggles Chicano students go through.

The entire club was very excited from the moment they stepped onto to the bus to the moment they got back to campus. Tigard MEChA is one of the largest clubs in the state. Number don’t matter as much as involvement. But Tigard MEChA has kept busy and very involved. They were excited to share how much they’ve done this year.

“The MEChA club is like a family; we’ve grown on each other, and that’s the best part because everything becomes 10 times better. Volunteering becomes something we look forward to because we spend that time with people we want to be with,” said sophomore Danicza Olmedo. She’s spirit officer for Tigard MEChA.

The club was loud and proud showing off Tiger Pride. Uniformed in their Tigard High MEChA shirts, they took on Gresham’s club to see who could show the most spirit. The club is composed of many individuals who have an amazing amount of energy. As soon as they introduced them they made sure they would be noticed.

The conference started off with inspirational speeches. Armando Gonzales was very motivational. He talked about boosting the number of hispanic/latino students graduating high school and entering college. Shortly after his motivational speech, all students were able to choose from a variety of workshops. There the students were able to hear from a lot of other speakers talking about serious issues and controversial topics the Hispanic community faces today. These workshops allowed the students to gain knowledge and interest in areas they might not have an opportunity to explore otherwise. there was a college fair, a raffle, as well as the making of 30 second clips to create a “I Am a MEChista because…” video.

One of the main things discussed was an upcoming event. On May 3 all MEChA chapters plan on going to a Portland Public Schools board meeting. All the chapters want to pressure the district into making Ethnic Study classes or Social Inquiry classes more available for students to take, possibly even make them requirement. It’s been helping out the Roosevelt High community. Their students are becoming more mindful of the problems certain minorities face and are learning how to work on a solution together. It’s something all the schools want to have so they can work towards their goals more effectively. “It’s all about being unified and coming together as a community, to create change. We will be there for them the same way they’d be there if we ever need them, we’re all MEChistas,” said sophomore Vladimir Salas, co-vice president for Tigard MEChA.

Other than the thirty members that were able to go, the students were also accompanied by their advisors, Michelle Lira and Sue McGee. They thought the conference was a great experience for the club. “From the MEChA conference this year the big takeaways from our students that I saw was how to get scholarships for college and how volunteerism can really help towards gaining scholarships for college as well as getting college money which was really great to see because I really want to see how many more students we can get going to college after high school, and it was really great to see the unity of all the different MEChA clubs from the whole state and I think that was the best thing, they realized they’re not the only ones out there fighting for their cause,” MEChA advisor Sue McGee said.

The Tigard M.E.Ch.A. club left the conference with the mentality that, they can all work together to achieve the same goal; to create more consciousness of diversity and culture. 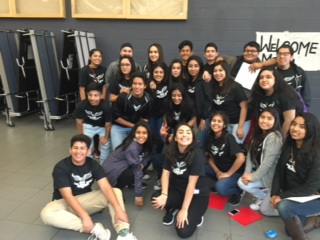