Anonymous Twitter accounts are taking over the feeds of hundreds of students. The trend has been going on at multiple Oregon high schools but recently Tualatin High students created the account “TuHS Matchups” (@TMatchups), and in response, a Tigard version was made.

The account, THS Matchups (@THSMatchups), was created yesterday and already has over 420 followers. Here’s how it works: one anonymous person is behind this Twitter account. Students send in the name of two people, a match-up, and the pair is posted on the account. Match-ups range from jokes like “Mr. Hummel and V-Necks” and “AJ and the press bar” to actual match-ups of THS students. The anonymous head of the account has stated multiple times that offensive tweets will be deleted if it is requested to do so.

The reaction to this account has been massive. Two hours after the account was created, freshman Hannah Alzgal tweeted, “Finally a THS matchup,” which differs from junior Elizabeth “Liz” Prouty’s tweet, “THS match ups was funny until they decided to do mine.”

This “match-up” Twitter account is by far the most successful anon account in the history of Tigard High School. In the past, accounts have been created in an attempt to mimic “Gossip Girl,” where students would send in anonymous gossip. Majority of students did not like the idea of people being able to post secrets like that, and the short-lived account soon became inactive. An account called “Tigard Talks” was also created yesterday, but it has already been deactivated.

The match-up account is not the only emerging anonymous Twitter. THS Man Crushes (@THS_ManCrushes) was created on Nov. 11, but has less than half of the followers THS Matchups has. This account posts pictures of “the beautiful men of Tigard.” Senior Elijah Simon was one of the first to be featured on this account. 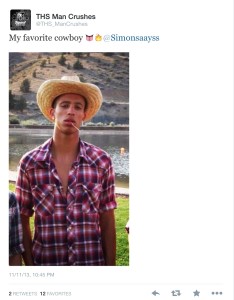 Last but not least, there is yet another anonymous account called Typical THS Students (@typicalTHS), which also has far less followers than the match-up account. Created this morning, the account treats the behaviors of Tigard students like a meme. 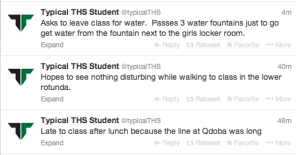 Is there any risk to these tweets, will students end up getting hurt by them? The fate of these accounts lay in the hands of students to prove their maturity.