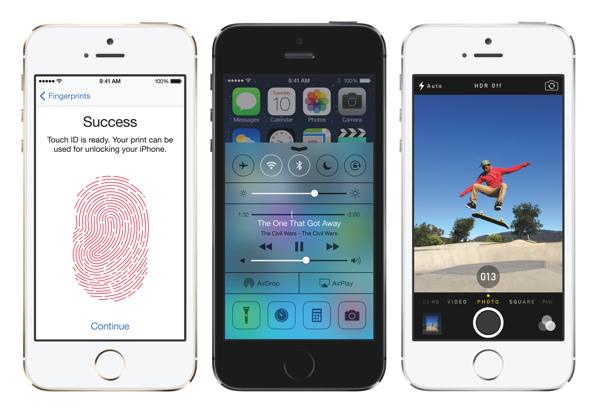 Instagrammers, gamers, and texters get ready, the long anticipated iPhone 5s and 5c released on Friday Sept. 20th. It has been advertised as the biggest change since the iPhone first came out in 2007 and is expected to revolutionize the smartphone market.

Since the official press release by Apple on September 10th, the biggest question on social media has been “Should I get the 5s or the 5c?”

While the 5c does come at a lower cost and in a variety of colors, the 5s has features that might be worth the splurge. For starters, the new 64-bit processor makes the iPhone 5s  twice the speed of the iPhone 5. This may not seem like a lot, but just adding up those extra seconds you spend waiting for Twitter to load every time could easily add up to a few day’s worth of waiting every year that you could get back.

Another feature that makes the iPhone 5s unique in the smartphone market is Touch ID, the fingerprint scanner that takes the place of your home button and allows users to unlock their phone, make purchases, and access secure areas on their phone all with the touch of a button. This may just be the key to getting into your phone right now but with technological advances in the future, users might be able to pay their bank statements or make online purchases by using their fingerprint, making online transactions more secure.

However, before reaching for your wallet to buy the latest version on your favorite device, take advantage of the free update that completely changes the iPhone you already have. IOS is the software designed by Apple to control all the basic settings of your phone, such as the look, settings, and hardware. IOS 7 is the software that comes pre-programmed into the new iPhone 5s and 5c and is available for users to download if they have an iPhone 4, 4S, or 5. Apple completely changed the look of the phone with iOS 7 by bringing in brighter colors and features that almost give it the look of an Android.

“(The software) is easy to use and it looks more sophisticated. It makes me feel like I’m fancy,” said sophomore Paulina Pineda who updated her iPhone 5 recently to get the iOS 7 software. “I like the new pass code and the way your unlock your phone.”

The most talked about addition to the iOS software is the Control Center- a drop down menu that allows you to control wi-fi settings, brightness, and screen orientation all by swiping up from the bottom of the screen. It also has shortcuts to apps and music playback controls. This will make it easier for users to conserve battery by easily changing the brightness and w-ifi settings.

Apple really revamped their products in the past few months, creating a software that will make it quicker and easier to use your phone. Whether you’re in the market for a new device or just wanting to update the iPhone you already have, iOS 7 promises to deliver.