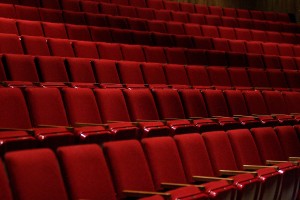 The Good Doctor was a success for Tigard's Theatre students.

The many theatre students of Tigard High really put on a show with The Good Doctor, by Neil Simon. The show times were at seven on Jan. 10, 11 and 12, with one matinee showing on Jan. 12 at three in the afternoon. The play took place at the Deb Fennell Auditorium, and lasted for about two hours.

This production wasn’t like any other that Tigard High has done, as it was the first and only completely student done play. This factor only added to the immense work that is put into preparing for a play, but the actors and crew didn’t show it. “It was quite frightening. But we all did very well,” said Tigard High Senior and Producer Nick Bussey.

The play was about a writer, played by Paul Harestad, who isn’t sure if he has chosen the right profession, but then starts to tell you about some of stories. There were nine scenes total, all which depicted some of his writing. They included The Audition, where a young woman, played by Maddie Pedersen, has traveled long and far to have just one audition for a play, and A Quiet War, in which a man retired from the Navy, played by Mitchell Stephens, and a man retired from the Army, played by Nina Williams, meet at the same time every week to argue about something, as they cannot agree on anything, except to meet again the next week to argue again. “This play contains scenes of romance, depressing scenes, emotionally touching scenes, dark scenes, and scenes that will make you ponder; we all go to the theatre for different reasons, but this show truly has something in it for everyone to enjoy!” Bussey commented on the show.

Many students showed off their fine acting skills, including Paul Harestad, who played the lead character in the play. Harestad played the Writer, who narrates the entire show. When asked what personally was the hardest part for him in preparing for the play, he said, “I would say the lines were a challenge, and cramming them in for the showtimes.”

Many of the people who starred in the play and worked behind the scenes are part of Tigard High’s Thespian Troupe, and are all working towards going to State. “All of the extra funds will be going to help our Thespian Troupe get to the State level in the Spring.” Members of Tigard’s Thespian Troupe include Jezeth Zaragoza, Emily Shook, Connor Bussey, and many more.

Bussey commented that everything went as well as he had hoped, only that the turnout of people wasn’t ideal. But people have many more chances to turn that around, with many upcoming events. Members of the theatre here at Tigard are still hard at work after this production, as they have many upcoming events this Spring. There will be the Theatre Showcase on Jan. 15, and Ink 4: The Empty Chair on the following dates: Feb. 7, 8, 9, 14, 15, 16. Later this Spring, there will be a production of Our Town on May 2, 3 and 4, and another Theatre Showcase on May 28.