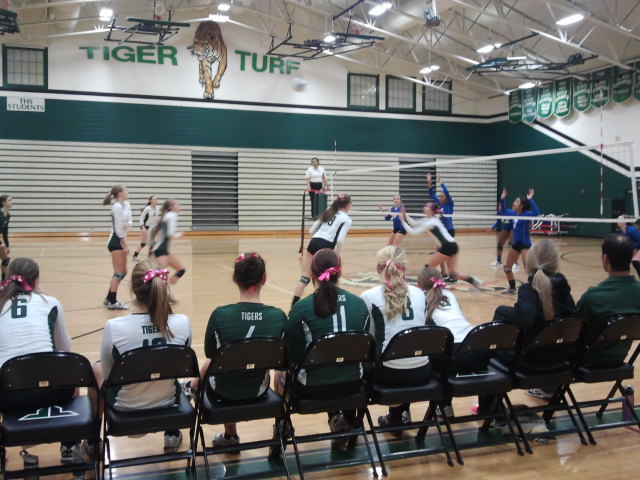 After never making it passed the first round of playoffs, the Tigers came back and creamed Grant by beating them in the first three games.

“The best games are when we’re having fun and working together as a team. We definitely did that in this game,” said outside hitter, Valerie Hughes.

Grant never even scored above 12 points in any of the three games. The scores were 25-11, 25-12 and 25-4. There were so many highlights for the Tigers, such as great blocks, a couple of aces, and some good kills, especially by junior Lindsey Rosette. She had a total of 14 kills in all three games.

“I was proud of everyone because they all played so well and finally got us through the first round of playoffs,” said outside hitter Lindsey Rosette.

Another player who scored a lot of points for Tigard was middle hitter, Michelle Simmons who is the tallest person on the team. She had some amazing blocks and hits that were almost straight down.

“It was an intense game, but we came through and smashed their faces in,” said Libero, Jenna Horton.

Cassie Erickson said that Grant had some good hits, but Tigard had better ones.

“I could tell that Grant wanted to win the game, but we wanted it more,” said setter Lauren Becker.

Head Coach Rob Coelho thought that their effort showed up in their playing and he hopes that they will play this well in the second round of playoffs.